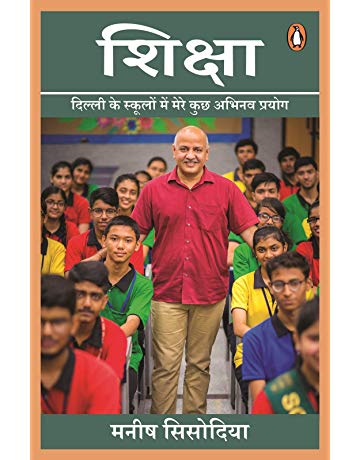 Excerpted from ‘Shiksha, My Experiments as an Education Minister’ by Manish Sisodia….

The happiness class has had such a spectacular impact in Delhi that it has created a nationwide curiosity. People want to know what this model is that is being run for almost 8 lakh students for one period every day. How is happiness being taught like maths and science? Is it possible to make children happy by teaching them happiness like a regular subject? Can it create a mindset in students to make them more positive and creative? What have the results been? It is too early to answer these questions as this curriculum is merely a year old. Only time will tell. However, initial results were as interesting as these questions. When I go to schools and talk to principals or teachers of classes – for nursery to class 8 – they always comment on how this program has changed the behavior of students in just one year. This is true especially of students of classes 6 to 8, as it has been noted that their aggression has gone down and they are calmer. Some teachers even say that the level of concentration has increased in students of this age group. Here are some of the most interesting anecdotes:
• The mother of one our students told a teacher that her child had become very understanding at home. Before eating food, he asks is mother if there’s any for her. Sometimes he even checks in the kitchen to see if there really is food left for the mother or if she is lying to feed her children.
• A grandmother told us that she has seen a tremendous change in her grandchild in the last one year. According to her, the child, who used to fight with the other children in the neighborhood, has changed and he shows them a lot of love and respect.
• Recently, a reporter from a well-known newspaper went to a school for a story. He asked the students whether they talk about the program at home. A student told him that one evening when his father came home dejected, he conducted a session of the happiness class at home as he thought that it would calm his father.
• One incident I can’t forget is when a girl told me about how the happiness classes had given her peace of mind from the strife at home because of her being a girl. She told us that her brother, being a boy, was sent to a private school while she was sent to a government one. Not just that, in school, she would often stew with resentment because of the favoritism shown to her brother at the breakfast table. Since the happiness class started, she has been able to leave her resentment behind in the very first period. It helps her focus on her studies. It is saddening that this discrimination is happening even in the capital of the country but it brings me joy that the happiness class is bringing some respite.

THE seeds of the happiness class were sown in a conversation between Arvind Kejriwal and me. I still remember that we were in his drawing room, discussing a few things related to the education department. He interrupted me and said, `Buildings have become better, teachers are being trained and their self-confidence is also increasing. As a result, exam results have also been improving but before getting into politics, we always used to talk about making children better human beings, why is nothing is being done on that front?’ What he said was true. All our focus had been on repairing buildings, reinvigorating teachers and improving results. We are doing nothing to make our students better human beings. This thought stayed with me and probably, subconsciously, I decided to work in this area. We conducted many Jeevan Vidya workshops for our teachers and even sent them for Vipassana courses but students were into involved in these initiatives. All our focus was on teachers and we were all ganging up to turn the children into bookworms. We didn’t have any Vipassana or Jeevan Vidya workshops for the children. The CM’s question had got me thinking. I mulled over this words even while performing my daily duties. I thought up the framework for the happiness class during a ten-day Vipasana course that I had attended. I would like to mention here that there was no access to pen and paper, and talking over the phone, in fact, talking in these ten days was also prohibited. This is why I could make notes only in my mind. The biggest inspiration for the happiness class came from the coexistence-based Jeevan Vidya workshop, which looks at all the aspects of education and life very critically and discusses it very scientifically.

IN my opinion, there are two aims of education – to make people learn the ability to live happily and to help others live happily. That is what the ultimate aim of education, from nursery to college, is. When I say this, I am often asked if science, geography, history, literature aim to lead to happiness then why have the happiness class? What is the meaning of happiness for our students at the present and in their future life? What does living happily with others mean? Can happiness be measured? Can happiness be compared? What is the science of happiness gained from comparing with others and happiness elicited from within? Is happiness synonymous with materialistic things? Answering these and similar questions scientifically after looking at your surroundings is what the happiness class is.

LET me state outright what the happiness class is not. There are no moral science lessons in this curriculum. It doesn’t involve any activities that would get children excited for some time. There’s no chanting or praying. A joint team of twenty Delhi government teachers, District Institute of Education and Training (DIET) lecturers and principals, some reputed individuals and organisations working in the area of child psychology created the content for the happiness class. It’s based on the principle of the self-confidence building mode of education based on the coexistence model. What was also studied during its conception as why the adoption of the leadership-oriented system of education was not making people happy. Where had we failed in our efforts? After considering and deliberating on these points, this curriculum as prepared. We took the help of scholars and researchers working on different aspects of an education that builds a positive culture in the country. The curriculum is based on Indian thought and education in which we have merged science.
The three main aspects of the happiness class are:

AS luck would have it, I participated in the international conference in Moscow again in December 2018 where I shared my experiments with and experiences of the happiness class. This time, education ministers from seventy countries had been invited to talk. Many countries showed an interest in the curriculum and have kept in touch. The Moscow incident is important to show that at a time when India is dealing with all these issues, it is possible to look for solutions to them in the happiness class. It has shown how these manmade disasters can be averted through education. I have said many a time that education is not about making buildings or modern classrooms or adopting technology in classrooms. These are its needs but not its achievements. Education’s biggest achievement is that it can foresee future problems. Find solutions and prepare future generations for them. To me, the happiness class is a big and important step in this direction. There have been well-being, school and leadership education experiments across the world. Happiness classes have been organized too but their scope has been limited. These are usually limited to students in just a few schools. They mostly run for a month or for one or two classes in one month. Organizing happiness classes from nursery to class 8 for one year every day across 1000 schools, for 8 lakh students by 20,000 teachers is a large-scale project.

From a spiritual point of view, 8 lakh students do mindful meditation for five minutes every day. Even thinking about the knowledge emerging form its positive energy is exciting.