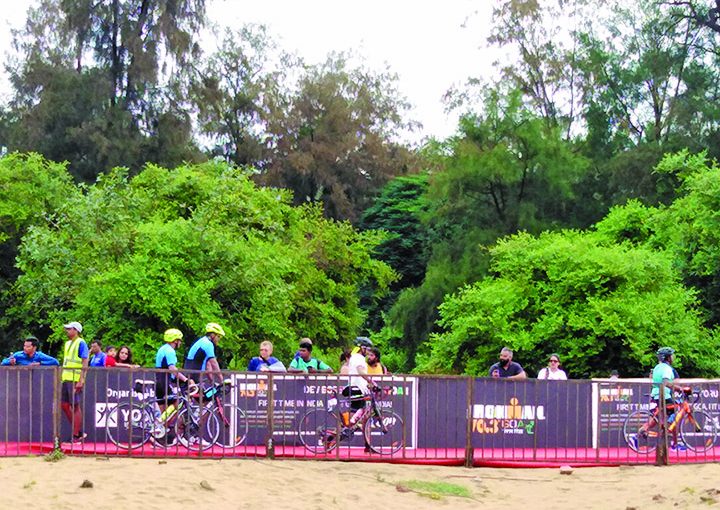 Swim, pedal, run! That’s what the Ironman 70.3 triatholon is all about — a challenge to stay fit and happy in search of the ultimate adventure (not to forget prize money for those who’re strong and fast)…\

IT was a treat of an event to watch. The country’s first Ironman triathlon was in town and at first I thought it was some kind of a marathon (marathons have caught fire in the country with more and more folk seeking fitness, adventure and life’s joie de vivre as the French say), then learned from a friend that a triathlon was different because here participants or rather contestants (for big money prizes!) had to swim, cycle and run. The Ironman Triathlon is one of the world’s toughest endurance sports events.
Mercifully the Sunday of Oct 20, 2919, dawned to fairly sunny skies and the Miramar Beach vicinity was abuzz with excitement over the weekend with contestants arriving with family and friends in tow, seeking accommodation around about the beach area…it was a pleasure to see the Campal Promenade spruced up, and my friend Chef Samir at the Fortune Miramar excitedly confided they were fully booked up, “I’m making 1,000 packets of vegetarian biryani to be distributed to the Ironman athletes and organizing team tomorrow…come and get some if you want!” Ever generous chef!

The Ironman Triathlon which presents itself across 27 countries worldwide and is brought to India and Goa by Yoska, a Bengaluru-based fit-tech company. There is big prize money at stake and contestants have to pay something like 22,000 to participate…which reminds me one of the contestants from Maharashtra who made it to the finish line was on a high, Dr Shilpa Date Kale, she quipped to a query, “I finished third in my age group for women…I love it here, the route was great and Goans are so friendly! Of course we have to pay to participate…and it is quite expensive, there was a banner up along the route urging us with the message,You have to finish, you paid a lot!’ I liked it!”
Both Shilpa and her hubby Shriniketan are doctors and love to participate in marathons and triathlons by way of recreation and not to get stressed out courtesy being doctors! The couple were in a happy mood and busy posing for photographs en famille on the Miramar beach sands, children and proud parents anxious to get selfies and pictures for remembrance.
This was the 2019 Ironman 70.3 Goa Triathlon and the organizers must have thought Panaji with its Miramar beach frontage ideal for such an international event — this is actually what a half triathlon in which contestants young and old, men and women had to first do a 1.9 km loop swim course off the Miramar beach shore, cycle 90 km along a bike route taking them across the city and along the Mandovi bridge and finally run a 21-km course taking them to the Dona Paula jetty and back to Miramar beach, finale event at the Marriott Hotel nearby.

It was Rahul Zetshi, another contestant, who enlightened me that it was only a half triathlon, a full one is called “140.6” and he has participated in one full and two halves, “Why do I do it? To stay fit! I started running five years back and in 2017 discovered the triathlon. This time I finished to the podium in 7 hrs (eight and half hours was the cut off), usually one has to finish the entire course in about seven hours or so, definitely the cut off time is eight and half hours…after that it kind of means you’re out of the competition and can take your time clocking in!” Yes, of course, both endurance and speed matter to win the big prize money, “I’m a hotelier with Lemontree in Bangalore…my wife and two daughters sometimes come along with me for these events…yes, I lose a lot of money on this, 30,000, a full triathlon could be even priced at50,000.” Since he was a Kashmiri guy I couldn’t resist asking him what he thought of what’s going on in Kashmir and he sighed, “It’ll take some time but I’m sure things will be normal soon.
AN EARLY RISER I’d gone out to Miramar beach early at 7 am when the swimming laps on the beach were underway, said hello to Chief Minister Pramod Sawant, who was there bright and early to see the event kick off. He was all smiles and said Goa welcomes all such sporting events, “It’s a matter of pride that contestants from 27 countries are here in Goa…” I teased if he would like to participate in the Ironman Triathlon and he smiled, “Of course, why not, let’s see, maybe next year!” Being a young chief minister he can really think along fitness lines and promote fitness amongst his colleagues.

I am reminded of the genial Prime Minister of Netherlands Mark Rutt who goes to work on a cycle and recently even turned up at the airport to welcome French President Emmanuel Macron to take him for bicycle entourage sightseeing! Is this ever going to happen in India or for that matter Goa? Most of our politicians suffer from a terrible British time or Portuguese time colonial mind-set (or should I say rajasic and tamasic mind-set)! But wait and see, things may yet change for the better if not worse.

Who won the recently held half Ironman Triathlon 70.3 in Goa? The first person to finish the race within 4 hours, 42 minutes, 44 seconds, as Hawaldar Bishworjit Singh Saikhom, 27-years-old athlete from Manipur, who reportedly competes in triathlons regularly; coming in second was Nihal Baig (alumni of IIT Bombay), with Mahesh Mourembam, school teacher from Manipur, making third place. Veteran Swiss athlete Natascha Badmann won the women’s overall race and she is a familiar face in the Ironman Triathlon being a six-time world champion. Saikhom gets invited to participate in the Ironman 70.3 World Championships to be held in Taupo, New Zealand next year.

I’m told about 1,000 contestants registered although only 700 finally participated and by one report there must have been at least 40 Goan contestants…(sigh)…I wished I’d gone for the valedictory function later in the evening. Goans are becoming more fitness conscious! I hear the names in the just over Ironman in Goa were Wilbert Egipsy (a regular marathoner), Alice Pereira, Ayesha Pinto, Agnelo Desa, Nisha Madgavkar is an Ironman…don’t women triathlon contestants become Ironwomen, I asked, and they laughed, no they don’t, even the women remain Ironman, that’s protocol. A group of Indian women contestants at Miramar beach were laughing over this.

This is to say India’s first ever Ironman triathlon ended on an extremely happy note and I’m all for more sporting events making it to Goa, they are by and large very inspirational and eco-friendly! Apart from Ironman Triathlon there’s all this halabaloo going on about whether Goa should or should not have a marina or two for sailing boats to anchor — I don’t see how a marina will spoil the fishing scene in Goa, surely Goa can do with a marina or two because sailing and water sports are ideal sports to promote amongst Goans.

Sailing is a big-time sporting and leisure activity out in Europe and other places abroad with just about everyone wanting to sail the world for a lark or so to speak. Although I’m not sure how many sailing adventurers would come anchor in Goa for a while… is Goa such an exciting place for adventurers of the seafaring kind, or is it? For insight into this go ask Goa’s sailing godfather Cesar Menezes of Wallace and Indy Pharma! On that note it’s avjo, selamat datang, poiteverem, au revoir, arrivedecci and vachun yetta here for now.