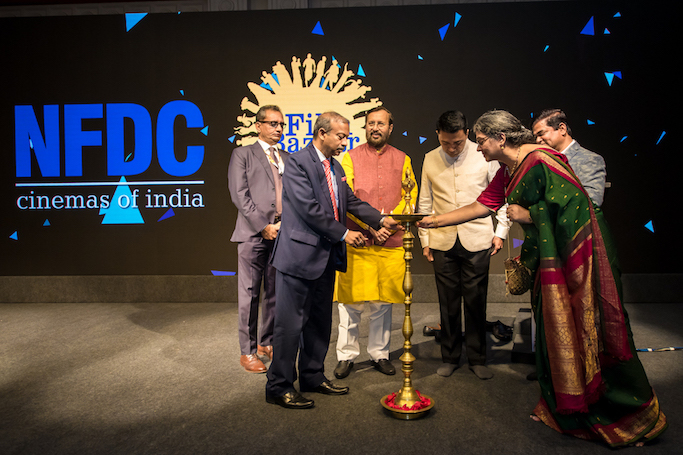 The 13th edition of South Asia’s largest film market, NFDC’s Film Bazaar 2019 is being held from 20-24 November 2019 at the Marriott Resort in Goa, India. It was declared open by Union Minister Prakash Javadekar with Chief Minister Pramod Sawant and MoS for Environment, Forest and Climate Change Babul Supriyo also present along with other dignitaries from the Indian and international film fraternity.
The occasion also saw the launch of a promotional film on NFDC’s Film Facilitation Office by Union Minister Prakash Javadekar in front of the packed room of industry participants. The film highlighted the breadth of international films shot in India as well as the new initiative of single window clearance.
The ‘Knowledge Series’ is a series of specially curated presentations, panel discussions and lectures by filmmakers, producers, top executives of film organizations involved in content production, aggregation and distribution.
Prasoon Joshi and Siddharth Roy Kapur will be seen discussing ways to empower the youth with skill development in one of the panels, while Vani Tripathi Tikoo will be in discussion with Shobu Yarlagadda (Producer of ‘Baahubali’) and Vishal Bhardwaj on cinema inspiring entrepreneurs. Another engaging panel will have Soundarya Rajinikanth and Nandita Roy amongst others discussing the changing role of women in Indian cinema, while film critic Anupama Chopra will be seen engaging Josh Seigel, Curator, Dept of Film MOMA (The Museum of Modern Art), New York in a conversation. Others industry participants on the various panels include actor Sanjay Suri, cinematographers Shanker Raman and Tapan Basu, screenwriters Atika Chohan, Kanika Dhillon, and filmmaker Sharat Katariya.
New additions at Film Bazaar this year include a separate segment titled “Behind the Silver Screen, Empowering the Aspirants” focused on skill development for students. This segment will have a series of workshops by industry veterans such as Actor Adil Hussain, Filmmaker Meghna Gulzar, CBFC Chairman Prasoon Joshi, Vani Tripathi Tikoo, Puneet Krishna, Rajiv Krishna Menon, Subhash Ghai, Shylaja Chetlur.
Also for the first time WIP lab projects will get a chance to pitch their films to potential investors, producers, sales agents, distributors, festival programmers in an Open Pitching session at the venue.
Another addition is the ‘Producers’ Workshop’, which is remodeled this year into an adaptive space for producing professionals in early stages of their careers. This year 20 projects from USA, Sri Lanka, Bangladesh, Taiwan and India have been selected to participate in the workshop.
The ‘Viewing Room’ is designed to present films seeking finishing funds, world sales, distribution partners and film festivals to film programmers, distributors, world sales agents and investors. Those interested can view the film on individual computer screens in segregated booths. This year 213 films will be available to view in the Viewing Room Library of which 154 are feature films and 59 are short films. 89 out of 213 films submitted are debut features. The films are in more than 30 languages including languages like Maithili, Sinhala, Galo, Gojri, Bodo, Gondi/Muria.