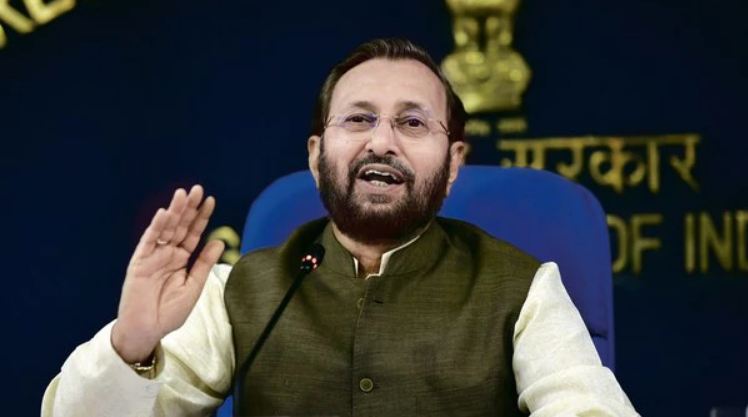 RUTHLESS: To ensure that the BJP is able to win six of the 15 seats for which by-elections are being held in December, the Minister for Water Resources Prakash Javadekar has permitted the Karnataka government to divert the waters of the Mhadei river

The Center has betrayed Goa on the diversion of the Mhadei waters to placate Karnataka where by-elections for 15 seats are due on December 5. The BJP has to win at least six seats to stay in power…

On October 23, Environment, Forest and Climate Change Minister Prakash Javadekar announced on Twitter that the “Kalasa-Banduri drinking water project in Karnataka has been granted Environment Approval”. Javadekar deleted the tweet subsequently, but Goa Chief Minister Pramod Sawant led an 11-member all-party delegation to New Delhi to demand that the clearance to the project be withdrawn.
On Twitter, the CM, who belongs to the BJP, posted: “[River] Mhadei [the water of whose tributaries, Kalasa and Banduri, Karnataka wants to divert to the Malaprabha basin in Karnataka] is more than mother to us. We shall protect it at any cost. Officially Govt. of Goa is not aware of any EC [environmental clearance] having been granted to Karnataka affecting Mhadei river.” Sawant vowed to “defend the interest of the people of Goa and the state at any cost”, and announced that “In case such EC is issued without hearing State of Goa, we shall challenge the same before appropriate forum including NGT”.

The river and dispute

The Mhadei (or Mahadayi/Mahadeyi) rises in the Western Ghats in Khanapur taluk of Karnataka’s Belagavi district, and enters Goa in the Sattari taluk of North Goa. Several streams join it along its course, and the river grows in volume to become the Mandovi, one of Goa’s two major rivers, before flowing into the Arabian Sea at Panaji.
Two-thirds (76 km) of the 111-km Mhadei flows in Goa (where it is called Mandovi). Since Goa’s other 11 rivers hold salt water, the sweet-water Mandovi is crucial to water security and ecology, and an important source of fish. The Mhadei/Mandovi basin, along with its tributaries and distributaries, nourishes Goa and contiguous areas of Maharashtra and Karnataka.
Tensions over sharing the Mhadei’s water started in the 1980s and escalated through the early 1990s as Karnataka designed several dams and canals to channel water to the Malaprabha basin to address endemic water shortages in its northern districts of Belagavi, Dharwad, Gadag, and Bagalkot.
Goa asked for a Tribunal in 2002 and, four years later, moved the Supreme Court. The Central government set up the Mhadei Water Disputes Tribunal in November 2010.
In August 2018, the Tribunal awarded 13.42 thousand million cubic (TMC) feet from the Mhadei basin — including 3.9 TMC feet for diversion into the depleted Malaprabha basin through the Kalasa-Banduri project — to Karnataka. Goa and Karnataka have both challenged the award, and the matter is pending in the Supreme Court.
The latest escalation

In April this year, the Karnataka Neeravari Nigam Limited (KNNL), the state government company in charge of all irrigation projects, submitted to the Union Environment Ministry documents related to the Rs 840-crore “Khalasa Bhandura Drinking Water supply Scheme” that proposes to divert 3.90 TMC feet of “water flowing [in] streams/nalas in Mahadayi basin to water deficit Malaprabha basin by construction of three diversion dams across Haltara Nala, Kalasa Nala, and Bhandura Nala”. The project, the KNNL said, “is exclusively proposed for drinking water facilities to Hubli-Dharwad towns, Kundgol town, and en route villages as part of commitment to National Water Policy 2012”.
On October 17, the Ministry confirmed Karnataka’s request for waiver of provisions of the Environmental Impact Assessment (EIA) Notification, 2006, provided some steps were followed. This upset Goa, and the delegation that met Javadekar on November 3 expressed “shock and surprise” at the Ministry’s response, and accused Karnataka of misrepresenting facts before the Centre. Environmentalist Rajendra P Kerkar of the Mhadei Bachao Andolan, part of the Goa delegation, argued that the proposed project falls “within the ecologically sensitive area identified earlier by Karnataka Forests Department and the Western Ghats Ecology Expert Panel headed by Dr Madhav Gadgil in their report in 2011 and subsequently the high level working group appointed under the chairmanship of Dr Kasturirangan in their report of 2013”.
The delegation said part of the project falls within the eco-sensitive zone of Bhimgad Wildlife Sanctuary, and the dam site was just 231.27 mts and its canal systems just 3.17 km from Mhadei Wildlife Sanctuary — all of which required it to go through the EIA process.
Kerkar later told The Indian Express that most of Goa’s paddy farming is by the khazan way, which requires the water to be of a certain level of salinity. “Of the 12 rivers in Goa, only Mhadei fulfils the needs and if seawater ingress happens in a weak Mhadei, we stand to lose our entire paddy cultivation,” he said.

Politicians on both sides in Goa have sought to link the Ministry’s approval to the project to December 5 Assembly by-elections in Karnataka. Several of the 15 seats up for grabs are in the Malaprabha basin.
“Everyone should understand that bypolls are scheduled in that state (Karnataka). There could also be fresh elections in that state. Political situation is not very good over there. But we should not get distracted by any letters issued to them,” Goa Ports Minister Michael Lobo told a press conference.
Lobo claimed such letters have been issued by the Centre “time and again”, sometimes for “political reasons”. Ahead of the Karnataka elections of 2018, former Goa CM Manohar Parrikar had, in a letter to then Karnataka Opposition leader B S Yediyurappa, shown willingness to consider Karnataka’s request for water for its northern districts.
Parrikar’s letter had followed a meeting with BJP president Amit Shah in New Delhi, where Parrikar and the BJP’s state heads in Maharashtra and Karnataka were also present. And Javadekar in his tweet last month acknowledged the “follow-up” of Union Minister Pralhad Joshi, BJP MP from Dharwad, of which three of the bypoll seats are part.