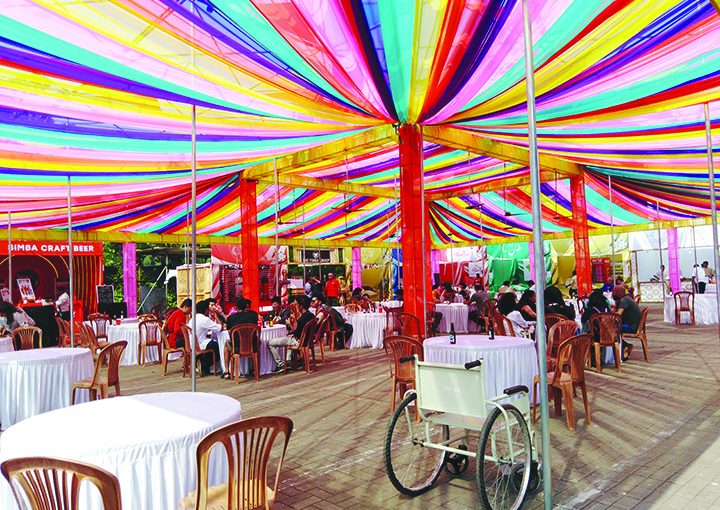 DON’T ask me how in a moment of nostalgic weakness I found myself tucking into a heavy Kerala paratha and tapioca bhaji at this year’s IFFI food courtyard. I hadn’t tasted these Kerala paratha in years but remember a phase during my schooldays in my old home town of Penang in Malaysia, when I loved dropping by at a Sri Lankan eatery on a good day just for the crinkly hot Kerala paratha smothered with accompanying vinegary onion-kothmir-green chili pink relish! That was enough for me, although there were other things like chickpea curry, egg curry, chicken curry, etc, to go with the Kerala paratha.
So when I saw them last week at the Benzys Kerala Restaurant outlet at the IFFI food courtyard at INOX complex, after I was done with my day’s viewing of films, I couldn’t resist ordering. The paratha pile had softened somewhat (lost hot crispiness like I like them) but together with bowl of red chana curry and relish of spring onion-green chili-lemon juice, made for a filling dinner before going home. A treat for 150. IFFI courtyard and eating was functional this year but the courtyard was a prettily done-up affair, roasting hot temperature in the afternoons though and most were quenching their thirst with the beers and wines on offer. Benzys had other things on the menu apart from Kerala paratha like puttu, fish curry, fried rice, chicken roast, egg roast, etc, and the guy here even offered to make me a masala dosa if I was vegetarian. A friend with me who’s from Kerala piled her plate high with Kerala paratha, tapioca kappa or mildly cooked sabzi, bowl of chicken roast…and rejoiced. Since there were so many IFFI delegates from Kerala (some 2,000 according to one estimate) they must have been happy to see the Benzys Kerala food outlet. Of course the food court also offered other stuff like some delectable fish and chips (classic Brit), rawas kebab, prawns biryani, fried shrimps and so on, another hot favourite. I generally stayed with the one Sateri Goan Food stall (all the way from Netravali, Sanguem) offering a menu of chicken xacuti, regular fish curry-rice, satva, xirvolyo with coconut juice, kanda bhaji, wada-pau, rava upit, poha…etc. The radish or mooli bhaji looked so tempting one lunch that I took a veg combo meal of rice-mooli bhaji, dal, papad, pickle kokum tival (150).
There wasn’t too much at the IFFI food courtyard this year and seating was a problem with everybody dragging chairs so that tables stood solo! There was a Taj Aguada kitchen outlet offering some piece de resistance fare and I played with the idea of pindi chole but skipped it because I hate eating something great with mundane white bread pau although in this case they were offering some fancy rolls. Nobody offered the Goan poie for love or for money and I had a flashback of when the late Vishnu Wagh was IFFI chairperson and he got his wife Aruna Wagh to get a whole lot of self-help group women to lay out a feast of genuine Goan fare… Goans and non-Goan delegates had a rum time eating and burping in the auditoriums over a post-prandial lunch! I generally avoid booking for post-lunch films.
The Kala Academy canteen where I love to pass time has come a long way and to my surprise one morning I found some terrific batatwada with terrific coconut chutney, so good I asked for more and the guy here promptly charged me 10 extra for a tablespoon of extra chutney. Also,10 samosa became 15 the next day. But then I suppose everybody has the main idea of making more money during IFFI time in Goa. If there was no money to be made there would be no IFFI, right? One thing I really loved this IFFI were the water carts set up at all venues: these dispensed30 worth of bottled water, but it was a one-time payment, after that water refill was gratis, just hang on to your bottle with the blue ESG marking on it. Never mind that at the auditorium entrance one was required to leave all water bottles outside… and after the film was over while collecting one didn’t know whose bottle was whose because of the sameness! Anyway, this is to say golden jubilee IFFI 2019 was the most ever eco-friendly IFFI and a salute for that.
Nothing left to say now … except that after watching some films big on the grandeur of silence this IFFI, I’ve got very tired of and exhausted with…er…words, superfluous words, noisy words. No more words. Don’t talk of stars burning above and all that jazz, if you love me, just do it…hey, take a look at some of my roll call of pictures here and be happy. IFFI week in Panaji I have to keep reminding myself that life is not a film no matter how many or few films I manage to see (in the working woman’s diary of life, and so sooner or later I must get back to ground level where a sort of sword of Damocles hangs perennially over my life these days.