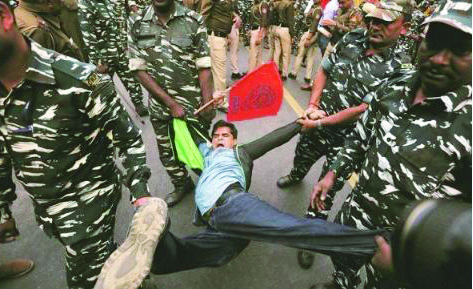 SET BACK: The huge hike in fees is a major set backs to poor and backward class young boys and girls as J&U is the only institution which not only offers schorships but exempts poor children from college and hostels fees

The inequality in India’s education system gets a shot at redemption in the country’s public universities, which give students from different backgrounds a window to a more democratic future. As proposals of fee hike meet with protests, a look at how access to subsidised higher education has fuelled dreams and opened up opportunities for the disadvantaged

Till three years ago, it was life as usual for Suraj Tiwari. His father worked as a tailor in Mainpuri, Uttar Pradesh, where he would rafoo (darn) torn clothes. The income wasn’t much, but Tiwari, 25, and his elder brother both worked as blue-collar employees in big corporate plants, and managed to earn 12,000 per month each to sustain the family. Then, it all unravelled. Tiwari was in a train on January 29, 2017, when he slipped and fell on the tracks. He was rushed to the AIIMS Trauma Centre, where his treatment lasted four months. At the end of it, he had lost both his legs from knee down, his right arm till the elbow, and two fingers of his left hand. His treatment, he says, cost around14 lakh, of which around `8 lakh was from a loan taken by his father.
“I remember feeling like a burden. I didn’t know what to do. It was during my time in AIIMS that I came in contact with Akshansh Gupta University alumnus who has cerebral palsy). He told me to study and prepare for JNU. He gave me books. I suddenly saw a ray of hope,” says Tiwari, who is now a student of BA Russian at JNU.

But there were more setbacks. In May that year, he appeared for the BA foreign language course at JNU. A few days later, he got news that he had lost his elder brother in a road accident. The family lost two earning members in a short span of time; Tiwari’s father soon fell ill and required surgery. To add to it all, in July, Tiwari also got the news that he did not clear the entrance exam. “I had lost my limbs and brother, our economic condition became very bad. At that time, I lost the will to live. I wanted to take my own life. Par main toh iss layak bhi nahi tha ki khud se mar sakoon (I wasn’t even capable of killing myself),” he says.
That’s when things finally looked up to him. JNU had decided that year to hold entrance exams twice a year, in May and December. “When I got to know I had another shot, I gave it my all. For three months, I only studied and appeared for the December exams. When I finally got through, I was on top of the world. For people like me, there is no life without education,” he says

In JNU, Tiwari gets 2,500 every month as his Merit-cum-Means (MCM) scholarship and another2,500 each month as escort allowance. There are still times, when despite his scholarship and allowance, he hasn’t been able to pay the hostel fee but people have always helped him out. “Whether it’s giving me money when I don’t have it, or helping me in other ways, students and teachers here have golden hearts. I am preparing for IAS now. This university is heaven on earth for me. It has given me everything. Whatever I become from here on is to JNU’s credit,” says the resident of Kaveri Hostel.
His story is one of courage and hope, of finding wings to fly up and away from a pit of despair. It’s his story but it’s also the story of thousands of students across India from marginalised backgrounds whose lives changed forever once they entered a government college campus. It’s the story of students whose dreams of higher education were realised only because of subsidised fees, which is why the spectre of a fee hike has got campuses up in arms.
There are others like Tiwari. In 2015, Akshansh Gupta, 36, hit the headlines, for being a person with cerebral palsy who finished his PhD in Computer Science from JNU. Economically speaking, he would not have fallen into the poorest of JNU’s students, 40 per cent of whom come from families with their monthly income less than `12,000 per month, as per JNU’s annual report of 2017-18.

His father runs a wedding card business in Jaunpur, UP, and earns around `3 lakh per annum. Yet, he felt marginalised due to his ailment. “JNU is not just what it is because of its fee structure and admission policy, but also because of its infrastructure and support system. In any other university, I would have not been able to finish my PhD. The university needs government funds so it can expand infrastructurally and give people with disabilities a more equitable education. Raising the fee is not right,” the alumnus says.
WOMEN STUDENTS

Universities such as JNU have not only given the less privileged a chance at higher education, but also given women students – who constitute 51 per cent of the student population in JNU – a sense of identity and more exposure than they would normally have.
As a student at Sarvodaya Kanya Vidyalaya in Mehrauli, Shivani Yadav, 21, had many friends. Yet, she would be reluctant to invite them home. Her father, who is physically disabled, works part-time in a medicine factory, and her mother is a homemaker. She has two sisters.
“We all used to stay in a rented one room apartment in Kishangarh. Now my elder sister has moved to Udaipur where she’s working as a sales executive in a hotel, but everyone else stays there. Outside there’s a toilet, but there’s no bathroom as such,” she says. Yadav remembers feeling ashamed when she took her friends home. “Some of them made snide remarks and they stayed with me,” she says.
From now to then, a lot has changed for Yadav. With the help of an NGO, she was able to learn English and speaks fluently, but more importantly, she got herself enrolled at JNU. “In 2016, a teacher from an NGO called Samarpan Foundation, suggested to me that I should apply for JNU, so I gave the exam and cleared it. Since my domicile address is that of Sultanpur, UP, I also applied and got a hostel, because it’s not possible to study at home,” she says.
Currently, a final year student of BA Chinese, Yadav hopes to work as a translator. “My father earns between 5,000-6,000 per month, but it varies. My sister also sends5,000 a month home. Since my younger sister is completing her BA from DU, they have to spend on her education too,” she says. She gets 2,000 per month from home, and depends on her2,000 per month MCM scholarship for paying the hostel mess bill. “This month also I couldn’t pay because I didn’t get my MCM scholarship, so I had to borrow and pay the bill which was `4,600 for two months,” says Yadav.

Manisha Arya wasn’t always sure she would make it to a college. But in June last year, Arya left the cool climes of her hometown Ranikhet in Uttarakhand and made the 400 km journey to Delhi in the hope of getting admission to Delhi University — joining a group of over two lakh applicants, a large section of them from outside the Capital, who queue up outside its over 90 colleges in the sweltering heat every year, with big scores and even bigger dreams.
The 19-year-old had first heard about the University from seniors at her boarding school in Dehradun — Him Jyoti School — where she had been sponsored to study by a trust. But it was only after she secured 93 per cent marks in Class XII, and when her domestic help mother’s employer encouraged her to look beyond Uttarakhand, that she firmed her resolve “to step out of my comfort zone.”
Her father, a driver, came with her to Delhi, but didn’t accompany her to colleges. “Together, my parents make less than 1 lakh a year, and DU was my only hope. I had missed the application dates for Jawaharlal Nehru University and I could not afford the high fees of private colleges,” says the eldest of three siblings. In her early years, Arya’s reality and dreams seldom crossed paths. After studying at a private school in Ranikhet till Class III, she was pulled out by her parents because of lack of funds. It was the first time that the crumbling primary school education system of the country was laid bare before her. “I was put in a Hindi medium government school. The teachers didn’t come, there were hardly any classes,” says Arya, who joined the school in Dehra Dun afterwards. Years later, in 2018, as she walked around Indraprastha College for Women in Delhi, after securing admission to its Geography (Hons) programme, another sponsorship would take her a step closer to her dreams of becoming a professor. “The fee for my course was15,000 per annum and my family said they could manage that. But the hostel fee was 75,000 per semester — completely out of my budget. Even sharing a flat would have cost me5,000 per month, which my family couldn’t spare. So, I approached the principal of the college, who waived off my tuition and accommodation fee. It was such a relief,” she says.

For Arya, and thousands of other underprivileged students like her, institutions such as DU offer the rare combination of credible education at a nominal fee. At a time when scores of private institutions have cropped up across the country, where the fee per semester starts at a minimum of 1 lakh, DU’s Honours courses are offered at a fee between15,000 and 25,000 per year. While the hostel fee starts at5,500, each of its 20 hostels have a different fee depending on the facilities available.
Arya now wants to apply to JNU because she says she can’t afford a private college. Her options have now pared down to a master’s degree in JNU or a return ticket home, which is why JNU’s proposed fee is a matter of concern to students like her.
Early this month, JNU had announced a revision to the Inter Hall Association (IHA) manual. This will mean levying service and utility charges from students, apart from increasing their room rent. The proposal saw the campus erupt with protest. As per the original hike, students would have had to pay upwards of 7,000 per month, which included around1,700 per month in service charges, utility charges as per actual, mess bill which costs around 2,500 a month,600 per month if it was single seater and 300 if it was a double seater, along with paying Rs1,100 per semester as establishment charges and12,000 as refundable security deposit.
For Below Poverty Line (BPL) students, the fee was reduced by 50 per cent. However, the university has been unclear on how it will define and identify BPL students, with experts claiming there’s no standard line that exists across the country now.
With protests raging on for a month, the administration was forced to make two revisions to its original hike. The second came by way of a high-level committee appointed by the university, which suggested a 50 per cent reduction in fee for all students, and 75 per cent for BPL students. This has, however, been rejected by both the students’ union and the teachers’ association who say they want nothing less than a complete rollback.
For students like Tiwari, a hike is unimaginable. “There’s no way I will be able to afford it. For people like me there will be only two options — either beg at railway stations or commit suicide,” he says.