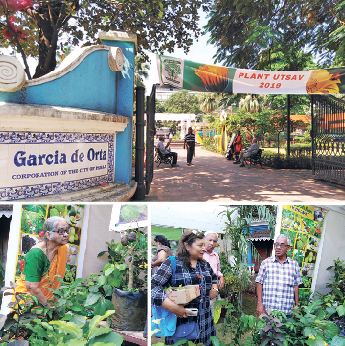 Glimpses of BSG’s Plant Utsav, 2019, at Jardin Garcia de Orta: That’s horticulturist and bonsai master Daniel D’souza doing a demo of flower arrangement (insets) the finished arrangement, alongside is a casuarina bonsai exhibit; a senior citizen takes a closer look at an ambade plant at a nursery collection, and nearby Jennifer Lewis Kamat chatting with Caje Almeida; elsewhere visitors taking a look at prizewinning maiden’s hair fern and (below) a tantalizing tableau of plants strung up at Shree Agriculture Nursery stall….and, ‘I am a fat green pod and very nutritious to eat! Say hello to me!” (in children’s competition for dressing up as flower, fruit or flower).

FEW things I love to do more than to time pass in gardens or plant shows to de-stress! So naturally I wait for any of the Botanical Society of Goa’s plant shows. I’m come to the conclusion that the historical Jardin de Garcia de Orta in Panaji is the perfect place to have plant shows in town and really there should be an organic market here too every weekend mornings or evenings…and plants for sale, classes teaching you how to grow your own kitchen garden, garden items for sale, etc. The Jardin de Garcia de Orta is a historical garden.
It is here that the Botanical Society of Goa had its annual show-cum-competitions this year from November 15 to 17, 2019. I went on all three days to fill my eyes with the wonder of plants at the various nursery stalls and even bought myself a potted jade plant, for some reasons I think jade plant will bring me luck! The Chinese in Malaysia think jade is a luck-bringer, more so the stone jade from Burma and China.
This time the Plant Utsav had a veritable line-up of BSG chairperson Daniel d’souza’s bonsai collection. It was a treat to look at all the miniature trees especially the floral ones and the venerated banyan with its aged wood, bonsai trees can look incredibly ancient and some of them are indeed 20, 30, 40 and plus, plus years old. It’s no wonder the Japanese have a thing for the painstaking art of creating bonsai and some rich and beautiful I know have veritable bonsai gardens on display in their grand homes…though I must find out who has the largest collection.
Ha, ha, Daniel of course although I haven’t been to his home. He is the pioneer in Goa for creating awareness of the ancient art of bonsai and has had some major exhibition sales, if you want to buy a bonsai go look at his collection – he won’t part with some of them for money or love, but he conducts classes and I’m sure learning the art of creating miniature plants or trees can teach one all the lessons of patience one may wish to learn. I often asked Daniel if reducing trees into miniatures is not a cruel art form and he said not at all, he loves all his bonsai creations and showers lots of love on them!
A hands-on person in one of the sessions at this year’s BSI’s Plant Utsav he demonstrated how to do a classical floral arrangement and it was an experience. There is a lot to balancing in doing a floral or flower arrangement to grace your living room! While working on turning out an elegant flower arrangement around a piece of driftwood (a dark beauty all in itself), red and white carnations, red orchids and large leafs…he shared valuable basics, hints, secrets. It was an enthralling lesson, thank-you.
Of the competitions I particularly loved the children dressing up vegetables or fruit. I’d have given a prize to the boy who flaunted himself as a bursting green pea pod! Well, there was lots to take pleasure in and I chatted with Angela who had eco-friendly household cleaning products, my favorite nursery owner Cage Almeida all the way from down south Goa Raia – buy soursop and ambade plants from him!
A lot of garden lovers are acquiring a passion for begonia of which there’re several varieties, begonia leaves are veritable showpieces or live paintings – quite a collection of begonia collection this time to beguile the eyes, I’m thinking of one exquisite curly-leafed begonia with its dark under leaf magenta coloring turning upwards here and there…like a flouncing skirt, very pretty. Meghnath Kerekar’s Shree Agriculture Nursery from where I bought my jade plant really had the most desirable collection of nursery plants for sale….expensive too, I don’t know why I had to shell out Rs200 for my jade! Everyone was crowding up here to see the African violets, roses and cacti and succulant beauties.