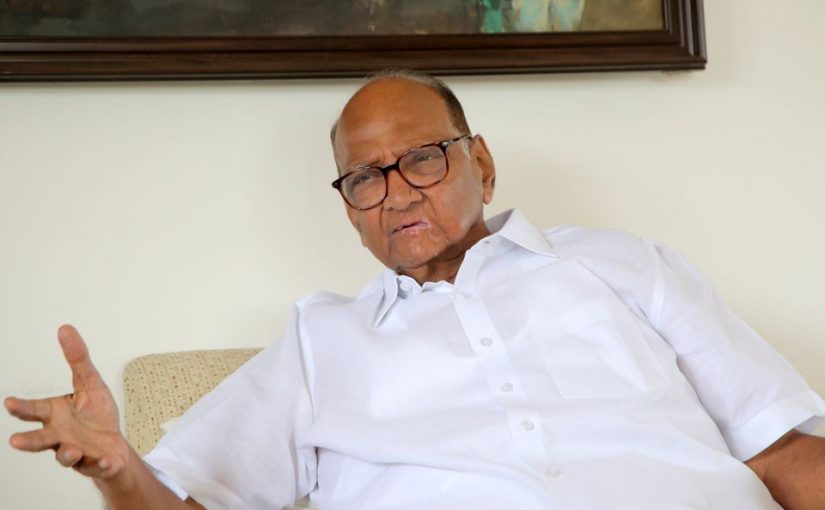 OUTWITTED: The veteran Chankaya Sharad Pawar dramatized that the BJP can be beaten in its own games by forming a three party alliance government in Maharashtra. He even got his ambitious nephew Ajit Pawar who had joined the BJP back into the family

Admittedly there are lot of people including the poor who have lost trust in the Modi government. As it has been dramatized in Maharashtra and other states the voter is desperate for an alternative. It is the duty of political parties to come together to provide the alternative as Sharad Pawar has done in Maharashtra. Taking Sanyas like Rahul Gandhi is not the answer

A speech in the rain, a night of long knives, unlikely friends and heartbreak hotels. In every episode of the drama that led up to the Maha Vikas Aghadi government, on every step outmanoeuvring the BJP, behind every stitch sewing up the Sena-NCP-Cong alliance, lay the calm hand and calculating head of Sharad Pawar. The Indian Express interviews the NCP chief on the art of making friends, his role, the Maharashtra alliance and what it means for the country.
With coalitions, the question often asked is how long will the arrangement last, especially when the parties have different ideologies. How long will the Maha Vikas Aghadi last?
On many occasions, parties that fought elections against each other, if there is no clarity about the majority after the results, to give stability to the state, they come together. Maybe their ideologies are different, but they can decide on a common minimum programme and, on the basis of that, form the government. Going for polls again is very expensive… Not just in India, in Europe, in Germany, for years together, coalition governments are running. So the idea that different parties cannot work together is not correct.
In 1999, there was no clear-cut majority for any party, but Mr (Atal Bihari) Vajpayee came forward… In his government, there was George Fernandes, Mamata Banerjee, they were all different… He took a decision to keep some of the BJP’s views and programmes aside. Ram Janmabhoomi, he decided not to touch that subject. Mr Vajpayee successfully ran the administration for five years.
In Maharashtra, the Congress and NCP fought against each other but now they are working together. For 15 years, they have provided stability to the state, they have a common minimum programme.
In the NCP, Shiv Sena, Congress alliance, there was compromise on the word ‘secularism’ in the common minimum programme. How was the Sena persuaded to accept that word?
When a situation comes when there is no choice but to work together, somebody has to make compromises. Compromise was not from the Sena side only, it was from the NCP and Congress side too. The Congress insisted on secularism and ultimately the Sena accepted it. Why? Because of these four sentences (opening a copy of the Constitution to the Preamble page)… Any government will obviously respect the Constitution. And they said yes, they respect the Constitution, and will form the government on the basis of the Constitution. Other than the Constitution, why ask for something? Why unnecessarily create misunderstandings in their rank and file?
Initially we thought the government should be led by both parties, two-and-a-half years each. But the Sena insisted on five years. So we said alright, you run. The compromise from our side was this.
You saw the Sena during the 1993 Mumbai riots (when its leaders were accused of instigating violence and Pawar was the CM). How difficult was it for you to join hands with it?
When you run a coalition government… one has to forget other things. In fact, when we work together, it is a sort of guarantee to various sections that nothing will happen. When parties with different stands on certain issues come together… and give confidence to the public at large that we are ready to work together in the larger interest of society, that sends a signal to various cross-sections of society – that it is a good thing. It’s happened previously also. In 1978, I ran a coalition government — I was a Congressman — there was the Janata Party, it consisted of the Jan Sangh and Samyukta Socialist party, there was support from Leftist parties, Peasants and Workers Party, and Republican Party of India.
Do you see a Hinduisation of India?
No, no, I don’t agree we are living in a Hindu Rashtra. We respect each other’s religions, it’s a personal matter. I have full faith on Hinduism, I do go to the mandir. But in public life, I belong to all.