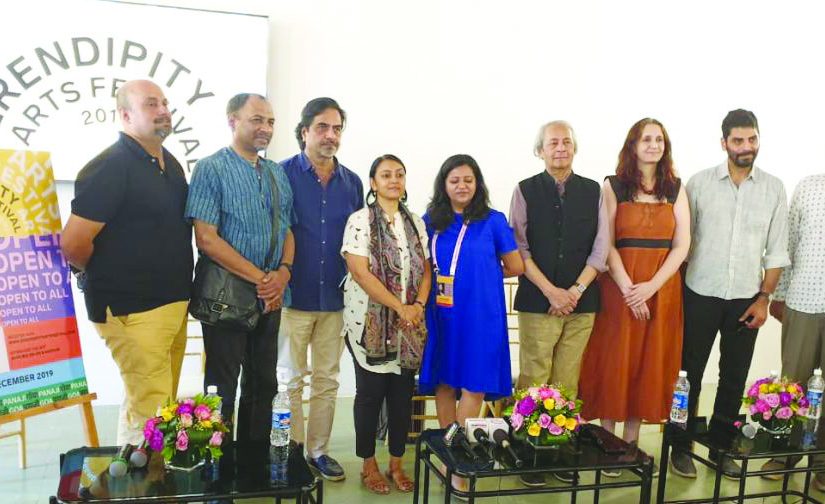 SERENDIPITY ARTS FESTIVAL kicks off in Panaji on December 15: SAF Director Smriti Rajgarhia (centre in pic) introduced some of the panalists/curators at a press briefing. Curators present here are Sudarshan Shetty, Rahaab Allana, Ravi Agarwal, Sneha Khanwalkar, Leela Samson, Dr Jyotindra Jain, Prahlad Sukhtankar, Vivek Menezes of Goa and others. Over eight days from Dec15 the festival offers a mindboggling 100 installations across several heritage venues dotting Panaji’s Campal Promenade. It’s a bonanza of visual arts, musicals, photography shows and exhibits, theatre, culinary workshops… and something more in between, not to be missed of course!

GOA’s winter season (can’t feel it this year) is one long round of ushering in one festival after another as the year draws to a close with Christmas and New Year. Arguably the Serendipity Arts Festival is the best organized of them all and the fourth edition is here, all set to open on December 15 and be around till December 22, 2019. Serendipity comes to Goa from capital city Delhi and this year’s it’s the fourth edition, promising to be as SAF director, Smriti Rajgarhia, said while addressing media people, to be the biggest, best ever since 2015 when the first one came to town in Panaji.
Panaji is still the favored place in Goa. Having learned from experience in the last three editions, the forthcoming Ms Smriti Rajgarhia, told media persons at a press conference that this year’s festival has also taken into consideration such things as not causing traffic jams down Panaji’s main thoroughfare, Campal Promenade, and it also seeks to be eco-friendly! She added that the festival’s main idea is to bring the country’s arts together on one platform, and quipped and that after all, “If you don’t know your culture, you don’t know your roots.”
The festival is all set to roll tomorrow (Sunday, December 15) to showcase about 100 projects put together by 14 curators at 12 venues — beginning with the historical, heritage buildings of the Old Goa Medical College (later Goa Institute for Management for many years and partially housing the CBI offices presently) to the Adil Shah Palace, Old PWD complex, Institute Menezes Braganza, and elsewhere along a 9-km stretch in Panaji.
It says much for the organizer’s sensibility that one of the aims is to clean, restore as much as possible, and give new life to heritage premises by using them for larger causes like educating ourselves about the importance of keeping alive and staying in touch with our traditional cultures and skills of crafts communities.
From the sound of it Serendipity may well blow away many lovers of the good life of fine arts. Call it a banquet offering of music, visual arts, dance performances, culinary arts, theatre, photography, crafts and much more to feed and inspire the visual and intellectual senses of everyone who makes time for it. Curators present at the press conference included familiar names like Sudarshan Shetty (visual arts), Rahaab Allana and Ravi Agarwal (photography), as also Dr Jyotindra Jain, Aneesh Pradhan and Sneha Khanwalkar, Atul Kumar and Arundhati Nag, Leela Samson and Mayuri Upadhya, Rahul Akerkar and Prahlad Sukhtankar.

Not to leave Goa behind there’s Vivek Menezes, special projects curator who has put together Mundo Goa – which explores and celebrates the Goan diaspora which contributes to Goa’s life and times considerably. Mundo Goa artistes featured are Amruta Patil, Antonio E Costa, Aruna D’Souza, Anjali Arondekar, Brendan Fernandes, Solomon Souza and Sergio Santimano.
All this and much more to look forward to. As someone put it – the articulate Rahaab Allana – Serendipity is all about stretching horizons, “eating life” so that we may survive and come to a point of convergence with the best references…presumably to arrive at a happier world view.
So make time to visit and enjoy at least some of the meticulously put together Serendipity Arts Festival installations and events…you’ll be amazed how much there is to live for in a world which many perceive is going bonkers, obsessed as it by frivolous, non-essential, obsolete values, or so to speak. At Serendipity one may well find or re-find some evergreen values to cheer up about.
Needless to say SAF is recognized as one of the largest multi-disciplinary art initiatives in the South Asian region offering “institutional partnerships with artists and art organizations, educational initiatives, grants and outreach programs across India.” In Goa festival collaborators include Swayam Chaudhury (managing director & CEO of Imagine Panaji Smart City Development Ltd), industrialist and philanthropist Shrinivas Dempo and others with co-presenters this year being Havell’s and HDFC ERGO & GMR as per press release.