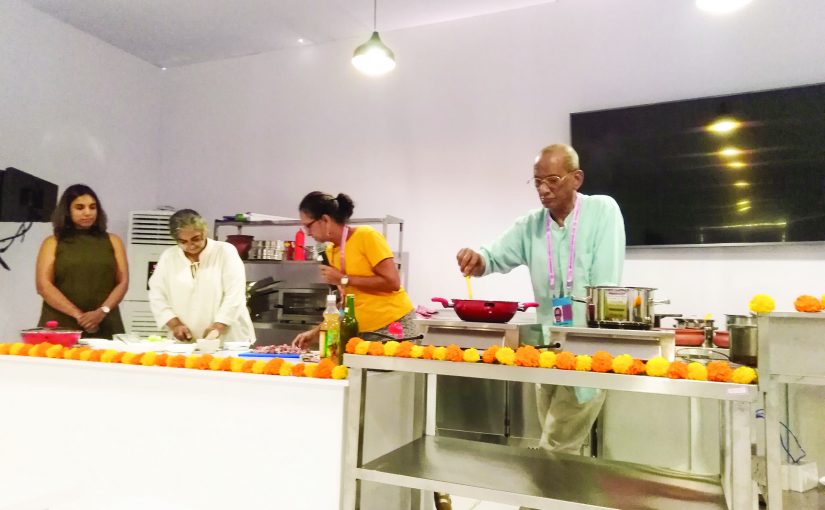 Serendipity Chef’s Legacy workshop on East Indian cuisine…. iconic Chef James Ferreira does the honours, “In my family men cook best!” Interestingly, James is a one of the country’s pioneering fashion designers

DON’T ask me how I did it but I did it after plus, plus years of life on earth! I ate or rather tasted my first sorpotel – East Indian cuisine-style pork dish which is much loved also by Goans, although they do it in a different way, it’s less spicy and the East Indians of Mumbai-that-was-Bombay consider it more of a side-dish pickle to go with their main meal of other delights. Delights like Lonvas (prawn curry with large chunks of pumpkin or dudhi in it) to be savored with rice or breads like Fugia and Chitiapp…and all this was at the Chef’s Legacy culinary workshop at the ongoing 8-day Serendipity Arts Festival at the INOX complex on December 15, 2019.
The real treat was in meeting the sweet James Ferreira (fashion designer but also cook extraordinary who hails from the famous enclave of East Indian residents at Khotachiwadi in Bandra (West) in Bombay. James and his extremely efficient cousin Glenda Fernandez demonstrated the exclusively East Indian cuisine dishes with exquisite, chatty, informal presentation…if you must know the East Indians are the original residents of Bombay, the history is when the early Portuguese and British men of the British East Indian Company came they married and integrated with the native coastal Marathi-speaking people and thus there was a conversion to the Roman Catholic faith. They were the early employees of the British East Indian Company but did not of course depart when the pucca English left post-colonial rule.
The Indian East Indians are Marathi-speaking and their cuisine is a mix of Maharashtrian and European influences; please, don’t confuse East Indians with Goans although they have some common traditions. A love for pork dishes and in particularly sorpotel and seafood but the East Indian cuisine is less spicy and revolved around the now famous “Bottle Masala” which every family made secretly or so to speak. James showed off his family’s bottle masala saying his family’s blend was of 23 spicy items but it could also be 28 or more depending on secret family recipe! What could go into bottle masala is several kinds of red chillies hot and not so hot (Bedgi, Kashmiri, Madras, etc), cumin, coriander, black pepper, cloves, cinnamon, bay leaves, even Dagdaphool (stone flower which is a lichen), star anise, generally speaking whatever you liked…or so I read up later, some would add the much loved Goan Tirphall, also a few strands of saffron and more.
Anyway, all whole masala items are sun-dried out before slow roasting over gentle fire till they release their aroma…final grinding to masala powder on a traditional stone mortar-pestle, and the art in keeping it good for a year lies in the tight bottling with the help of a masala stick. The masala was once packed in what were empty liquor bottles (hence “bottle masala”)!

The secret to East Indian cooking is really in this bottle masala and I wished I’d asked for some of it later…but forgot. James was quite cordial and invited everybody to visit him in Kotachawadi if they wanted some bottle masala! Amidst all the cooking going on he filled us in with some fascinating family history. His family traces its roots to the last Portuguese ambassador of Bombay, he married into the Damodar family of Pune in the early 1600s.
After that it was one happy story down the generations and years and closer to the present he grew up in a family of five brothers, three sisters and “my brothers were amazing cooks.” The sisters never had to cook!
Speaking for himself, “I like to cook my sorpotel well, but we cut the pork to fine cubes…cook it over slow fire for 45 minutes. Earlier a lot of oil was used of course to keep the sorpotel good for some days, there was no fridge in the old days…the ratio of meat could be 70 percent meat, 30 percent fat. For us sorpotel is more like a side dish, sort of pickle and we don’t use onions!”
While the sorpotel and lonvas simmered; we all watched intrigued by the making of the fugiya…Glenda had mixed the batter and squeezed out little balls between her thumb and forefinger over the hot oil….the fugiya puffed up lightly gold and rosy and were removed with a slotted spoon. Passed around in a tray for all to taste. Something delicious (“if one got tadgola palm toddy one would use it to ferment the batter in the old day, but nowadays it’s usually yeast dry or wet”). Also, added James Ferreira, “In my family my mother believed the more you give, the more you get!” It is a good philosophy to live by.
Also, another secret to cooking in the old days was to cook in mud vessels, which they still do to this day in their family, “If you get a new mud vessel, cook a rice kanji in it first and the vessel will never crack!” All this and much more and afterwards I was astonished to find myself tasting the sorpotel, lonvas…loving the light hearted tangy prawn curry more, laced it in my rice (which was also put out so that could get to eat a proper lunch). The roly poly fugiya were a treat with everyone just biting into them…oh, I forget the chitiappa, thin rice pancakes. These too qualify as one of the East Indian cuisine breads and they disappeared first.
In the old days, sighed James Ferreira, their Sunday lunch would invariably be “sorpotel, lonvas (which is really like the Burmese khau sway…anybody brought anything it would be dropped into it”), eggs, fugiya or bread rolls perhaps, coffee…after that there was a card game session and the Bandra fair!” From the sound of it those were really the good old days when families met up and caught up with family feelings of love and affection in togetherness. (Sigh) There is much to be said for the companionship of the large families of old in our country, in comparison our so called nuclear families of today are cold, sterile and sometimes deadly, no? But these are my thoughts.
For an inaugural session this one went off very well with lots of bonhomie and most everyone feeling warm and contented afterwards…as they chatted some more with James or Glenda or Althea (mother) and exchanged addresses, before slowly moving out of the Serendipity tent where all the culinary sessions are taking place.
Sorry, I couldn’t make it to all the sessions, there were a few more this year for who’s not interested in food old or new or fancy! Yes, I think I really take to East Indian cuisine much more than Goan cuisine…for some reason I find Goan cuisine getting spicier and spicier, why?

SOME RECIPES TO DO

METHOD:
If using fresh shrimps or prawns marinate with little salt and place aside for ten minutes. If using dry shrimps sauté them in little oil for 2-3 mins on low heat.

Take a vessel, add oil, once oil is hot add in chopped onion. Fry till translucently light gold. Add in curry leaves, saute for 30 secs. Now add chopped garlic, ginger. Saute till raw smell disappears. Add required amount of bottle masala. Add little water and saute for 2-3 mins.
Add drumsticks, fresh or fried dry shrimps, salt and little water.
Cover and cook for 7-8 mins or until drumsticks are cooked and tender.
Now add thick coconut milk and cook on low heat for 2 mins. Don’t cook on high heat or milk may curdle. Finally mix in tamarind pulp and cook until bubbles appear. Check for taste, add whatever you think you need more of and serve lonvas curry with hot rice or one of the East Indian breads.
(Note: East Indian speciality bottle masala is wonderfully aromatic and can be as spicy as garam masala, so be cautious. These days one may order bottle masala online but if you can’t find it pinches of garam masala powder, red chili powder, turmeric, pepper powder and coriander seed powder will do as second best. Once you add coconut milk turn to simmer or low heat for 2-3 mins, beware curdling. Tamarind paste must be added last. Onion, garlic and curry leaves are optional. East Indians are fonder of garlic than onions. Instead of tamarind, kokum or dry mango or dry mango peel may be used for that certain sour wee tang of a real lonvas.)

METHOD:
Add 1 cup of warm water to 1.5 tsp of yeast, feed it with a pinch of sugar and set aside for 15–30 mins till it froths.
Add 2 cups of regular all purpose flour and 1/2 cup sifted whole wheat flour. Mix all the liquid ingredients together – one beaten egg, yeast mix, 200 ml coconut milk. Add flour a tbs at a time and sugar too. Be sure to scrape the bowl in between and once batter is thoroughly mixed. Mix in pinch of sea or pink rock salt. If your dough mixture looks a bit dry, add a little more milk. Leave it in a warm place to rise for 1 hour.
Prepare your equipment before you start – risen batter, a large bowl of water, big enough to dip your fingers in, a tray with layers of kitchen towel, a hand towel and a slotted spoon
If you’re right handed, make sure to wet your fingers on your right hand and vice versa if you’re left handed. Scoop up dough, release with wet fingers in dollops into the hot oil ready for deep frying. Keep wetting your fingers, if they get dry, the dough ball will stretch when you try to release it between thumb and forefinger. Drop enough dollops or balls in the oil so they fry equally. When light creamy gold or pink remove fugiya balls with slotted spoon on kitchen tissue to absorb excess oil. But in a pretty appropriate container and serve hot with sorpotel or whatever curry you wish.