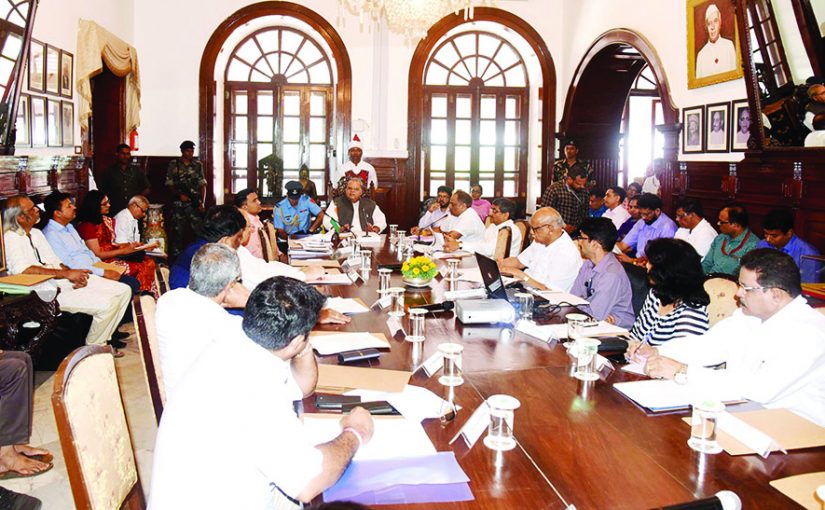 That Goa and Goans have been fooled on the very crucial Mhadei issue comes as no surprise. The expected politrick has dawned. In this political chicanery for the BJP’s interests in Karnataka has overridden Goa’s welfare.
It is absolutely shameful at the manner in which Union Environment Minister Prakash Javadekar has deviously and crookedly the people of Goa.
Let our unyielding resolve be to make sure that the battle for our Mhadei is a do or die. We need to ensure that every precious drop is saved for the wellbeing of Goans. Posterity will never forgive us if we don’t combat this so vital Mhadei battle and allow our lifeline to dry up and our ecology destroyed.
The buck stops at the door of Goa’s accidental Chief Minister Pramod Sawant who has miserably failed on all fronts including the Mhadei. He had publicly declared that he would join the public agitation if the Central government went back on its word. Mr CM it is now time to walk your talk.
— Aires Rodrigues, Ribandar
GODINHO’S DEAF EARS!
WE at the Goenchea Ramponkaranchea Ekvott are shocked and disappointed with senior most Minister of Panchayat Mauvin Godinho and four times former MLA of Cortalim for supporting doubling of the railway track from Hospet to Vasco. It looks like the MLA is pretending to turn deaf ears even after knowing the fact that doubling of track will completely effect the people of Cansaulim, Arossim, Velsao,Pale and Issorsim, who already given their land for free at the time of Portuguese regime in 1878 to construct metre gauge railway for connectivity of the port at Mormugao Port Trust (MPT), Vasco to Sanvordem. At the time the track was only built to transport passengers to the port at harbor station for employees to work at MPT, there was no fast mode of transportation for employees. Today there is essential cargo like coal, iron ore, naptha, ammonium or phosphorus, petroleum, pig iron, etc, being transported.
GRE draws the minister’s attention to the fact that MPT port is a private port handled by Adani Ports & SEZ Ltd, Jindal South West Port Ltd and Vedanta, as Central government gave autonomy in 2016 to the port by replacing the Major Port Trust Act, 1963. It allowed them to lease out the remaining water spread area of 76,850 acres and land area of 533.48 acres to anyone they wish.
If the minister had been vigilant enough and if he had attended the public hearing at Tilak Maidan held in March, 2017, for MPT’s three major port expansion plan he would have clearly known why the double railway line is required from Hospet to Vasco, as per draft Environmental Impact Assessment prepared by Mormugao Port Trust. It clearly mentions the second railway line is required for transportation of coal to steel plants at Bellary and for new plant which ought to be set up in the vicinity, and due to this MPT plans to increase the berth handling capacity, so that it can enhance coal handling from 12 to 50 million tons per annum.
Due to haphazard coal handling pollution has and is taking a toll of people’s health with 4,500 cases of respiratory disorders including asthma, tuberculosis, etc, being registered, and if you include private clinics operating in Mormugao taluka the toll goes to 25,000 people. As GRE vice-president along with ex-Panch of Velsao, Custodio Camilo Souza, request minister to be more sensitive towards electorate rather than political or corporate masters — as the land owners of Cansaulim, Arossim, Velsao, Pale and Isorsim have not rejected the procurement of their land and also the Velsao, Pale, Issorsim and Cansaulim-Arossim-Cuelim has passed resolution against doubling of track. The coal train which passes through villages transports per minute 23 tons which is 3,800 tons coal per train, nine such trains carrying coal pass through our villages.
It has created devastation to people, villages – if double railway track comes to our village there will be more further destruction of ancestral homes, properties of coconut plantations, farmers, and others engaged in their livelihood. Yield crops has fallen because of coal dust pollution and adversely affected life of those living along the track.
We appeal to government and Chief Minister Dr Pramod Sawant to follow in the footsteps of late Manohar Parrikar, as he made repeated statements and promised the people that no doubling of track will come to our villages. We are very confident that Minister Mauvin Godinho will support us from being destroyed and will not enforce criminal acquisition of our villages as this will be in violation of Article 21 of the Indian Constitution.
— Olencio Simoes (general secretary of GRE AGFU and vice-chairpersonof National Fish Workers Forum) & Custodia Camilo Souza (vice-president)

SUNBURN DRAMA
Why is it Mr Chief Minister of Goa that your government cannot decide when it comes to Sunburn and matter are taken to High Court every year? Who is not aware that like casinos Sunburn organizers too do not take a No from you and your government and the event ultimately takes place after much suspense drama preceding it. But now that permission is granted anew at least have sound decibel monitored and traffic inconvenience to locals minimized. Also check how and where visitors answer nature’s call. BJP is following the Congress path of converting Goa into a den of vices!
— Uma Volvoikar, AAP women’s Cell leader, Goa