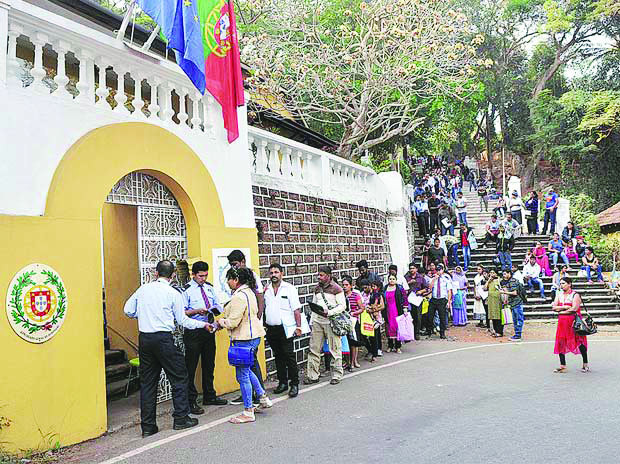 iN THE event of a countrywide NRC, “for pre-1971 genealogy, you do not have to submit any type of identity card or any documents like the birth certificate of parents/ ancestors.
Former Rajasthan CM Vasundhara Raje at a rally organised by the state BJP in support of the new citizenship law in Jaipur on Friday. (Express Photo: Rohit Jain Paras)
Seeking to quell the ongoing protests against the amended citizenship law, the government on Friday clarified that anyone born in India before 1987 or whose parents were born in India before 1987, are bona fide Indian citizens according to law and don’t need to worry about the Citizenship (Amendment) Act, 2019, or the proposed pan-India NRC.

Additionally, the government clarified that in the event of a countrywide NRC, “for pre-1971 genealogy, you do not have to submit any type of identity card or any documents like the birth certificate of parents/ ancestors. It was valid only for the Assam NRC, based on the ‘Assam Accord’ and the directive of the Honourable Supreme Court. For the rest of the country, the NRC process is completely different and under The Citizenship (Registration of Citizens and Issue of National Identity Cards) Rules, 2003.”
It said “there is absolutely no compulsion to submit any document by/ of the parents”, and “it would be sufficient for you to provide the details of your birth”. However, “if you do not have the details of your birth, then you will have to provide the same details about your parents”.
A top government official said that according to the 2004 amendments of the Citizenship Act, if one parent is an Indian and neither is an illegal immigrant, a person is considered an Indian citizen. However, this does not apply to Assam.

DOCUMENTS UNDECIDED
“
The government is also open to receiving suggestions, if any, from anyone on the CAA,” he said, adding, “We are also trying to remove doubts of the people about the CAA through various ways.”
In a note issued by the Press Information Bureau (PIB) titled ‘Q&A on NRC’, the government said: “Citizenship can be proved by submitting any documents related to date of birth and place of birth. However, a decision is yet to be taken on such acceptable documents. This is likely to include voter cards, passports, Aadhaar, licences, insurance papers, birth certificates, school leaving certificates, documents relating to land or home or other similar documents issued by government officials.”
It said “the list is likely to include more documents so that no Indian citizen has to suffer unnecessarily”.

The home ministry spokesperson also tweeted on Friday: “Citizenship of India may be proved by giving any document relating to date of birth or place of birth or both. Such a list is likely to include a lot of common documents to ensure that no Indian citizen is unduly harassed or put to inconvenience.”
The spokesperson also tweeted, “Indian citizens do not have to prove any ancestry by presenting documents like identity cards, birth certificates etc of parents/ grandparents dating back to pre-1971 situation.”
On whether the NRC would require old documents that are difficult to collect, the PIB note said: “There is nothing like that. Common documents will only be required to prove identity. When the NRC is announced at the national level, then rules and instructions will be made for it in such a way that no one will face any trouble.”
It said that if a person is illiterate and does not have relevant documents, “the authorities will allow that person to bring a witness. Also, other evidence and community verification etc. will also be allowed.”

Saying that the assumption that poor people may not have any documents was “not entirely correct”, it said: “… they also got the benefit of the welfare schemes of the government. Their identity will be established on the basis of that.”
Emphasising that NRC has not been announced for the entire country, it said that if it is implemented it “does not mean that anyone will be asked for proof of being Indian.” “NRC is merely a normal process to register your name in the citizens’ register. Just like we present our identity cards or any other document for registering our names in the voter list or getting Aadhaar card made, similar documents shall need to be provided for NRC, as and when it is carried out,” it said.

On some chief ministers saying that they would not allow NRC or CAA to be implemented in their states, the top official said state governments don’t have the power to deny the exercise. As per the central government order, the power to grant citizenship is currently delegated to district magistrates. The official said the Centre may rescind that order to vest that power in the Foreigners Regional Registration Office (FRRO) under the Ministry of Home Affairs.