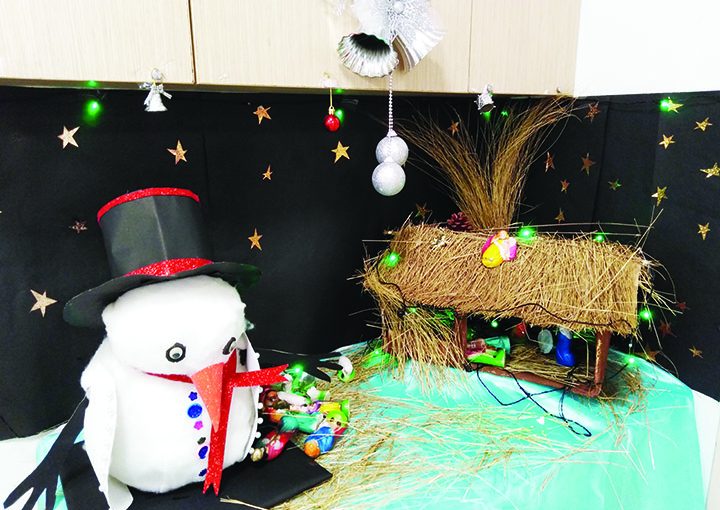 IT’S CHRISTMAS-NEW YEAR TIME AT MANIPAL HOSPITAL… patients who found themselves at Goa’s premier hospital in Panaji were cheered up by some of these glimpses of Bethlehem crib tableaux and pretty Christmas decorations creatively festooned everywhere up and down the ward corridors of the hospital. They probably got midnight wine and cake too to usher in ache din in 2020!

I WOULD like to bring to the notice of whatever authorities there be that the Sunburn EDM festival is a big loss for locals and visitors who get carried away and make the mistake of attending the festival for its musical charms. Amidst the melee of loud ear-deafening electronic music and wild dancing I somehow lost my expensive mobile phone, and later discovered that other tourists too found their hand phones missing.
I went to lodge a complaint at Anjuna Police Station about my robbed hand phone and police told me on the first day 250 mobile phones had registered as robbed at Sunburn; on second day 160 hand phones registered as lost; third day 100 hand phones were lost. A friend of mine saw two robbers who’d stolen mobile phones selling them on the beach for whatever sums they could get. Sunburn had a lost and found stall but it was useless.
In conclusion I would like to say that Sunburn and its thefts encourage criminal tendencies in perhaps migrant thriving in Goa and encouraging negative lifestyles. Goa is really become a den of corruption and criminal activities.
— Sailesh Shirodkar, Morjim
LESS GOVERNMENT!
WE need less government and better governance. A very small State like Goa does not need these Zilla Panchayats. The State could save the unnecessary expenditure that will be incurred on holding the ensuing Zilla elections. Since its inception the powerless Zilla Panchayats have been thirsting for power. This unnecessary idling extra layer should be scrapped and instead more powers should be vested with the Panchayats. And in fact our tiny Goa could be well-governed with just 30 MLAs and a Cabinet of five instead of the current 40 MLAs and a jumbo Cabinet which is only needlessly burdening tax-payers. It would come as a great relief to our currently financially bankrupt State exchequer.
— Aires Rodrigues, Ribandar

CANDY GOVERNMENT
THE PWD minister says that the villagers request for a flyover which would cost Rs400 crore, not affordable to the government. Projects like highways and railways always have a cost overrun due to unforeseen or careless planning. Till date Konkan Railways is facing rock falls and embankment washouts due to faulty planning. Had the planners visited Benaulim before the budget they would have included the flyover and there would not be a cost overrun.
Should Benaulim be penalized for government planning mistakes or poor planning? All highways have a provision for payments for escalation including that due to extended completion periods. Recently, Goa government was forced to pay out Rs395 crore to Reliance Power. How can they afford this? In this case it is purely a mistake of the government yet the money was paid.
Finally are all roads meant for the benefit of Central government’s favored businessmen and not for the general public? I think we have to go back to school for a refresher course in civics. We need a government which can stand up to the Centre and not just cave in. It seems everyone feels that fooling Goans is like taking candy from a kid.
— R Fernandes, Margao

FIGHT FOR MHADEI
AS former law minister of India and former deputy chief minister of Goa I appeal to all Gram Panchayats, all Municipal Councils and Zilla Parishads to convene emergency meetings of their respective committees, councils, ZPs and Gram Sabha and pass unanimous resolutions condemning the attitude of both government of Karnataka and government of India for their brazen attempts to ride roughshod over the interests of Goa in matters of Goa-bound river/rivulets, in particular river Mhadei and Karnataka’s attempts to divert its waters towards the Malaprabha basin. My proposed resolution to be discussed and passed at respective meetings should be as given here:
‘River Mhadei and its various tributaries flowing down the Western Ghats sustain the lives of Goans in every conceivable way. Mhadei is our lifeline, in fact our mother Ganga and we hereby vouch to fight for it till the end. This VP meeting/Council meeting/ZP meeting/Gram Sabha hereby announce their determination to fight for Mhadei and all rivers flowing into Goa and condemn the attempts of Karnataka government to divert the rivers. Likewise we condemn the partisan attitude of the government of India and call upon governments of both Karnataka and India to refrain from tramping upon the rights of Goans and to ensure the continuous flow of the river into Goa.
And we hereby call upon all Goans to stand united and fight for preservation, conservation and protection of River Mhadei and all rivers/rivulets flowing into Goa from the heights of the Western Ghats. And further we call upon the government of Goa to immediately take measures to augment the supply of free potable water through appropriate steps like contour bunding, construction of small and medium size bunds and bundhara over fresh water riverlets and also ensure free flow of fresh water to our rivers, khazans, ponds and backwaters which are affected by salinity brought in by tidal effects as they are dependent upon continuous flow of fresh water for maintaining the fragile ecosystems sustained and protected over millions of years by manmade infrastructure like dykes, bunds and sluice gates. Jai Mhadei, Jai Gomantak, Jai Hind.’
I also request concerned VPs, Municipalities and ZPs to record the proceedings and upload photos and videos on social media and share the same with government of India sites.
— Ramakant Khalap, Goa