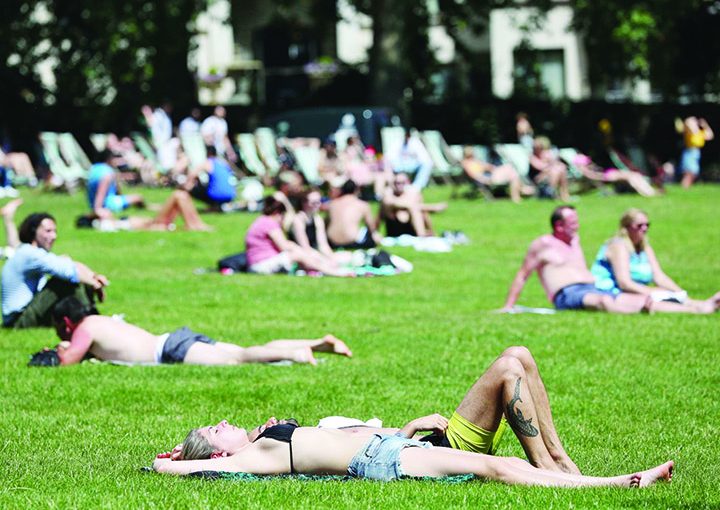 GLOBAL WARMING: There have been heat waves in London where normal temperature is never above 10 degree celsius. Time for a sunbath or sunburn!

On earth we have the equator, which is the hottest, the Tropic of Cancer and the Tropic of Capricorn which are tropical, and the Arctic and Antarctic circles which are the coldest places on earth. Now it is well known that hot gases are lighter in density and thus causes a low pressure area. Also cold areas because of the denseness of the atmosphere is a high pressure area.
The high degree of humidity leads to dew point having reached and there is large large scale precipitation in the form of rain.So we have a rain forest, an example of which is the Amazon.
Now enter the billowing of carbon dioxide, nitrogen oxides, sulfur dioxide, carbon monoxide and particulate matter due to the burning of fossil fuels. These gases when emitted into the atmosphere lead to a fair degree of change in the composition of the air from its natural composition and thus lead to changes in high pressure and low pressure areas depending on the density of each of the greenhouse gases emitted. Thus, we now have a situation wherein the entire wind direction as well as temperature pattern are modified in the atmosphere due to the integration of the greenhouse gases.
We may safely conclude that man-made activities such as the burning of fossil fuels –coal, petroleum coke, petrol and diesel in particular used in all industrial activities, such as coal-fired power plants, petroleum coke used in the steel and aluminium industries, cement production and other industrial activities.

High and low pressures and temperature modifications lead to totally different occurrences in the wind direction, in some cases also leading to spiraling vortexes in the atmosphere which tries to explain the incidence of hurricanes, wherein very high velocity winds and even rain are the direct effect of man-made climate change in the atmosphere. Assuming that there is no creation of gases in the atmosphere, other than the man-made emissions due to industrialization and vehicular traffic, it is sensible to note that burning of fossil fuels is leading to climate change due to the emission of greenhouse gases.
Gases in the atmosphere are definite in content and only gets modified by processes such as photosynthesis in which the green leaves of plants take in carbon dioxide and emit oxygen, thus replenishing the purity of the air, while greenhouse gases pollute the atmosphere. Except in areas where there are trees and no emission of greenhouse gases, we still have dew and fog, but the billowing of greenhouse gases mean that nearby areas where there is high industrial activity and vehicular traffic, the so called dew and fog is now to be known as smog, which contains high degrees of carbon dioxide, nitrogen oxides, sulfur dioxide, carbon monoxide and particulate matter, raising serious concerns about toxicity due to changes in air quality from normal air. This leads to respiratory diseases.
Also emission of greenhouse gases is leading to acid rain in which nitric acid, sulfuric acid and carbonic acid is leading to pollution of rain water due to leaching of the greenhouse gases, causing waters in our seas, oceans, rivers and other smaller water bodies such as lakes and ponds carry water which is not of natural content and detrimental to the earth. Eradication of the use of fossil fuels is the way to curb greenhouse gas emissions and to save our environment. But this is to be done in a step-by-step method, by replacing fossil fuels. Since production of steel, aluminium and cement in particular among others require as per our technology the use of petroleum coke and coking coal, it would then be prudent to curb greatly the use of coal in coal fired plants since there are other alternatives in the power sector such as solar power, wind turbine power as well as nuclear power plants, which though very risky will require to have solid supervisory and controlling skills to prevent accidents that may claim many lives and lead to radiation that could be very damaging.

Developing nuclear power plants that can be disabled when an early warning is given about the occurrence of an earthquake or a tsunami could make nuclear power very safe, by preventing radiation due to chain reaction of fuels such as uranium and thorium in the power plants.
Hydrogen fuel cell cars could also in the long run be developed so as to be able to make it affordable and practical. Here we have to draw from the almost complete abolition of chloro fluoro carbons (CFCs) used as refrigerants which has been phased out and led to the protection of the ozone layer in the atmosphere. Drawing from this example, usage of coal, petroleum coke, petrol, diesel and LNG can be definitely curtailed sizably if the world takes proactive action to reduce the use of fossil fuels so that the environment can be saved for future generations.
It is a big effort but one that will pay rich dividends towards curtailing green house gas emissions and thus also control climate change. Participation of the entire world in resorting to uses of renewable sources of energy can lead to a much greater salvation of the human race in which everyone is healthier. Governments must make a concerted effort in which no country is discriminated on the basis of phasing out greenhouse gas emissions. We know that China, US, European Union and India are the largest emitters of greenhouse gases, with China accounting for one fourth of the total greenhouse gas emissions and US responsible for a little over one-eighth of the total greenhouse gases.
A mutually acceptable climate change controlling regime has to be followed to curb greenhouse gas emissions worldwide. Global warming is a clear and present danger, lessons of which can be drawn from the very high and low temperatures witnessed all over the world.
Also there are huge apprehensions about the melting of Arctic and Antarctic ice caps which will definitely lead to the submergence of low lying areas steadily. The occurrence of several hurricanes all over the world is another cause for concern. Climate change is leading to migration patterns of people.
Global leaders have to agree to a prudent road map, wherein no country is made to share disproportionate burden in combating global warming and climate change. Once every country realizes that man-made activity is the cause of global warming and climate change, then we can individually and collectively work towards drastically curbing further global warming and stabilizing climate change which affects us all, big and small, rich and poor, human life and wildlife.