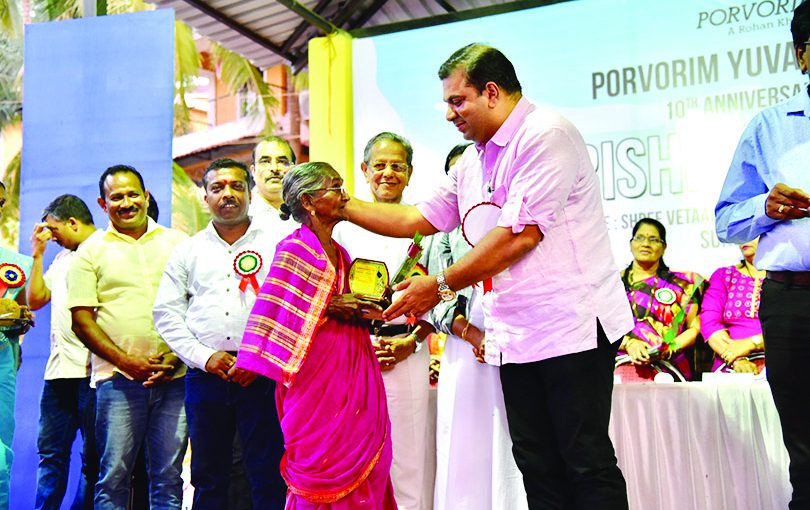 EVERYONE LOVES A KRISHI MELAVA!

DAY-LONG KRISHI MELAVA: The Porvorim Welfare Trust spearheaded by Porvorim MLA Rohan Khaunte recently organized a day-long Krishi Melava on Jan 12 at Carrem Vaddem in Porvorim. The day saw several sessions and talks by experts to benefit small farmers and 87 farmers were also felicitated. People from all walks of life visited visited the stalls set up to look at and buy the bounty of agricultural produce up for exhibition and sale. Pic shows MLA Rohan Khaunte felicitating a woman farmer. Panch member Sanjay Pednekar thanked Mr Khaunte for choosing Carrem Vaddem for the Krishni Melava and said projects amounting to over Rs15 crore were initiated and completed in their village thanks to “our MLA who has constantly tried to address all kinds of concerns of farmers.”

This is regarding the episode in Malwan (Maharashtra) where the use of LED fishing trawler belonging to St Andre MLA Francis Silveira was apprehended by the authorities. The tahsildar of Malwan imposed a fine of Rs3 lakh on Silveira. This act deserves to be appreciated since the tahsildar upheld the law of the land without being influenced by the fact that the trawler belonged to Mr Silveira. The tahsildar is the equivalent of mamlatdar in Goa. Goan mamlatdar should emulate the Malwan tahsildar. Barring some honorable exceptions I’ve seen many mamlatdar in Goa fearing to implement the law. Their inaction on the blatantly illegal sand mining across Goa is an example. It also appears that the mamlatdar often decide cases based on political influence. I urge Goan mamlatdar to take a cue from the Malwan tahsildar and act in an upright manner.
— Narayan C Prabhudessai, Aquem, Margao

unpunished crime
It is seven long years since the Vasco 7-year-old little girl was mercilessly raped in broad daylight in the toilet of Deep Vihar School run by the Mormugao Port Trust where she was studying in the second standard. While the little girl and her grief-stricken parents relentlessly looked for justice, the alleged rapist and his accomplice are still free birds possibly scouting for other catch.
After that gruesome rape on January 14, 2013, the police were informed three hours after the rape while the school staff high-handedly washed away all the evidence. The victim received medical attention only eight hours after she was brutally raped, she got counseling only 15 days later. The little girl’s family may have been very poor but justice should not have eluded them. Her family was not affluent or influential and that is why the authorities succeeded in a cover-up and deliberately botched investigation.
Despite this heinous crime against a 7-year-old, then Chief Minister Manohar Parrikar never ever cared to visit the victim and her grieving family. It was appalling that he dared show such insensitivity while the police methodically hushed up the case. Incidentally, on the day of the rape it was local Mormugao MLA Milind Naik’s birthday and the party in the very neighborhood of that ghastly crime went on, with even the decibels not lowered.
If only the victim was a daughter of a minister, a cash-loaded businessman or an affluent citizen, the case would have been cracked in a day or two if not hours. Indeed, sorrowing lies the State for want of law and order.
We are living in times where justice is no longer our right. It has become the privilege of the rich and well-connected. If we are made to believe that the police should be left alone and that law will take its own course, we are being led into fairy land. That is why we have courts to ensure that justice is done, but if courts also turn into monsters of injustice the end product is a lawless jungle, which sadly Goa already is. Let us continue to keep the little girl and her family in our thoughts. The authorities may have abandoned them, but we cannot.
— Aires Rodrigues, Ribandar

DOUBLE PARKING NUISANCE
SINCE the advent of high rise buildings in Panaji and the fact that almost everyone in Goa has 4-wheeler or 2-wheeler, double parking has become a nuisance of magnitude. Vehicles are parked on either side of even narrow roads or streets to cause inconvenience to motorists.
There is double parking by 4-wheelers and their owners leave tail light or emergency light on or the steering wheel in the hand of minors or women without driving license. Why don’t traffic police clamp these vehicles which cause congestion down roads and streets of Panaji?
Again, drivers of 4-wheelers happily double park and go shopping or to work or various errands while traffic comes to a halt around while negotiating a way. Traffic police should take strict action against those who violate double parking norms in public even if the parking is of short duration. Implement traffic rules strictly so that there is no congestion and inconvenience for smooth movement of traffic, please!
— Stephen Dias, Dona Paula, Panaji

JESUS STATUE
SOME right-wing organizations have given an ultimatum to the ruling BJP government in Karnataka to reverse its decision to allot land for the proposed 114-feet statue of Jesus Christ at Kapalabetta, Kanakapura taluka, which is in Ramanagara district. The State government has been given time till January 25 by the Sangh Parivar.
As part of the ongoing protests against the proposed Jesus statue, hundreds of members of the Hindu Jagarana Vedike, a religious front of RSS, took out a march and even passed a resolution. It urged the BJP government to stop the ongoing activities related to the statue at Kapalabetta, and demanded that cases be booked against officials responsible for allowing the construction, it also asked for strong anti-conversion law.
The proposed statue atop a 114-feet pedestal is coming up at Kapalibetta in Harobele village, a predominantly Christian locality in Kanakapura, the Assembly constituency of Congress leader Shivakumar in Karnataka. Shivakumar’s office earlier said that they are utilizing their own funds, the Congress leader purchased 10 acres at Kapalabetta from the government for the trust that is constructing the statue. The claim is it would be the tallest monolithic statue of Jesus in the world.
However, addressing the march, Kalladka Prabhakar Bhat, a right-wing leader, claimed the disputed land was purchased illegally, he also claimed that India is a land of Krishna and not Christ, due to this his supporters will not allow the statue. What does he mean? Haven’t European rulers allowed so many Indian Hindus who have migrated to take over Christian churches to turn them into Hindu temples, also install Hindu deities at public places without locals objecting?
According to News18 the majority of Hindus in the area have no objections to the installation of the statue, they say, “The Christians have been living here for centuries and there has not been any issue with them.” Local Christians also claim they have been living here for over 350 years and the “disputed” Kapalabetta site of worship has been theirs for over a hundred years. History reveals that the first ever record of Christian settlement can be found here in 1662AD. Harobele is home to about 3,500 Christian families and “there has been no conversion in the area. Our population was about 1,000 in the 18th century. It has now gone up to about 3,500. Is it not natural?” they ask.
Clearly locals dismiss the RSS claims and say it is aimed at creating trouble in a peaceful area. The BJP-Sangh Parivar is well known for eyeing religious places/structures/properties of all minorities living in India with fabricated claims — to instigate peaceful Hindus . The latest happening in Karnataka is no exception. Shame on all the troublesome leaders who’re the real anti-nationals and enemies of the country, they are living only to break the unity in diversity of India for political gains. Long live secular India!
— Jerry Fernandes, Saligao