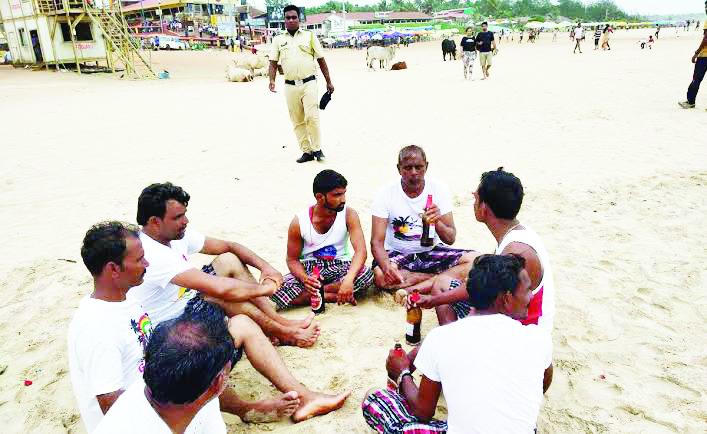 DANGEROUS: Goan beaches have become unsafe with domestic tourist’s carrying liquor bottles to the beaches and leaving broken bottles and other litter dirtying the beach.

Domestic tourist who drink on a beach and harass scantily clad foreign tourist’s have ruined the reputation of Goa as a sophisticated, laid back tourism destination.

Goa can experiment like tourist destinations across the world are doing regulate accommodation, bring together communities to brainstorm and enforce sustainable tourism For years the rest of the world has shouldered this home-grown burden stoically. Now that social change is finally ensuring we take responsibility for it, some of us, like Goa legislator Vijai Sardesai, are refusing to live up to the challenge.
Fifty million Indians are likely to be headed overseas by 2020, according to world tourism organization UNWTO. That’s at least 49.98 million badly behaved, dal-chawal-pickle demanding tourists set loose on the rest of the world—all rushing out of the aircraft first and simultaneously, their handbags loaded with freebies they acquired on the flight.
Our travel industry generated `14.1 trillion, or 9.6% of our GDP, in 2016, according to the World Travel and Tourism Council (WTTC) 2017 report. That’s the world’s seventh largest in absolute numbers, but we still do less business than a tiny country like Singapore.
Domestic wanderlust accounts for nearly 90% of the travel and tourism business. As middle-class incomes grow, air fares drop and the idea of vacationing gains acceptance, Indians are in exploratory mode—and this includes north Indians seeking adventure on the famed beaches of Goa. Predictably, this is resulting in unhappiness and despair for some of us.
Many domestic tourists who visit Goa are the “scum of the earth”, Sardesai, Goa’s town and country planning minister, said last week. He believes north Indian tourists want to “create a Haryana in Goa”.
“We are high in per capita income, social and political consciousness, we are much superior than people who are coming in. Those people, how will you control them?” added Sardesai, who hero-worships Che Guevara and describes himself on his website as a revolutionary whose cause is Goem Goemkar Goemkarponn (Goa, Goans, Goan-ness).
Sardesai’s statement about Goan superiority is a common enough sentiment in a country which casually throws around words such as “best” and “first” when referring to its people and past achievements. Prime Minister Narendra Modi played to this gallery when he recently declared that “democracy is in our culture”. There’s no evidence to back Modi’s belief but there’s more than enough proof to show that lack of hygiene and rudeness are embedded in our culture.
The world has been saying that Indian tourists are pigs since the 1980s at least, but we are experts at yelling “racist” when someone else points out our truths.

Yet I can sympathize with Sardesai. If we are so obnoxious abroad, imagine our porcine habits when we tour our own backyards?
I’ve seen those tourists Sardesai references. They are usually male, hunt in packs, loud, drunk, with the zoom lens on their smartphone cameras set to max to capture every cleavage and exposed waist, staring unblinkingly at every woman on the beach, their vision always seeing the sum of parts as greater than the whole. Of course some of them look more Goan than Haryanvi, but that is for a separate column on Indian men.
Spare a thought for those international travellers who are tough enough to brave our country. We assault them, harass them, ogle them and scam them. The internet is littered with blogs warning of “20 Common Tourist Scams in India”. Imagine the levels of resilience and optimism they require to wade through the swamp of our nastiness in order to complete their quest for peace and spirituality.
Goa’s real problem is not the people from Haryana; the real-estate lobby, the mining barons and the polluting industries are all destroying the state far more effectively than any north Indian tourist.
Besides, overcrowding of tourist spots is a real problem across the world. “One has only to see the crowds jammed against the velvet rope in front of the Mona Lisa to wonder if this is really the ideal way to view an artistic masterpiece,” says a WTTC report on overcrowding, adding that nearly 80% of the reefs in Thailand’s popular Koh Khai islands have been damaged by humans.
Closer home, tourism is destroying the priceless Jaisalmer Fort, according to Jaisalmer in Jeopardy, a UK-based charity set up to preserve and protect the architectural and historical heritage of this Rajasthan city. There’s litter in the Thar desert. The crisis at the Taj Mahal is so severe the Archaeological Survey of India said it will increase entry fees and limit the time a ticket holder can tour the Mughal monument from April.
Goa can experiment like tourist destinations across the world are doing—regulate accommodation, bring together communities to brainstorm and enforce sustainable tourism. But all that is harder work than blaming our tourist scum.
Maybe the only thing that can save us is to wait until the Indian tourist evolves enough to heed the advice of traveller and author Pico Iyer. “…when friends ask me for suggestions about where to go on vacation, I’ll sometimes ask if they want to try Nowhere, especially if they don’t want to have to deal with visas and injections and long lines at the airport. One of the beauties of Nowhere is that you never know where you’ll end up when you head in its direction, and though the horizon is unlimited, you may have very little sense of what you’ll see along the way,” Iyer says in The Art Of Stillness: Adventures In Going Nowhere. Yes, I know nowhere is going to be a hard sell to the Indian tourist who dreams of taking a selfie with a group of bikini-clad women on a Goan beach.
Priya Ramani shares what’s making her feel angsty/
agreeable.