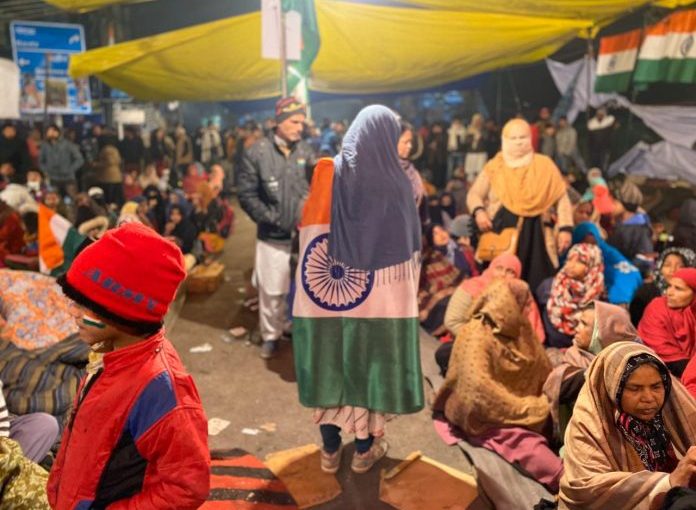 UNITED: Muslims and Hindus have come together to protest against the Constitutional Amendment Bill and the NPR

It is the Muslim women who have taken the lead in the over two month long nonstop protest against the CAA and the NPR at shaheen bagh Delhi. They insists that the CAA is unconstitutional as religion cannot be the basis for citizenship in the country.

For 24-year-old Izhar Hussain, an engineering student at Jamia Millia Islamia, these are difficult times. “There is an unsaid fear. The atmosphere is highly charged,” he says. “One never knows if the moment you ask the government to answer on jobs or the economy you might be called a ‘dangai (rioter)’.”
It’s a common refrain among the Muslim community residing in different parts of Delhi ahead of assembly elections on 8 February.
“Without any proof they arrest students, and an image is created on social media that the person is a threat to India,” adds Hussain, a resident of Okhla.
“It is difficult to counter such things. It has only become worse but we have not lost our patience.”
The fear is not helped by the fact that there is no ‘visible’ support from political parties even as the BJP has upped the ante using the protests at Shaheen Bagh to polarise the capital’s electorate. From Home Minister Amit Shah to union ministers Anurag Thakur and Giriraj Singh, BJP leaders have minced no words in making Shaheen Bagh a poll plank.
“AAP is doing development work for us not because we are Muslims, but because we are citizens of this country and residents of Delhi,” Hussain adds.
“They have given us free electricity, water and our women can travel safely in public transport. This distinction is important.”
For 39-year-old Dilfan Ali Pasha, the current situation is the darkest moment for the country’s Muslims. But Shaheen Bagh and Muslims’ resilience against a discriminatory law give him hope that it’s not all over yet.
Pasha, however, is clear on how the elections will pan out. “BJP ke liye Dilli abhi door hai. They can continue with the Hindu-Muslim polarisation but people of Delhi have seen through the BJP’s game,” he says. “This is not the Delhi of 1992 nor is this Gujarat of 2002.”
Others say they are sure of the “BJP’s game-plan”.
“If they can implement the NRC (National Register of Citizens) in Assam, they can do it anywhere in the country. Now the BJP is claiming it never mentioned NRC and that CAA is not about Indian Muslims. Then why can’t they clarify it in Parliament?” asks Shehzaad Hussain, a resident of Sarita Vihar.
“If a student protests today, they label them as rioters and they create such an image that people end up believing it. They way they assaulted students of a university, that too in a library is unheard of. We as a community are angry over this treatment and the only way to answer them is through our votes.”

The Muslim vote is an important one. Not only for the Aam Aadmi Party (AAP) but for the BJP too. Here’s why: To counter AAP on its governance plank, BJP leaders have been making provocative speeches in an alleged attempt to create Hindu-Muslim faultlines and polarise voters along communal lines.
The Arvind Kejriwal-led AAP, which got huge support of Muslim voters in the 2015 elections, doesn’t want to lose them this time but is also wary of openly extending support to protests against the Citizenship Amendment Act (CAA) at Shaheen Bagh.
Many of the Muslims ThePrint spoke to, say they understand AAP’s “political compulsions”.
“If Kejriwal does or says anything now he runs the risk of losing out the Hindu vote. You can’t win elections by getting Muslim votes only,” says Tasneem Iqbal, a resident of Bharat Nagar in south Delhi.
“The Muslim community understands that, and which is why we are not perturbed by his silence. It is an election and to counter the BJP you have to resort to such tactics.”
His sentiment is echoed by others too. “Delhi voters understand the value of a vote and will not waste it. They won’t fall for this Hindu-Muslim rhetoric,” says Pasha. “As far as Muslim voters are concerned, we are clear about AAP and its governance plank.”
A number of Muslim voters also feel that it is probably the first time that Delhi elections have become so overtly communal. Aware of this reality, they don’t want to “waste” their vote on Congress, which they say is nowhere in the game.
“Congress is nowhere in the fight, so why would I waste my vote on the party,” says Mohammed Yameen, a 40-year-old AC technician from Bharat Nagar. “With AAP, Sisodia has made it clear that he backs protesters at Shaheen Bagh. Kejriwal is quiet because of the elections.”
Many also feel, the BJP has only become emboldened in its second innings, which is reflecting in its daily politics.
“Things were still fine during Modi’s first tenure but it seems that power first got to their heads with the kind of majority they got in 2019 and then, after a string of electoral setbacks, they are resorting to polarisation techniques,” says Hussain, the student from Okhla.
“They tried to provoke Muslims through Triple Talaq, then Article 370 and then thought we would react on the Ayodhya judgment. But when they got no response they used their most lethal weapon — CAA and NRC,” he adds. “How can you exclude one religion? The Constitution doesn’t allow that… We will fight for our rights.”

Muslims constitute around 13 per cent of Delhi’s population. They are estimated to be over 50 per cent in five of the 70 assembly constituencies — Ballimaran, Matia Mahal, Mustafabad, Okhla and Seelampur. AAP has fielded all Muslim candidates on these seats.
They include Shoaib Iqbal at Matia Mahal assembly seat, Imran Hussain at Ballimaran, Amanatullah Khan at Okhla, Haji Yunus at Mustafabad and Abdul Rehman at Seelampur. There are around seven more constituencies where the Muslim population is between 30 to 50 per cent — Shahdara, Babarpur, Seemapuri, Sadar Bazar, Nand Nagri, Kirari and Chandni Chowk.
The BJP doesn’t have a single Muslim candidate in the Delhi elections. Its leaders are hopeful that the Muslim vote will get divided between AAP and Congress and benefit them electorally.
“The Muslim voter is not going to give us a chance. They will not vote for us, and we are aware of that. The seats that are completely Muslim-dominated, we know our candidate will not be able to match up,” a senior BJP leader said.
“But the appeasement politics that AAP is indulging in will help us consolidate the Hindu vote. Kejriwal has been caught in a trap and is being forced to speak on CAA and Shaheen Bagh. Delhi elections are turning around.”