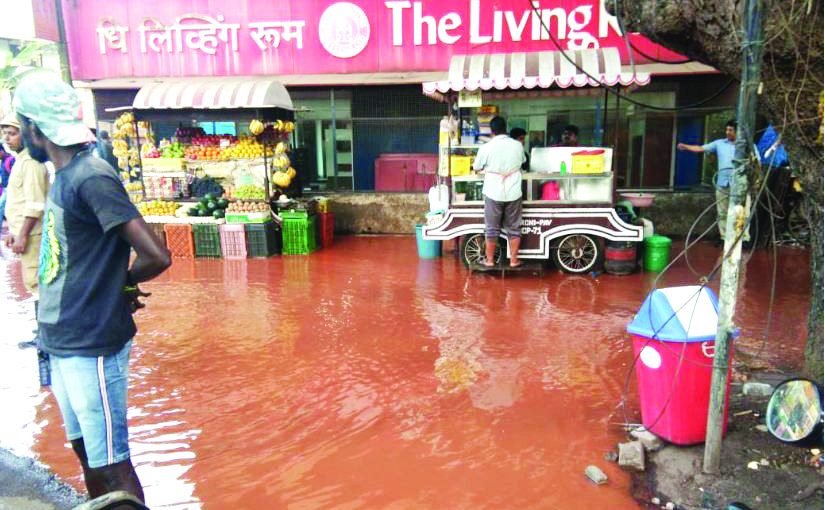 A main water pipeline burst near Caculo Mall at St Inez late night on March 12 leading to a flood of waters, putting early morning commuters to a lot of hardship vis-à-vis no water on tap at home and while out for purchasing their daily needs of milk, vegetables, household necessities — especially in the context of the coronavirus advisory alerting citizens to the pandemic – not yet alarming in Goa but taking a toll of life in Italy, Iran and other countries.(Pictures sent by Stephen Dias of Dona Paula, Panaji)

THE BJP is currently openly seen fixing rates and buying MLAs and MPs from other political parties in many states of India. And at least for the sake of pretending and showing that there’s rule of law in the country, the ED, CBI, Income Tax officers — none of these guys are even pretending to work, how is it that with all these transactions with unlimited funding from corporate offices across the country, the BJP hasn’t come under the scanner of any of these agencies. Not even the SC is pretending as if it cares! And people who are blaming the Congress for “looting the country for 70 years” have no idea how 70 years of wealth has been toppled by six years of BJP.
The current trading of MLAs shows that none of the MPs or MLAs believe in Constitution of the country. They’re here for a political career in stealing the people’s money and power. Even if some Opposition parties somehow manage to get a good majority and form the government, then within a year or two BJP has enough money to buy the MLAs and the MLAs are ready to sell themselves.
So what is the purpose of voting? If I as an individual am tired of the incompetence of the MLA of my area and voted for a different MLA and the guy I voted for wins and his party comes to power — then I’ll be happy. But now the trend is no matter who I vote for the party with the most money comes to power. The big question is why should we vote when parties with the most funding are allowed to make a mockery of our voting rights and rule over us in different parts of India????
— Jerry Fernandes, Saligao

FALLING PREY TO BJP
It is incomprehensible how the electorate is falling prey to BJP government wiles in the country. The BJP has flouted all norms of decency and democracy in the country and made the people of India subservient and subjugated them.
Take the case of investments. Because the Permanent Account Number (PAN) card and the Aadhaar card have been interlinked, all our investments have now become traceable by the government. In fact, it is not mandatory to link Aadhaar card with PAN card for your bank accounts and fixed deposits, as also Demat account as well as mutual funds. It is now possible with the interlinking of the PAN and Aadhaar that all investments are now known to the government.
The Aadhaar card was made mandatory by the Supreme Court only for social welfare schemes but the government has not made a way for investors to delink the Aadhaar card as mandated by SC. Also many other decisions such as the Citizenship Amendment Act (CAA), National Population Register (NPR) and the National Register of Citizens (NRC) have seen widespread protests because they are selectively anti-people.
The government seeks to monitor investments of the people of India but itself is neither transparent nor accountable as far as the financial accounts of the country are concerned. Banking sector is passing through tough times with non-performing assets (NPAs) eating away bank funds, especially in the public sector banks (PSBs). The merger of banks has not lead to consolidation of banks, but the total amount of money in the merged entities have contracted greatly.
It is hoped that the people of Goa will reflect on the Zilla Panchayat elections the wrongdoings of the BJP government which has brought pain to the people. It is time not to get bullied by the BJP tactics and deal them a sound defeat at the Zilla Panchayat elections.
— Elvidio Miranda, Goa
SANTOSH TROPHY POSTPONED!
THE final round of the Santosh trophy scheduled in April has been postponed by the AIFF citing safety and health of players and officials due to coronavirus outbreak! What about safety of the fans? Contrast this with Europe where matches are played behind closed doors! There it is the fans who are protected! India can send a spacecraft to the moon but when it comes down to basics, it is appalling?
What about the ISL final? AIFF has no say in the matter? ISL organizers were quick to declare Goa as the final’s venue: Quite convenient for them knowing the Goa government two hoots for the people? Again, Italy has to now quarantine the entire country just because of protocol failure with patients! Truly, one can now understand why banks are repeatedly failing in India, all because of who controls them and the country!
— R Fernandes, Margao

Fr Gavin Lopez (Mumbai priest) writes from Rome:
‘Friends may I humbly request you not to make the mistakes that the Italians made regarding the virus. Please refrain from immediate physical and social contact. This would mean avoid wedding receptions, house parties, going to clubs and restaurants, take off the menu things prepared outside your home, the food itself would be good but the packaging, crockery, table tops, surfaces it comes into contact with are all possible transmitters of the disease.
`Please put off all kinds of travel. Now the hard part gently in the most polite way turn down guest visits, hospital visits, condolence visits, etc. Distance keeping in Mumbai is not possible to wearing clothes that cover the whole body, long sleeves, high collars, socks and shoes…are vital. Masks are needed only when you reach a high stage of infection, prior to that avoid. Make sure you get rid of the habit of the cloth handkerchief for the time being, if you must clean any bodily fluid during this pandemic do so with disposable paper or monouse cloth. Eat healthy lots of veggies and fruit. I hope you do not have to see the day a lockdown is imposed.’
— Shared by Lumina Da Costa Almeida, Goa