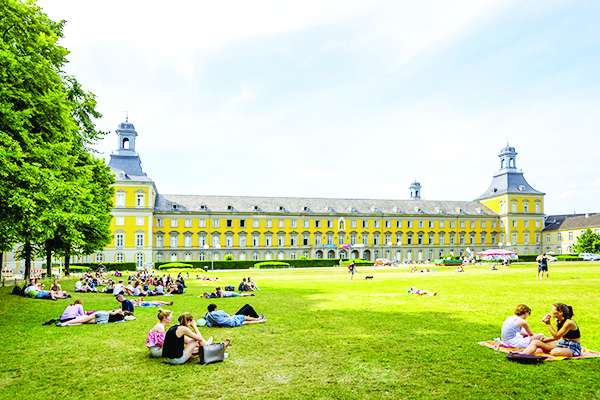 NO FEES: Germany has many public universities where you can study at no cost or at a nominal cost to cover administrative expenses. This is to enable poor families to learn the technologies of the future

You don’t need a rich father-in-law or a big scholarship to study abroad. Many countries in the world are offering free under-graduate education to migrants from all over the world. To create skills that are desperately needed….

While university fees continue to rise in many parts of the world, some of you might be thinking that getting a recognized degree qualification, either in your home country or abroad, is simply impossible without having a four- or five-figure budget at your disposal, or without obtaining a scholarship.
You’ll be pleased to hear that this isn’t necessarily the case. There are many countries worldwide where students are able to study abroad for free or for a very affordable amount. You just need to know where to look.
Below you’ll find a selection of countries that offer low-cost or free tuition, with details on eligibility and what current (low) university fees you can expect. To find internationally renowned universities in these countries, visit the QS World University Rankings® 2020.

Study in Germany for free

Interest in studying abroad in Germany just seems to keep on growing. This is largely due to the fact there are no undergraduate tuition fees at most public universities in Germany, and this applies to both German students and internationals, regardless of nationality. Just a small nominal university fee is charged, of around Euro 150-250 (12,313-20,522) (~US$170-280), to cover administration costs.
The exception is the state of Baden-Württemberg in south-west Germany, which reintroduced tuition fees for non-EU/EEA students in autumn 2017. These students must pay Euro1,500 (~US$1,660) (1,23,132) a semester (Euro 3,000 or ~US$3,320 per year) (2,46,264). PhD students and refugees aren’t affected, and the fees are reduced for those pursuing a second degree (to Euro 650 (~US$720) (53,351) a semester, which is Euro 1,300 (~US$1,440) (1,06,714) a year. It’s possible that other German states will follow and reintroduce fees in the future, as they seek to invest in and improve university education, so watch out for this.
Germany’s low study costs, combined with its strong economy and excellent higher education system, makes the prospect of undertaking study in Germany extremely appealing for both students and their parents worldwide. More than 40 German universities are featured among the world’s leaders in the QS World University Rankings – again, beaten only by the US and UK – with the highest place taken by the Technical University of Munich.
If you’re successful in finding a university where you can study in Germany for free, you will of course still need to budget for living costs. If you need a German student visa, you’ll need to prove you have around Euro 10,236 (~US$11,330) (8,40,253) per year for living expenses (with the average student spending Euro 850 (~US$940)(69,775) a month).
Two of the top destinations for study in Germany, Munich and Berlin, were also ranked within the top 30 most affordable cities to study in the QS Best Student Cities 2019.
France may not be quite as widely known as Germany for affordable higher education, but international students may be surprised to hear they can also study in France for free (or, at a very low cost), regardless of their nationality.
Although technically university fees do exist at public universities in France, they’re just a fraction of those charged in most countries, amounting to just Euro 170 (~US$190) (13,955) per year at undergraduate level for EU/EEA/Swiss students. However, from the 2019/20 academic year non-EU/EEA students will begin paying higher rates, with fees going up to Euro 2,770 (~US$3,065) (2,27,383) per year for a bachelor’s degree. However, the French government will be tripling the amount of scholarships available to international students, from 7,000 to 21,000.
Additional charges can bring the price of your studies up, particularly for more specialized programs such as medicine and engineering, but not dramatically. If you’re looking to study at a leading grande école, however, expect fees to vary widely.
As is the case in Germany, the majority of programs offering the chance to study in France for free are taught in the native language. However, there are a growing number of opportunities to study in English, particularly at graduate level. Alternatively, you can also attend a preparatory school to perfect your French skills before beginning your degree, but you’ll have to pay for this.
Living costs in France are also relatively affordable, amounting to around Euro 9,600 (~US$10,620) (`7,88,045) per year, though you should expect to pay more if you choose to live in capital city Paris.

Study in the Nordic countries for free

Known for their high quality of life, stunning nature and liberal politics, northern European nations (known as the Nordic countries) also boast some of the strongest higher education systems in the world. Nordic nations Denmark, Finland, Iceland, Norway and Sweden all offer opportunities to study free or at low cost:
In Norway, university study is available free of charge to all students, regardless of study level or nationality. Like Germany, you will only need to pay a semester fee, in this case around NOK 300-600 (~US$33-66) (2,106-4,211). The majority of undergraduate programs are taught only in Norwegian, and international students need to demonstrate proof of proficiency in Norwegian in order to study at this level. At master’s and PhD level, English language programs are far more common and free tuition still applies.
In Iceland, there are no tuition fees charged at the country’s four public universities, with only a registration fee of around ISK 75,000 (~US$600) (40,179) a year. Denmark, Sweden and most recently Finland only extend their free higher education perks to students from within the EU/EEA and Switzerland, meaning that students from outside these regions must pay tuition fees for bachelor’s and master’s programs. However, PhD programs in these countries are fully funded, offering exceptional PhD candidates the chance to gain their degree without paying fees, and earn a salary. Non-EU/EEA students can also still study in Finland for free if they study in either Swedish or Finnish. International fees at bachelor and master levels in Denmark, Sweden and Finland vary. In Denmark, university fees range from between DKK 45,000 and DKK 120,000 (~US$6,670-17,800) (4,94,058-13,17,489) annually, while in Sweden they fall between SEK 80,000 and SEK 145,000 (~US$8,200-14,870)(5,94,234-10,77,049) for most courses. In Finland, the recently introduced tuition fees currently amount to at least Euro 1,500 (~US$1,700) ( 1,23,132) per year, although most students will pay between Euro 6,000 – 18,000 (~US$6,640-19,900) (4,92,528-6,56,704)per year.
But what about living costs? Well, this is the catch, as the costs of living in northern Europe are among some of the highest on the continent. This is largely due to the healthy economy of the region and the strength of the Nordic currencies, so paying more for living when the streets are clean and the people are happy perhaps isn’t so bad. Four Nordic capitals have been ranked among the world’s top student cities: Copenhagen, Helsinki, Oslo and Stockholm.
What about other places to study in Europe for free or at a low cost? There are a number of European countries which offer affordable or free universities, without any need to sacrifice on quality.

Another country where students can study in Europe for free (or at a very low cost) is Austria. EU/EEA students enjoy the same rights as Austrians when it comes to the cost of higher education, and can study for free at any degree level. After this time, students pay a fee of just Euro 363 (29,798) per semester. International students from outside of the EU/EEA should expect slightly higher fees of around Euro 726 (~US$803) (59,595) per semester. Living costs will set all students back approximately Euro 11,400 (~US$12,600) (`9,35,804)a year. Vienna, Austria’s capital city, was ranked 13th in the QS Best Student Cities 2019.

All students from within the EU/EEA are able to study abroad for free in Greece at public universities and colleges, with the exception of some master’s programs. International students from outside of the EU are also eligible for low-cost higher education, at approximately Euro 1,500 (~US$1,660)(`1,23,132)per year. Greece offers one of the lowest costs of living in the European Union.

Although private universities in Italy can be known to charge fairly high tuition fees, public universities in Italy are markedly cheaper, charging between Euro 900 and Euro 4,000 (~US$995-4,420) (73,880 -3,28,352)per year for undergraduate programs. EU students are eligible for the same funding opportunities as Italian students, including loans, grants, scholarships and fee waivers. Milan is ranked 40th in the most recent QS Best Student Cities, while capital city Rome is 70th.

While Argentinian students all enjoy access to free universities, international students should expect to pay a small, nominal fee to enroll at public universities in the country. Private institutions in Argentina, on the other hand, can charge upwards US$5,000 (`3,76,102)a year. In the QS Best Student Cities 2019, Argentinian capital Buenos Aires is 31st.

In India, international students will typically pay tuition fees of no higher than US$7,300 (5,49,109)a year, though private university and graduate fees tend to be more expensive. Living costs in India are, for most students, likely to be very appealing – according to Numbeo, consumer prices are 163 percent cheaper than in the UK, while rental prices are as much as 391 percent cheaper. Overall, you should be able to live comfortably on as little as US$4,300 (3,23,448)a year. However, it’s worth noting that international students aren’t allowed to work in India during their studies.

Tuition fees in Taiwan offer great value, with its top universities offering affordable programs. For example, National Taiwan University (NTU), the location’s leading university at 69th in the QS World University Rankings, charged undergraduate students just TW$100,920-124,200 (~US$3,200-3,965) (2,40,705-2,98,249)per year in 2017/18. In the QS Best Student Cities 2019, Taipei was ranked 17th in the world and 14th for affordability.
This article was originally published in March 2015. It was last updated in August 2019. Want more content like this? Register for free site membership to get regular updates and your own personal content feed.