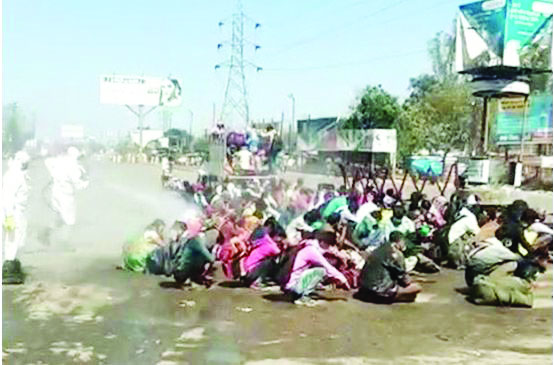 CRUEL: A large group of migrants walking back to their home towns in Bihar were forced to sit on the road and sprayed with chlorinated water in Raibarely the constituency of the late Indira Gandh

Starting from the Wuhan district of China, corona has spread across the world from India to the United States and the European Economic Community. It is wiped out all other news from the media. This is the first time all the world leaders ranging from Donald Trump to Vladimir Putin to our own Narendra Modi have had to take a back seat to a virus….

Epidemics resemble great warnings from which a statesman in the grand style can read that a disturbance has taken place in the development of his people.” Rudolf Virchow, recognised as the father of epidemiology, made this observation in the mid-19th century. The developments of the last two months indicate how astoundingly relevant this observation is to the present day.
So how has India, and the Indian media specifically, responded to this “great warning”. Today, when the COVID-19 story jams the airwaves and all that newspapers have is news on the virus, it is difficult to imagine that it took us over two months to pay it the attention it demanded.
When it first appeared in news space around the third week of January, after China confirmed the human-to-human spread of the novel coronavirus, it remained something of a curiosity. Indian air authorities began screening travellers from China around mid-January onward, but that was still very much an “airports” story. As the tentacles of the disease spread across China, the Indian media, by and large, considered it very much a China problem. There was both smugness and complacency that marked the early coverage, with an added tinge of racism. It seemed at that point that the coronavirus would remain confined to China’s borders and wouldn’t dare venture across to the land of its “vegetarian” neighbour. The hashtag, ‘NoMeat_NoCoronaVirus’, actually trended on Twitter on the morning of February 2 (see The Wire story of February 2, ‘No Meat, No Coronavirus’ Makes No Sense‘), early evidence of the misinformation that would soon proliferate like the virus itself. The lockdown of Wuhan was considered in some media coverage as a sign of totalitarian excess, while others berated the Chinese leadership for acting too late and with secrecy, putting the world at risk. But these were academic questions largely speaking.
Look at the number of “great warnings” that actually came our way. By January 30, India was reporting its first case, but the alarm this should have caused was largely absent. The Ministry of AYUSH responded by suggesting ayurvedic, homoeopathic and unani treatments, without citing any research findings to back up its gratuitous advice. This was the first of many loose suggestions that circulated freely in the social media space yet raised no red flags in mainstream media coverage. Amitabh Bachchan may have emerged the official ambassador of the most bizarre remedies purporting to beat the virus, but let’s not forget that the ‘cow urine-is-a-cure‘ phase that the country passed through. Perhaps because it was sponsored by members of the ruling party and its affiliates, it occasioned no conspicuous media outrage as it should have. It was Mamata Banerjee’s police that displayed the spine to make the first arrest of an organiser of a cow urine consumption event, but this didn’t happen until the third week of March, after the country had recorded a steadily rising graph of COVID-19 cases, some of them resulting in death. If any evidence is needed on the danger of spurious remedies, one just has to look at Iran, where AP has just reported that nearly 300 people have been killed and more than a 1,000 rendered seriously sick for consuming methanol after social media reports claimed that it cured those suffering from the disease.

There was also a fair degree of congratulatory coverage over Kerala’s legendary healthcare. As three patients who were among the first to show signs of the disease recovered and were discharged, the highly premature chorus that the state, because it had defeated Nipah, will now defeat COVID-19 too, rang out. Such euphoria is also dangerous in times of pandemics. While there can be no disputing that the health system in Kerala is streets ahead of most states (‘Caught Between Outbreaks, Kerala’s Model for Public Healthcare Lauded’, March 21), the COVID-19 challenge calls for circumspection, not congratulations, because it is only just unfolding and holds consequences that cannot be predicted, only imagined.
Coming back to the Virchow formulation, let’s now examine how the “statesman in the grand style” did during this crisis. Here there was more of the “grand style”, than the “statesman”, I would say. Prime Minister Narendra Modi’s ability to persuade has never been in doubt, evidenced in the concerted manner the steel plates came out on balconies at 5 pm sharp, helped by astute behind-the-scenes media manipulation. A television programme I was watching around that time was interrupted by the announcement that the mandatory clapping will now take place, and sure enough the air in the drawing room was filled with sound of applause that transported one to a Modi election rally instantly. Meanwhile, hidden and not-so-hidden influencers did their job. Accompanying a tweet from Saina Nehwal, who has incidentally joined the BJP in search of pastures greener the sporting field no doubt, was this tweet from Narendra Modi himself: “Let us heed these important words of our champion shuttlers. . Then came Nehwal’s tweet: “I pledge that I’ll strictly follow Janta Curfew this Sunday frm 7am to 9pm so that we strengthen India’s fight against the Corona Virus.This will bring us together and we’ll stand strong as a nation in this critical time! @narendramodi #IndiaFightsCorona”.
A carefully researched analysis carried in The Wire, ‘It’s Essential to Sift Through Hate-Driven Misinformation on Coronavirus’ (March 25), drives home the point that it is through influencers that misinformation circulated this time: “Some of the fastest travelling misinformation has come from public figures airing unenlightened views. These highly influential social media influencers (included) Amitabh Bachchan, Rajinikanth, Pawan Kalyan, Mohanlal as well as a number of lower-level celebrities…”
The writer of the piece, ‘Modi’s Moral Science Lecture for a Nation Facing a Crisis’ (March 20) profiles the prime minister as a “patriarch”, who “remains mostly silent and distant but always has everyone’s best interest at heart and is available to dispense good advice”. Such framing also “taps into a deep yearning among many Indians – not all of them bhakts – for stable ‘Indian’ values and certitude in a fast changing world, and especially during moments of crisis.” However, there is a problem when patriarchs deploy propaganda. As the article, ‘It’s Dangerous to Be Taken in by Propaganda in the Time of Corona’ (March 21), argues “propaganda never allows the most important fallout?’ (March 25), seemed to confirm that niggling fear. It also noted a paradox at the heart of this situation: “If things don’t improve post mid-April, the very business model of newspapers will be threatened. At the same time, this is the time when we really need newspapers and a free press”.

Having said that, don’t know if I approve of The Times of India for its touchy response to The Print (‘Times Group Sends Legal Notice to ThePrint for Article on Coronavirus and Newspapers’, March 27). This is just one more instance of media leviathans guarding their waters zealously against the forays of cyber minnows. Yet they think nothing of drawing content from these very players without even an acknowledgement. The Karan Thapar interview with former R&AW chief A.S. Dulat, about an impending rapprochement with Farooq Abdullah, appeared in The Wire first (‘‘Kashmirs Don’t Want to Die Cheaply’ Says Former RAW Chief on Absence of Mass Protest‘, March 15), but it was never acknowledged as a source. Play fair, Big Daddy!
The feeling of standing at the edge of the COVID-19 abyss came in through in many mails I received over the last fortnight. The Wire reader, Deepak Jha, writes: “Taali and thaali is important for unity but this is not the solution…The question arises: Why hasn’t India tested enough? Why did awareness campaigns start so late? Why don’t we have enough isolation wards? Why are testing labs so few in number given the population? That this situation prevails in a country where more than four thousand people die because of tuberculosis every year, shows the seriousness of the government about achieving health for all. We therefore need to start questioning the government on this situation, if we are a rational society. Today we are dealing not just with a health crisis but an economic one. For nature, everybody is equal – and this is the lesson that the coronavirus has taught the world.”
Sometimes the crisis has had painfully personal consequences. Kanishk Rathore, an IIM graduate, reveals his own recent history: “I work as a Manager-Marketplace, E-Commerce, for HIDESIGN. I joined on March 2, 2020, after leaving my well paying job in Delhi. On March 21, I was asked to resign by the company’s founder and HR director. There has not been a lockdown in Puducherry, yet the organisation has started laying off employees even after the request by the CII and government not to do so. This is an injustice to more than 120 employees, including myself, since we are rendered economically unstable and jobless at a time when a pandemic has overtaken the world.
I thank an alert reader, Muralidharan Vishwanath, for pointing out an error in my last column, ‘Backstory: Only Unbiased Journalism, Not Riot Videos, Can Bring Justice on Delhi’s Violence’ (March 14), in the line “Two, hate speeches were not, going by their chronology, linked to anything that any BJP politician said – presumably the speeches and slogans raised by Kapil Mishra, Anurag Mathur, Parvesh Verma, Ajay Singh Bisht, or even Shah himself, could not be faulted…” The second name should have read as ‘Anurag Thakur’, the current minister of state for finance. Apologies for that error.