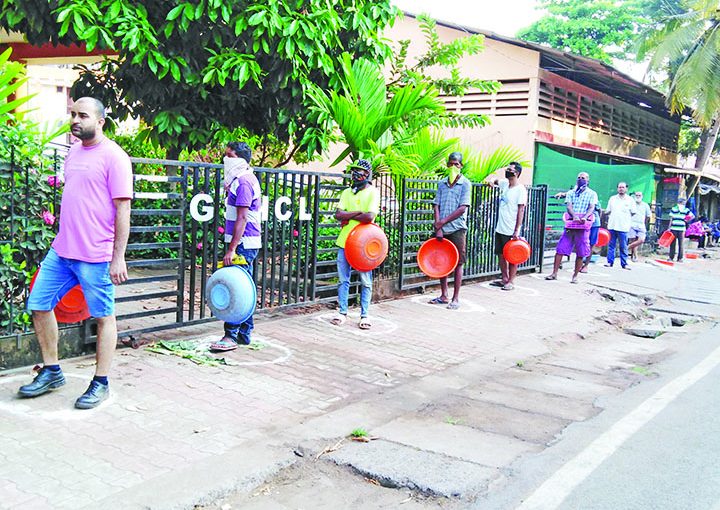 And most are feeling safe at home!Memoirs during the times of coronavirus scare in Panaji by Tara Narayan…

ONE WEEK at home was bad enough! But second week running and I’m going stir-fry crazy. Is there going to be no respite from the coronavirus scare in the air. Where is it? Reportedly it’s now air-borne to drive the fear of death in every mortal soul. Initial disbelief had to give way to serious thinking and anxieties. Ever since Prime Minister Narendra Modi called for a nationwide lockdown from midnight of March 24, 2020, the chant all around is stay at home, stay at home, stay at home, you idiot…or else. Nobody wants to know or else what? Everybody, everybody but those who have to work for day-to-day existence knows all about or else what!
These are the days of the coronavirus and nobody up or down there know when it will end. To recap the story a bit coronavirus fever started to rise four months ago in China and hit India by the beginning of the year but did we take it as seriously as we’re taking it today? No. Take your time, no hurry. Then it was here pronto with all those wake-up, wake-up horror scenes of coffins in Italy making the rounds on social media and we in India were running around like the proverbial headless chickens…at Centre, State governments and at the level of the people.
Or maybe not so, we are told various people are doing a great job of containing the runaway pandemic or rather epidemic in Delhi (take a bow Chief Minister Arvind Kejriwal), Kerala (take another bow Chief Minister Pinarayi Vijayan) and Maharashtra (one of the worst affected states after Kerala)? Also here in Goa where everyone is counting their heartbeats at home hoping that there is life at the end of the tunnel of being incarcerated at home from March 21 really, home second week with nothing to do but clean, cook, stop talking to the hubby and asking him to do something….I dare say déjà vu can be as deadly as corona virus infection. And I can be so ungrateful!
Home becomes a veritable prison. It’s as if one’s life is being taken over by social media rising in the morning to retiring at night with Chief Minister Pramod Sawant taking to video interviews telling us at length about how all’s well in amcho Goem, fear not niz Goenkars! It’s just a respiratory infection one hears, just? We’re just a drop in the ocean compared to the heart-wrenching scenarios of Italy or Spain, Iran or the UK. First Chief Minister Sawant announced a one day stay at home and it was a Sunday, everybody indulged him. Then came the second announcement at home for two more days and finally came Prime Minister Narendra Modi’s fait accompli 21-day announcement and after that everyone and everything started buzzing…with dire messages of stay at home, stay at home, step out on the streets at your own peril, you may never make it back home again!
What the hell, overnight Panaji became a ghost town and those who ventured out on foot or bicycle or scooter in search of milk, newspapers, vegetables, snacks…returned home disappointed. Of course the ghost situation couldn’t last beyond two or three days for this is India and even in Goa not everybody lives in a rose garden! It’s no big deal for those who live in rose gardens (metaphorically, well-endowed in the creature comforts of life with lots of cash stashed away in property, jewelry, FDs, etc) and could order home most everything they didn’t have by calling up several telephone numbers in their black diary for home delivery. A rose garden friend of mine cooed over the phone, “What do you want sweetie? I’ve got a special person who gets me things and I’ll get your Amul butter for you, just come over on your bike tomorrow morning and collect it from the gate watchman’s cabin…we’re a gated colony and won’t be allowed to come up and see me, you understand why, everybody is being very careful about this corona virus thing. If you find any long beans during your morning ride outs with the local farmers of Caranzalen please pick up some for me….” I told her to go to heaven where I won’t be seen dead or alive!
Still, so it went, the powers that be will do anything to keep their citizens at home, and soon came videos depicting how police were swinging their lathi around here and there, they were joined by Central Police Reserve Force guys — presumably because Goan cops were too lathi happy beating up innocents venturing out in search of milk or eggs or bread or maybe some fish…someone at Camarabhat was selling eggs, go early to get them if you wish.