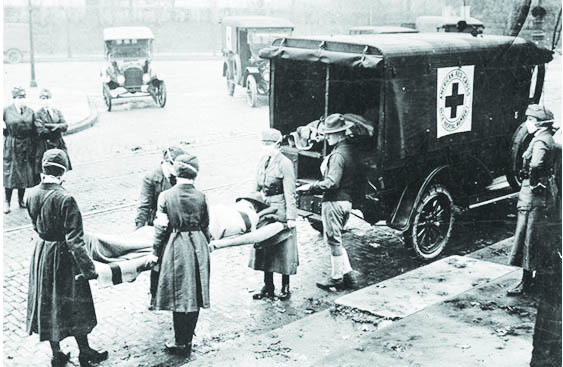 GRACIOUS: At least in the case of the Spanish flu those who lost their lives could get a graceful funeral instead of being buried 12 feet deep in a de-contaminated body bag. This is because the coronavirus is so infectious that even those handling a funeral casket or a kafan can get infected

The last global epidemic the Spanish flu claimed 10 million lives since neither medically or administratively we were prepared for such an epidemic. There were no vaccines, drugs or therapies like blood plasma at the turn of the century…….

As COVID-19 balloons into a global health crisis, parallels are being drawn with the Spanish influenza of 1918-19, considered the most devastating pandemic in recent history, with an estimated toll of 20-50 million lives.
The focal point of that pandemic a century ago was India, where between 10-20 million died. The disease hit India in two waves — an initial, milder attack followed by a severe wave through the country in the autumn of 1918. The disease is believed to have been brought to India by World War I soldiers returning home.
A study published in 2014 estimated weekly deaths in 213 districts of nine provinces to compute “statistical measures of the severity, speed, and duration of the virulent autumn wave of the disease as it evolved and diffused throughout India”. These estimates, say the authors, “characterize the pattern of spread, mortality, and evolution of the 1918 influenza across India using spatial or temporal data”The study found that over time, (a) the severity of the epidemic diminished; (b) the velocity (average time to death) of the wave slowed down; (c) the wave grew longer in duration; and (d) the eastern portions of India were the last to experience the pandemic.

Why it tapered off

So how was the outbreak eventually tamed after it had passed through the length and breadth of India? There are at least three possible causes, Prof Chandra, Director of the Asian Studies Center at Michigan State University, told The Indian Express.
“(i) That word got around about this killer disease (either through government efforts or through informal communications) so that, by the time the influenza reach Calcutta (now Kolkata), people were practising social distancing and taking other preventive steps that people in Bombay and Madras had not been able to take because the disease caught people at the early locations unawares.
“(ii) The virus evolved as it spread across India, becoming milder in the process. There is a theory that, as viruses propagate, the more virulent strains are unable to survive, reproduce, and propagate as effectively as the less virulent strains, because their hosts die before the virus can jump to new susceptible hosts. This changes the composition of the virus in an infected population from more virulent strains to less virulent strains as the disease moves across a population.
“(iii) Differences in climate across India. Influenza viruses tend to not do as well in warm and moist conditions as they do in cooler, drier conditions.”
However, Prof Chandra said, “We do not know definitively which of these three conditions applied to the pandemic in India”.
The Sanitary Commissioner at the time did draw a correlation between the “crucial summer monsoon rains” and the virulence of the disease. The Commissioner noted on several occasions in his report that the low mortality rate along the coastlines was striking, lending support to the “humidity hypothesis’.
The study was carried out ahead of the centenary of the pandemic in order to try and design appropriate strategies for possible future outbreaks. “The lengthening and weakening of the pandemic wave as it swept across India…. has broad implications for pandemic control strategies,” the study says. “The duration and intensity of pandemic control measures will need to be judiciously calibrated to the variable nature of any future pandemic wave.”

As another pa ndemic is upon India, the importance of a quick initial response cannot be overstated. The study concludes: “In scenarios resembling the 1918 pandemic as it unfolded in India, locations close to an entry point will have extremely short windows of time to deal with a virulent pathogen, placing emphasis on the emergency management of a short and severe wave of illness.
“While locations that are distant from the entry point will have longer windows of time to prepare for and deal with less lethal variants of the disease, their task will be prolonged by the more gradual build-up and subsidence of the epidemic wave.”
There is another important takeaway for India from the 1918-19 pandemic. “If the phenomenon of‘a ‘dampening’ wave of mortality as the influenza progressed was indeed caused by increased awareness and the concomitant social distancing and other measures that people started to take”, Prof Chandra said, “then there is a very important lesson for us, and that is: be extra vigilant about hygiene and aggressively practice social distancing”.
One way to create this mindset, he said, is to “imagine how you would behave if you knew that everybody around you is infected”. Dampening the wave of infections will be key to preventing India’s ICUs from becoming overwhelmed — something that might have been achieved in northern Italy through early and aggressive social distancing measures.