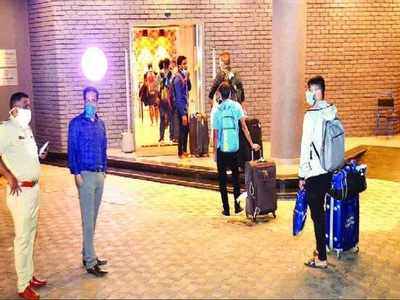 Observing strict protocol: Home is the sailor, home from the sea! After an agonizing wait Goa’s first batch of stranded seafarers finally disembarked in Mumbai, where they were checked for Covid-19 and later transported by bus to Panaji on April 29, 2020. They arrived in two separate buses late on Tuesday night, some can be seen here checking into the Taj Group’s Ginger Hotel at Patto for the fortnight’s quarantine. Ginger is one of the most compact, comfortable venues selected by the Goa government for quarantine purposes, so no accommodation complaints here!

GONE are the days of the Kuwait war when Indians and also our Goans were repatriated safely with due consideration as Indian citizens. OCI cardholders who acquired Portuguese, British or any other foreign nationality are Indian citizens with OCIs. India does not have a dual citizenship option like Pakistant, Bangladesh and other countries. Otherwise Goans would never have given up their Indian citizenship.
They are our citizens in all humanity though formally the nationality is different due to circumstances. They add to the revenue of businesses, economy and banks of the State. Can our government provide them jobs if in Goa? So why the hostile attitude towards sons and daughters of the Goan soil?
It hurts to understand what is wrong in the psyche of some sections of society filled with hatred and to read the vile comments on social media and newspapers. Some elected representatives have joined this chorus. It does not matter if those stranded abroad are Indian or Portuguese in the present emergency of the coronavirus pandemic, they need our help in the highs seas to come back to their families in Goa. Confined in cabins they’re counting days to be repatriated safely.
Other countries have acted promptly and got their people back to their home country. Hope this government feels the same and acts soon to end the pain of our people being abandoned abroad.
–Jo Dias, Chandor

NEVER FEAR!
IN fighting against justice and highlighting the wrongdoings of those in power, nobody and nothing should intimidate you. One should never be cowed down by any threats or consequences to be faced for speaking out a truth fearlessly. We should never compromise and surrender our right to speak out openly and candidly against anything that is wrong. Let us never hesitate in taking the bull by the horn. Truth hurts but it is only truth that will always ultimately prevail. One must have the spine to speak out against things that are wrong. Stand up and speak out for the sake of our Goa.
Politicians and people in authority by virtue of their position should be ready for both bouquets and brickbats. Freedom to fight against social ills is the very hallmark of a true democracy; unfortunately some who ride to power on a contrived electorates are unable to withstand close scrutiny. The voices of critics are not necessarily of those against a dispensation but should be heard as a voice of inner consciousness: A call to rectify or to perish. In a democracy the power vests with the people and they are supreme. They can sweep in or sweep out a government.
Truth is always bitter. Buddha had said that three things cannot be long hidden: the sun, moon and truth. At times one pays a heavy price in fighting public causes but one has to maintain the spirit and keep on fighting. Life is a short voyage; a journey – the end of which we know not. So let’s keep up the fight. We should never lose sight of what Martin Luther King Jr had said, “Injustice anywhere is a threat to justice everywhere.”
–Aires Rodrigues, Ribandar

NEVERENDING CCP CHAOS
DURING this novel coronavirus lockdown we are expected to observe a lot of instructions from the Centre as well as our Chief Minister Pramod Sawant. Earlier the lockdown was up to April15, then extended up to May 3 and now rumors have it will continue up to May 18. Is the lockdown here for months on end with nobody sure when our safe stay at home will actually end? People are praying daily to see the end of this lockdown so that can get back to regular water and steady power supply.
At Dona Paula we experience either low voltage or power surges and appliances keep getting damaged. We can’t even go out to check at power station or water department to find out when regularity will be restored. Another problem is garbage. Garbage is piling up and not lifted. Garbage is shoved here and there to accumulate as dumps. The CCP itself is dumping garbage at the Campal stadium because our garbage has no permanent venue.
Roads continue to be in a sorry state and pre-monsoon digging up has started. Very soon there will be a problem stagnant and accumulating water turning into mosquito breeding havens and our very own epidemic of malaria and dengue fever will commence. Several places in Caranzalem are already seeing cases of dengue where the CCP is executing a lethargic job of clearing dumps and clearing gutters professionally enough….taking out the stinking gutter refuse totally and removing it from the site.
Plus, Mayor Uday Madkaikar is at loggerheads with ex-MLA Sidharth Kuncalienker. The present MLA of Panjim could step in but he is keeping safe distance and everybody is passing the buck as usual playing the blame game. Nothing changes coronavirus or no coronavirus.
–Stephen Dias, Dona Paula

LOCKDOWN WITHOUT BUSES
GOVERNMENT offices, autonomous bodies, industrial units including IT firms in the State might have resumed operations some weeks back, but the government of the day which promised to put into operation a few KTC buses, to transport government employees, teachers, etc, to their respective offices/schools/colleges has still failed to do so, especially in interior villages and due to which one there is total chaos/confusion daily most parts of Goa.
And with Goa Police strictly not allowing (forget strangers, office colleagues, close relatives or neighbours) even legally married husbands to transport their own wives on their two-wheelers. In the name of maintaining social distancing! Although the general public has been allowed to make a mockery of social distancing in most grocery/vegetable/chicken/mutton selling shops, yards, etc, in most cities and village markets.
Most government employees and teachers (mostly females) from the interior villages are currently finding it very difficult to travel to their respective destinations for work in Goa. Now, with such double standards, funny restrictions and with still no KTC buses in most interior villages of Goa, how does those in power expect the female govt staff, teachers etc (most of whom who do not even own or know to drive two-wheelers) to travel far-away places for work daily from their home? Or do they expect them to travel in their own private helicopters or personal jets from their villages for work in all the major parts of Goa?
The government should immediately look into the the hardships of transportation and ease them, especially for its female staff going to government departments, schools/colleges and so on, by planning things more professionally, provide them with transport (morning, afternoon and evening) not just in main cities but also in all the interior villages, instead of harassing them selectively. By making a mockery of the word “social distancing” and simply continuing with the current meaningless lockdown to inwardly play dirty politics in the name of fighting the coronavirus pandemic in Goa…over to the Goa government.
–Jerry Fernandes, Saligao