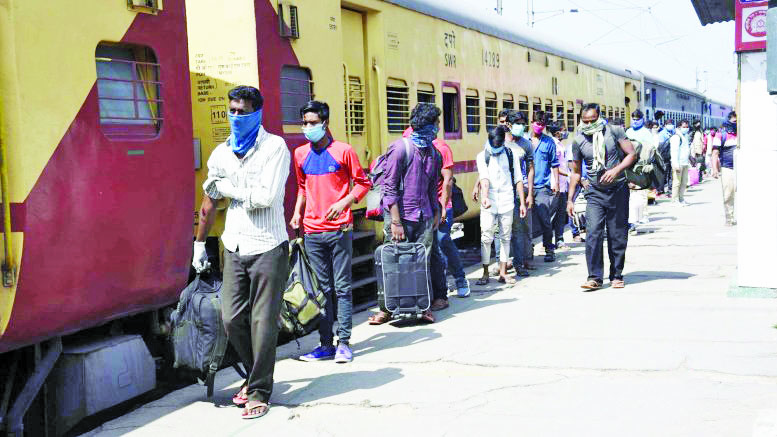 And so they’re leaving, goodbye Goa. It’s been nice or not nice knowing you or something like that! After more than 40 days of being stranded with lost jobs and hunger pangs assailing them in less than perfect situations given the novel coronavirus lockdown, the first Shramik Express train from Goa left for Gwalior (MP) with around 1,200 migrant workers from Thivim Railway Station at 11am on May 8, 2020.

GOA IN NEED OF QC

To ensure that every government project is properly and meticulously executed, Goa desperately needs full-fledged quality control department that is well equipped to technically and administratively monitor and ensure strict compliance of established standards. There should be no room for any substandard construction.
The glaring defects that have surfaced now on the prestigious Atal Setu Bridge is so disturbing. This cable stayed bridge over the River Mandovi which is just over a year old originally cost 462 crore, but to date it has escalated to a whopping 540 crore. Let us keep our fingers crossed on that assurance that this bridge would last over 100 years.
Less said the better on the infamous 2014 concretization of the Miramar-Dona Paula Road. While responding to the petition I had then filed, the government submitted an affidavit before the High Court solemnly assuring that it would be a state of the art road which would also have a dedicated cycling track. But the end product is there for all to see. A shoddy road with cracks all over. The work has been so poorly and shabbily executed with that promised cycling track nowhere in sight.
On public display today across Goa is the glaring poor construction of the highways and the connecting flyovers. All this is unacceptable as taxpayers money has to be very judiciously spent on every project with quality of the works never ever compromised. Every building constructed so also every road has to be a very lasting one. A successful project is the one which can achieve a balance between cost, time, and quality. Citizens need to be also vigilant about public projects coming up in their neighborhood as ensuring quality is everyone’s responsibility.
— Aires Rodrigues, Ribandar

EXCISE DUTY HIKE!
CASHING on the continued fall in petroleum prices to a two-decade low, the government is eyeing Rs25,000 crore savings from storing oil in ships. Yet, they refuse to pass on anything to the consumer. Excise duty on petrol and diesel have been hiked to Rs32.98 and Rs31.83 to cash in on the low petroleum prices and garner Rs1.6 lakh crore! This, they say is done to meet the coronavirus fight! In 2014, the respective duties were Rs9.48 and Rs3.56!
Yet, we see that testing of the virus must be paid for with no assurance on its reliability. Quarantine of Indians from abroad must be paid for. Industry is crying for bailouts in taxes, electricity and water sops! They will increase their rates of consumer goods. They have cut jobs. All measures taken to benefit the industry means extra burden on the local citizen! What benefit does the local citizen get? Economics in India is based on the simple ABC analysis: Small amounts from large volumes! The citizen comprises the large volume and the businessman the low volume and hence large amounts!
— R Fernandes, Margao

SC TRAMPLES NATURAL JUSTICE
IT is a shame that the 2-judge bench of the Supreme Court succumbed to the pressures from the government to allow the construction of the Mopa airport which was definitely a travesty of justice. Judges of the Supreme Court seem to have lost their inalienable right to be independent and to protect natural justice at any cost, which they themselves swear by often. Those who have conspired to trample natural justice for their vested interests will not be spared when they are subject to natural justice, which does not fail and which strikes mercilessly on those who have harmed nature. The present gains will just be transitory.
54,676 trees rejuvenating the air of the plateau by the process of photosynthesis are being butchered in Mopa to serve the interests of those who will pay a big price for their transgression; 46 crystal clear water springs of medicinal therapeutic value are being destroyed; the fauna which is mainly consisting of endangered species such as bison, tigers, pangolins, civet cats, porcupines, wild boar and macaques are going to lose their natural habitat and a variety of birds and butterflies are being displaced from this sensitive eco-system which is an extension of the Western Ghats and a United Nations protected area.
In fact, tourists would want to go on a safari to Mopa to view these exotic animals and be in the lap of nature, but it will turn out that these very tourists won’t be making use of Mopa airport and like several other airports in India will become a ghost airports haunted by those who have been cheated to satisfy greed.
The Covid-19 pandemic is a clear and present reminder that none who infringe on natural law will be spared but will bear the tragic consequences of their greed for lucre rather than respect for nature and its laws.
— Elvidio Miranda, Saligao

Latest on Covid-19
The latest COVID-19 official news is that India has reported 3,390 new coronavirus cases and 103 deaths in the past 24 hours. This takes the total number of cases to 56,342 cases and deaths upto 1,886. The recovery rate is 29.35% with 1273 – a record number – having been successfully treated in 24 hours. Overall 16,540 patients were discharged from hospitals after treatment. Delhi alone saw 448 new cases on Thursday, single day biggest spike. The recovery rate in the city state which is the third worst-hit in the country is 32.39%. Maharashtra is on top of the list as worst hit with 17,974 cases and 694 deaths so far, with Mumbai accounting for 437 deaths. Gujarat is the second largest affected in the country with 7,012 cases and 425 deaths; Tamilnadu is third amongst worst hit states with coronavirus and is in total state of closedown. (From the sound of it novel coronavirus is going to be around for some time!)