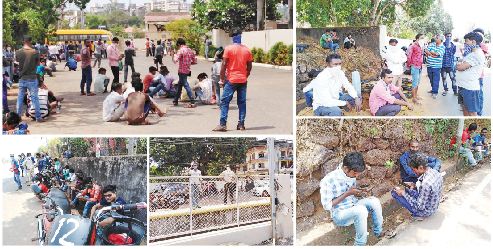 Migrant workers anxious to return to their home states: Waiting to register at the Taleigao Community Hall last Saturday morning when long queues straggled along from 7am onwards… breaking queue as the heat built up to seek shelter beneath trees in the vicinity. Nothing to do but wait with or without masks on, some stayed busy with their mobile phones, some climbed the fence searching for water…

Migrant workers have had enough of Goa through 40 plus, plus days of strict lockdown and want to go back to their native places now as quickly as possible…

IT is an irony that just as Goa is putting the lockdown away into a Green Zone there are so many migrant workers impatient to go back home to their family homes in Uttar Pradesh, Bihar, Jharkhand, Maharashtra, West Bengal, the North Eastern states of Assam, Manipal, Nagaland, Manipur …the lockdown came like a sudden bolt from the blue on March 22 and soon it was fait accompli. All kinds of folk were stopped from stepping out of whatever accommodation they were staying and this impacted migrant workers most because most of them stay in rented rooms miserably tiny, sweaty holes-in-the-wall.
Add to this that their employers one after another abandoned them to their own resources with a little or without practical aid. Despite MHA guidelines dated March 24, 2020, stating that if any landlord was found forcing migrant workers to vacate rented premises would be liable for punishment, these were only sweet words from Prime Minister Narendra Modi which turned sour rapidly as after a month landlords and landladies asked their migrant guests to pay up on their rooms or the rooms would be locked to keep them out…in Calangute where there are clusters of West Bengali workers , at Betim in Pernem, Indira Nagar, Siolim, Taleigao, Vasco da Gama and most everywhere in the small wealthy state of Goa where migrants come in search of greener pastures.
At first most migrants thought it would be just a blink of an eye lockdown and what is this novel coronavirus everyone is so scared of, forcing people to wear expensive masks bought from chemists’ shops for Rs15 (disposable) to Rs50 (washable and recycled) and “yeh social distancing kya hai?” The working classes may not be able to afford masks so they strung handkerchiefs around their mouths and nose and that would have to do while they waited it out, spending whatever savings they had to eke out a living as best as they could in their digs across urban and semi-urban Goa up north or down south.
Many headed to bus and railway stations to find out that lockdown meant all interstate travelling too had come to a stunning halt. This was a real blow. Regardless of whether they had coronavirus or not they could not go home. Quickly it dawned on them that they were stuck in Goa jobless, more or less homeless…true, some help did come by way of distribution of rations courtesy North and South Collector’s offices (government of Goa) and various good Samaritan groups who managed to raise donations from right thinking Goans and went about distributing food packets to those in need at construction sites (where many workers were holed up) and across Goa at various pockets where Goan patrao rented out accommodation (rentals from Rs4,000 to Rs8,000 which were often shared between two or three workers).