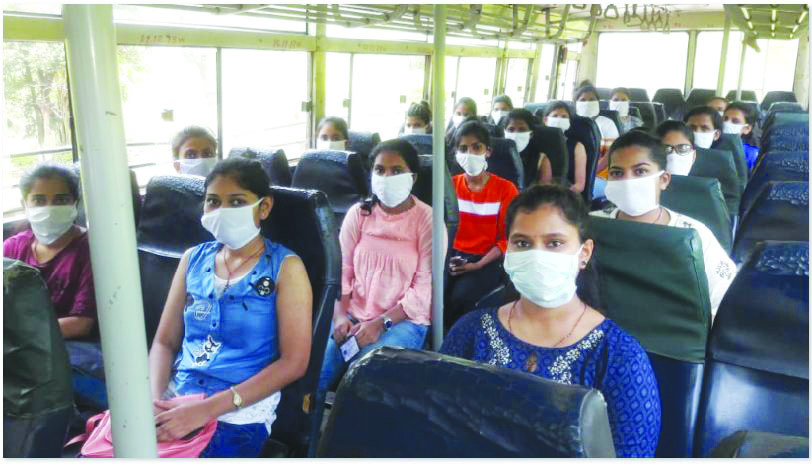 All smiles in the bus bring them back home to Goa! Sixty nursing students stranded at Ghataprabha in Karnataka, along with 25 others in Kerala and Dakshin Kanada, Udipi, Karwar and elsewhere, due to the nationwide coronavirus lockdown, were brought back to Goa on May 14, 2020. Upon arrival in Goa all of them were referred directly to Azilo Hospital, Mapusa, for screening for coranavirus infection and thereafter taken to Peddem (holding area). After they test negative they will be allowed 14 days home quarantine. The entire mission successful was monitored by Interstate Movement Cell officers Paresh Rivonkar, Gauresh and Mahesh Pandit.

WORLD Health Organization envoy’s warning that Covid-19 cases in India will hit a peak by July-end should be taken seriously. States like Maharashtra, Gujarat, Madhya Pradesh and Tamil Nadu should take stricter measures as far as social distancing, use of masks and sanitisers is concerned. It is prudent that de-congestion of heavily populated cities, towns and areas in these states, will decrease the spread of Covid-19.
Cleanliness and hygiene of badly affected states should be stricter. Before the onset of the monsoons the government and individual people should put into place maximum measures to discourage the spread of the novel corona virus infection, as during the monsoons the temperature will fall by about five notches below. Then the environment could sustain the virus for a longer time and the contagion would spread more.
Also teach people how to take measures to enhance their immune system in the affected states by distributing health supplements. The State governments with the help from the Centre should defer opening of large-scale industrial units which are labour intensive to a later date so as to contain the spread of corona virus. The affected states should redouble efforts to stop Covid-19 from spreading.
— Elvidio Miranda, Saligao

Risk Assessment please!
All enterprise is governed by Risk Assessment and their mitigation. This is now mandatory for all Industry.
According to press reports the Goa government is planning to open up economy post 17/5 on almost all fronts except education, but including tourism! Citizens have a right to know of risk assessment has been done and by which authority? A daily’s report on how a man from Rajasthan came to Goa by road, the illegal things he did, and the Goa government’s unwitting help given him proves that there is a very high risk in the form of poor methods to contain movement of people from Red Zone to Green Zone Goa even during under lockdown.
Note these risks: During training of teachers for community survey no social distancing was followed. After opening up sale of groceries Gandhi Market was also opened where it was impossible to maintain social distancing. Other places which had space for this also flouted the same.
Again, the Health Department approved use of sanitising tunnels at Valpoi, but these were never tested for efficacy against Covid-19 (and in fact harmful to humans). Such tunnels also psychologically lowered hand hygiene by giving a false sense of being completely virus free on passing through the tunnel. To date the government has neither approved nor banned sanitising tunnels.
Hand sanitzers are being sold and promoted in Goa but none guarantee effectiveness against Covid-19! The Goa government is also silent on this matter. Sanitizers must show that they conform to WHO standards and only those which say they are effective Covid-19 prescribed to be at chemists. One report in the US states that many people are getting sick on the job with Covid-19 (First Post, May 13, 2020).
It is also clear that choc-a-bloc people in hundreds buying liquor in Delhi and other States cannot handle social distancing or any curbs. With 70% coranavirus tax imposed in Delhi, promotions by hotels in Goa and flights will ensure that such people will be the first to visit Goa! It has been proven time and again that the government cannot handle tourists during non-pandemic times. Drinking on beaches, though banned, continued unabated.
Witness the fact that a car from Rajasthan which checked in at the border wasfound in North Goa with the number plate removed, and no papers. The cops instead of arresting the driver threatened locals. Our CM and ministers are openly demanding that Goa police do not harass tourist drivers: this government has no control over its own police! This means all SOPs are being interpreted on the spot by the man on the street.
The Goa government is taking a major risk in opening Goa to visitors from Red Zone area, opening up to Red Zone means Goa will cease to be a Green Zone and become a Red Zone. Just a couple of days back GMC doctors had no PPE! What is the risk of having one undetected infected tourist? Ten such tourists, 5 or 20? How many beds, ventilators, etc, will be required and for how many days? Who will do surface sanitisation and how? Who will certify? The government’s prime responsibility is to its citizens. Goa has so far seen just seven positive cases wherein the patients themselves had followed proper protocols. Otherwise it has no experience in handling larger numbers and is taking a major risk by permitting tourism to come into Goa. Goa needs to change its objecties.
— R Fernandes, Margao

POLICE ATROCITIES
WITH the Covid-19 infection scare and vigilance to stop its spread many policemen and policewoman showed charity by reaching out the elderly, poor and vulnerable. A few sang songs to raise awareness about the deadly virus and won recognition. Our police force deserve a big applaud.But it is also true that a few days back it was shocking to see how a police constable from Ponda was himself seriously beaten by police in Ponda over some issue of wearing mask. A single bad action brings bad reputation to all the good work done. Goa still remembers how a seafarer from Goa was brutally murdered at a police station at Panjim. A seamen in Salcete too was severely beaten. The culprits still roam scot free after token suspension. Police themselves should take stock of all this and stop brutalities once and for all. The use of excessive physical force on innocent citizens whose tax- payers money they draw on for their wages must be put to end.
Why should the police mercilessly beat anyone black and blue even for minor crimes? Sometimes they make citizens wait at the police stations day. Filing of false FIRs to intimidate should be a crime.
Police are there to protect citizens and they should realise this. Any police officer engaging in violence should be hauled up and educated on the subject of human rights and the Goa Police Commission should take serious cognisance of these serious assaults on citizens.
— Jo Dias, Chandor

NO DELHI TRAINS, PLEASE!
DESPITE an alarming continued spurt in the number of new Covid-19 cases across the country, it is a matter of great concern that regular trains are being allowed to come from Delhi’s Red Zone into Goa which is currently in the Green Zone. Five trains a week will be arriving from the national capital and this would be catastrophic.
Goa may currently be virus free but there can be no room for complacency as we are battling an unknown vicious enemy that has devastated the entire mankind across the globe. Over the last few weeks this unprecedented lockdown caused a lot of hardship and inconvenience to all which the brave people endured in the bigger battle against the raging virus.
Let us only hope that all this effort does not go in vain while the looming global pandemics shows no signs of tapering down. Allowing trains into Goa at this juncture is a very skewered decision. Government has an obligation and duty to protect its people. Yes, the economy is important, but the wellbeing of the people has to be a priority.
— Aires Rodrigues, Ribandar