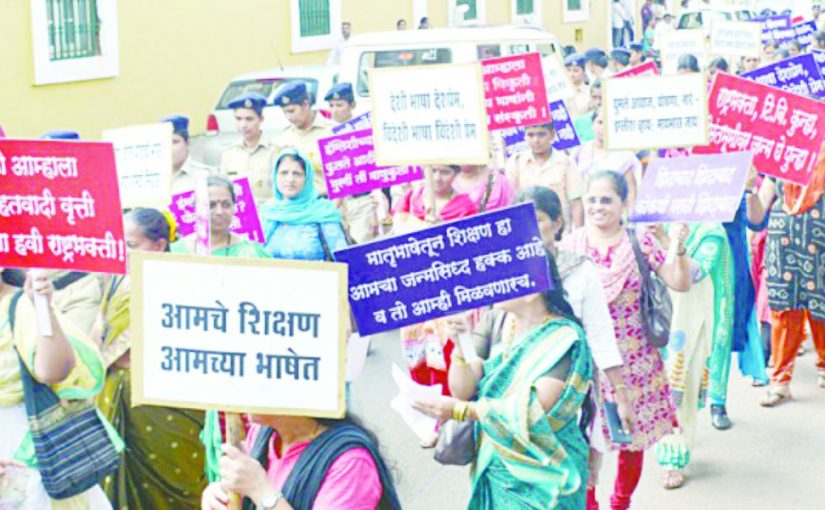 PROTEST: The Konkani agitation was marked by dozens of protests all over Goa with marches (picture above) protesting outside the Panjim Police Headquarters demanding that Konkani should be the medium of education

Goa is the only state which had to wait for over 33 years to attain Statehood. This was primarily because of the war engaged in between the Marathi and Konkaniwadi groups. The biggest huddle to Goa achieving Statehood was the unfortunate fact that Konkani, the mother tongue of the people of Goa, did not have a written script. Konkani had one father but alas, too many mothers……

BOTH Maharashtra and Karnataka fought bitterly to merge Goa with them after the Liberation of Goa. The strong Maratha lobby which had many top leaders in the Congress party lobbied very hard. Indeed, they were shocked when in the first Legislative Election to the Union Territory not the Congress but the Maharashtrawadi Gomantak Party came to power, supported by the Maratha lobby. The only objective of the MGP was to merge Goa with Maharashtra. Both the Legislative Assembly of Maharashtra and Goa passed a resolution merging Goa with Maharashtra. The desperate Konkani mogi rushed to the late Prime Minister Indira Gandhi. They reminded her of the promise of Jawaharlal Nehru that Goa would remain a Union territory for ten years after which the people of Goa would be permitted to decide their own destiny.
Indira Gandhi upheld her father’s promise and conducted the Opinion Poll on January 16, 1967. Thanks primarily to leaders like Vasudev Mahadeva Salgaocar (VM Salgaocar), politician Jack Sequeira (of United Goans party) and advocate Uday Bhembre of the anti-merger group won by a comfortable margin. But regrettably Goa did not get the status of a full-fledged State as the choice in the Opinion Poll was between merger with Maharashtra or Union Territory State. It was alleged by other senior United Goan leaders that Jack d’ Sequeira was bullied or bribed by the late SK Patil who is alleged to have given the franchise for Coca Cola in Goa to him.
Even though the anti-merger group won the Opinion Poll and the unique identity of Goa was preserved, there was a deep desire for the conversion of the Union Territory status to Statehood. But to acquire statehood Goa needed an official language. The states in the country were divided on a linguistic basis. It was universally accepted that going by the fact that every Goan spoke Konkani and considered it as their mother tongue, it unfortunately did not have a common script. While the Catholics wrote Konkani in the Romi alphabet script, Hindus wrote in the Devenagiri script, while Goans who migrated to Kerala and Karnataka wrote Konkani in Malayalam and Kannada. As the editor of the Herald I strongly believe that the latent desire to make Konkani the official language of the State should be fulfilled. This would enable Goa to achieve the status of statehood.
It was a difficult struggle. The Congress was in power in Goa and the Marathi lobby headed by than Chief Minister Pratapsingh Raoji Rane was very strong. Besides Rane there were several other senior ministers in the Rane cabinet like Anna Zantye who were in favour of Marathi becoming the official language. This would have defeated the purpose as no two states could have the same official language. For three years under the leadership of the Konkani Bhasha Parishat, we Konkani mogi fought to make Konkani the official language.

I RECALL writing front page editorials every day for three years under the title Utt Goenkara. To the extent that whenever I went for a function jokingly people would offer me a seat saying “bos Goenkara.”
In addition I wrote front page pieces demanding that our mai bhas should become our raj bhas. The demand for Konkani becoming the official language was strongly oppose by the then Marathi champion newspaper Gomantak edited by Narayan Athawale. Every day we would abuse each other in print on the front page and in the evening we used to sit down and relax over army rum and batatwada! We were professional rivals but close personal friends since I knew him from my Indian Express days in Bombay. At the end of three years during which there were dozens of morcha and agitations with three Konkani martyrs killed under pressure from the then Prime Minister Rajiv Gandhi, that Chief Minister Rane was directed to pass the official language bill making Konkani the official State language. Even on the day on which the resolution was to be passed there was pressure from the Marathi lobby to stall it.
Afraid that Rane would sabotage the bill Rajiv Gandhi sent his own personal observer to make Rane behave. Rane had his way because though the official language bill was passed it stipulated that Konkani in the Devnagiri script would be made the official language. This is the only case in the country where any official language act specified the script. This was done deliberately to marginalise Catholics who were than more than 40% of the population and they were more familiar with the Romi alphabet script than the Devanagiri script (Marathi is also in Devanagiri script).
But I still believe that given the circumstances and the very strong opposition to Konkani there was no other choice but to accept the Rane-backed resolution that Konkani in the Devenagiri script would be the official language of Goa. Worse still the official language virtually granted equal official language status to Marathi. Even 33 years after Goa was declared a State on the May 30, 1987, Marathi continues to enjoy virtually equal status with Konkani, as it is used for all official purposes including invitations for official functions.

GOA is the only State in the country where invitation for official functions are send in four languages — Konkani, Marathi, Hindi and English. Any time the use of Konkani was approved for any official purpose the Marathi lobby ensured that Marathi would also be used for the same or similar purpose. I remember that on the day the official language bill will pass Churchil Alemao came with a huge crowd to the Herald office which was down the St Tome Chapel road at Fontainhas.
I was enjoying my moment of triumph elsewhere. Since Churchill & Co started resorting to violence I rushed back to office. A furious Churchill kept demanding that the heading the next day should say “BETRAYAL!” The fact remains that whatever may have been the compulsions that is how Goa got its desire for Statehood fulfilled. Never mind that even now though Konkani mai may have finally become the lady of the house, Marathi mausi continues to be around in the aangan. It is perhaps similar to the story of Lord Krishna. Though Lord Krishna was reportedly in love with Radha he could not marry her. But Lord Krishna continued to have great affection to her.
Significantly, Goa and the Konkan are the only areas in the country which give precedence to the observation of Tulsi Vivaha over even Diwali. Which would suggest that Goans believe that love is as important or more important than marriage! Goa is now a full-fledged State and Konkani is the official language. But much to the distress of the minority community Romi Konkani mogi are still considered as second class citizens.
In fact, the declaration of Konkani in the Devanagiri script as the official language created enormous problems for the minority community. In the early 90s soon after the official language bill was passed the Rane government was toppled and Dr Proto Barbosa became the chief minister with Ramakant Khalap as the deputy chief minister. The education minister in the Cabinet was Sashikala Kakodkar, the daughter of the first chief minister of Goa, Dayanand Bandodkar. She was still very angry that Marathi was not made the official language. Sashikala Kakodkar withdrew grants to all schools except those who were teaching in the vernacular medium.
This resulted in a situation where while Kannada and Urdu schools got official grants, Konkani in the Romi script or English schools were denied grants. Former Chief Minister Manohar Parrikar who was anxious to get the support of Catholics restored grants to English- medium schools run by Christian organisations who had switched over without permission from Devenagiri Konkani. Even now the fights goes on why grants are being given to English schools run by Catholic societies when these are denied to English schools run by Hindu societies. The minority community and English have had the last laugh.
Over the 33 years since Sashikala Kakodkar amended the official language act denying grants to English schools over 80% of the thousand odd Marathi primary medium schools have closed down. What the politicians would not do the aam aadmi achieved and now the largest number of schools in any language in Goa are in the English language.
So maybe we should pass another amendment making English the official language of all schools in the country which is the ground reality. Interestingly, in Goa while everyone has to study in Devanagiri Konkani script till the 4th standard to get the government grants, from 5th standard onwards all government schools switch to the English medium.