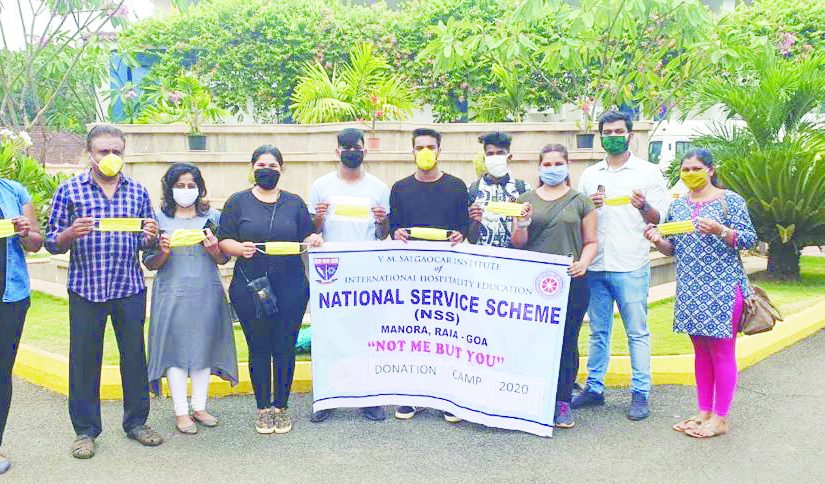 GET USED TO WEARING A MASK, PLEASE!

MASK DONATION CAMPAIGN BY STUDENTS OF VMSIIHE IN RAIA: On a sunny day students of the NSS Unit of the prestigious V M Salgaocar Institute of International Hospitality Education (VMSIIHE) in Manora, Raia, visited homes in the vicinity to distribute 250 masks, as well as to urge residents to rise to the current challenges of Covid-19 pandemic. Students and residents exchanged notes on their worries and anxieties about washing hands, wearing masks, stepping out of their homes, social distancing and other guidelines being announced by the government of Goa to be safe and secure. The students visited 60 homes to distribute masks and residents were touched by the gift of masks and agreed that wearing a mask will go a long way in safeguarding against infection.

CHIEF Minister Pramod Sawant has rightly decided that there is no urgency in holding the postponed Zilla Panchayat elections. In fact, after discussing the entire issue with all stake-holders it would be in Goa’s interests to scrap this unnecessary idling extra layer of governance and instead more powers vested with the Panchayat.
The government has also rightly decided that all persons entering Goa should undergo the COVID-19 test. This should be stringently followed as allowing our borders to be porous will lead to catastrophe. In this pandemic and lockdown in place the cash strapped Goa government should not waste time and money holding functions to inaugurate a grade separator at the airport or launching a ferry boat!
Instead government may please focus all its energy in planning to deal with the COVID-19 crisis and to prevent its spread in Goa with the assistance and guidance of experts in the medical and allied fields.
— Aires Rodrigues, Ribandar.

TOURIST SMUGGLING!
Illegal transportation of objects, substances, people, etc, is termed as “smuggling.” North Goa hoteliers have resorted to smuggling tourists to Goa! Considering that most Goa ministers have hotels and have already started sounding the opening of the same, unscrupulous hoteliers have greedily jumped the gun and resorted to online advertising for tourists in lockdown! Unlike other types of such crimes in this case the locals are put to risk.
We hear talk of attracting high end tourists. What is required is high integrity hoteliers! What value addition do hoteliers actually bring? Ninety lakh tourists visiting Goa need food, drinks, beds, entertainment. Hoteliers just do that. Do they even provide local cuisine? No, only the dish names are local. Ditto cultural entertainment. Entertainment in the form of beaches, hidden hinterland picnic spots, local festivals such as carnival, etc, are all high-jacked from locals who now perforce give up the same.
The only entertainment brought in by tourist businessmen is prostitution, massage parlours, drugs, gambling and the right to official protection to do as they will. Hope paper setters do not forget to include current affairs such as conflict of interest: Hotel-owning ministers opening up to tourists from Red Zones when coronavirus positive cases are still rising to a peak.
— R Fernandes, Margao

Goan Catholics are not anti-nationals
A few non-Goan elements of late are seen abusing Goan Catholics (including the Bishop, Goencho Saib and the Catholic Church) by daringly posting comments on different social media groups even in times of the ongoing coronavirus pandemic on a variety of issues somehow trying to paint them as outsiders, if not as anti-nationals in Goa.
They are seen making baseless allegations and trying to portray the entire Catholic community as slaves of the former Portuguese regime for holding Portuguese passports/for going to European countries for employment, for practicing their new-found religion Christianity and for allegedly converting Hindus into Christianity by fraud or allurement in Goa. They also claim that Goan Hindus never believe in converting people belonging to other religions in Goa.
Well, if Goan Catholics are really involved in converting people then how come their population is still not increasing in Goa till date? And yes, if the majority community does not believe in converting others (as being claimed by them) then how come so many of our Catholic girls who have married Hindu boys have also been successfully converted into Hinduism in Goa so far?
I feel that following any religion is one’s personal matter and if one decides to convert into another religion then no one has a right to become aggressive or violent because it is not a crime to choose/practise the religion of one’s own choice in a democratic, free secular country like India as per the Indian Constitution.
Those who keep saying that their religion alone is the original one to show that they are the sole custodians of India, just to enjoy all the benefits as first-class citizens, should compulsorily conduct their DNA tests to scientifically prove (which practically is near impossible) that they are indeed the original inhabitants of this country, instead of blindly calling themselves as born superior or claiming ownership rights (forget India) but also of this whole universe
— Jerry Fernandes, Saligao

GOAN FRUITS & NUTS ARE TASTIER
In Goa the earth and it’s soil isendowed. It is rich in essential minerals in generous quantities which contribute to the taste of fruits and nuts grown in Goa. Goan climate is conducive to growth of a wide variety of fruits and nuts, we get ample rainfall with allows for growth of sturdy. The mancurad mangoes are king of Goan mangoes and delectable and are globally popular. Goan cashew nuts have a very fine taste as the cashew apples which make for good quality neero as well as fine quality cashew feni and urrack. The elaichi and Moira bananas are the finest available. The Goan coconut has a distinct quality taste. Goa is also known for it’s jack fruits. Also the Goan pineapple has got not only a lustrous exterior but is very tasty.
The other Goan fruit are papaya, custard apple and the chickoo which have a distinctive good taste. People in Goa should try to plant these fruit and nut trees in their backyards and orchards to propagate. Goan fresh produce especially now as the monsoons are round the corner and thus provide for themselves Goan fruit and nut.
— Elvidio Miranda, Panaji
ARROGANT RTO
THE other day at the RTO office at Paryatan Bhavan I saw an elderly man in the queue to pay for something. He was shocked and embarrassed to find that cash is no longer accepted. The person behind the counter told him to ask someone to pay for him by card and to give that person the cash. The poor chap was indignant. How embarrassing to have to ask around for help to make a payment even though you have the cash.
Being dependent after a lifetime of hard won independence he told the people behind the counter he’d give them the cash if one of them would use their cards. They all refused. Luckily one or two of the bystanders stepped up and offered to help the man out without forcing him to stoop to begging for help.
I understand the logic behind digital payments but it’s sad that we are leaving half our country behind, bewildered and struggling. If this is not digital tyranny in new India, what is it ?
— Karen Dias, Panaji