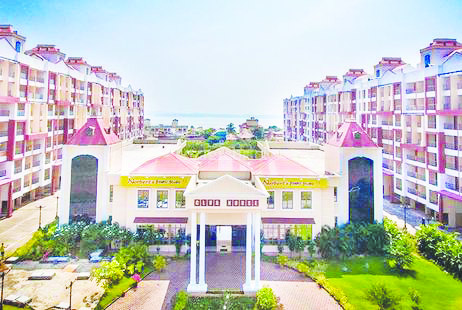 SNOBS: The rich and the powerful who live in gated colonies have banned not only newspaper delivery boys but even maids from coming to the homes of the residents. The result has been senior citizens are forced to do the house work including sweeping and mopping the floors, washing vessels, etc, at gated colonies like say, Models Millennium or Gera’s at Caranzalem

Covid-19 has virtually killed the print media and badly affected the electronic media. The print media has been a biggest victim because of a rumor that the virus spreads through the distribution of newspapers…..

The Covid-19 pandemic means almost a quarter of the world’s population is on lockdown. Here, IABM head of insight and analysis Lorenzo Zanni looks at some of the effects on the media and broadcast industry.
IABM has been running an international survey over the last 10 days asking broadcast and media professionals to assess the impact of the coronavirus pandemic on their businesses. The survey is still running and everyone is encouraged to contribute their responses here – but we already have enough responses to begin to paint a picture – and it’s not pretty in many areas, although there are pockets of opportunity too. Clearly the broadcast and media industry, like every other sector, is feeling the negative impact of the virus, particularly when it comes to events, advertising revenues and media technology investment. Let’s have a look at each of these effects:

Media technology is an international sector that has historically focused on high-value, C-level sales that are better conducted face-to-face. Media technology trade shows are not only an extremely valuable vehicle for closing deals but also a place for discussing future technology roadmaps with customers openly, particularly at a time when technology is changing so rapidly and unpredictably. Losing access to all of this is undeniably damaging and will prevent some deals closing as well as some important discussions taking place.
In response, IABM has leveraged its unique position to provide a one-stop, up to the moment online portal for the whole industry – the IABM Virtual Platform – intended as a central hub for the broadcast and media industry, and a constantly growing repository of the information that technology buyers need to continue to operate successfully during the coronavirus pandemic.

Advertising revenues are highly correlated with the performance of the economy. As the world has become more globalized, countries’ macroeconomic performances have gradually grown more connected. This has made the world better and more prosperous; but has also increased its volatility and inherent risks. The better response to risk and volatility is diversification, which is why several commercial broadcasters such as ITV have tried to diversify their revenues away from advertising and towards other funding sources such as subscriptions and content licensing. However, advertising still accounts for a large share of the media industry’s revenue. The impact of coronavirus on countries’ macroeconomic performance is and will be real and extremely damaging.
The chart below shows this starkly – and technology suppliers are even more pessimistic than their customers, the broadcast and media companies. To put the scale of this in perspective, ITV in the UK was already forecasting a 10% drop in advertising revenues in early March – even before the full effects of the pandemic were generally understood in the UK. The cancellation of physical events – particularly sports – is also partly responsible for this drop, and the knock-on effects for sports-based Pay-TV broadcasters, unable to fulfil their obligations to customers, are yet to be fully felt. With people staying at home and consuming only necessities, there is a lack of demand for many types of goods – and supply – through the lack of demand as well as through increased uncertainty. In the media industry, this is leading to a sharp decrease in advertising spending.

The trends mentioned above along with the general climate of uncertainty and disruption will very likely negatively affect investment in media technology – as the revenue outlook for suppliers responding to our coronavirus tracker survey shows. Our Tracker results below also shows where the drop will be most pronounced – and which areas will be protected or even benefiting, with investment going down for 38% and up for 21%. From a BaM Content Chain® perspective, Connect is the only segment showing a positive outlook as end-users try to put infrastructure in place to work remotely – a major technology shift.
Events not happening may prevent some deals from taking place as discussed earlier. Broadcasters exposed to declining advertising revenues will experience greater financial pressure, which would result in lower budgets for media technology investment as well.
Moreover, the cancellation of sports events is set to greatly impair the revenues of broadcasters that deliver them to viewers. These broadcasters have spent huge sums of money on rights and technology infrastructure to enable these events – most of this investment may be already a sunk cost.
This is also not a good time for disruption as many media technology suppliers are in the middle of a transition to as-a-service models – see our Adapt for Change report for more info on this – which is significantly affecting their cash flows. However, from another, more positive perspective, this could be the best time for this external shock to happen as the industry is more dependent on software revenues than it has ever been before according to IABM data.
In fact, the impact of the virus on demand will arguably be greater for hardware manufacturers who are seeing their supply chains being disrupted by the virus and highly rely on trade shows to drive sales. Suppliers in the middle of the transition to as-a-service models may push their next-generation software products more aggressively to compensate for the decline in legacy offerings. Software suppliers need to be ready for a rapid move away from licence-based sales to subscriptions as broadcasters squeeze their outgoings
These are issues that the industry needs to face in the upcoming months, as the virus continues to spread worldwide. However, this is a dynamic and resilient industry that has the strength to adapt to these changing dynamics. Below, we have included some of the positives of this crisis for the broadcast and media industry:

People will not stop meeting other people for conducting business. The face-to-face element of interactions, particularly in an industry like media technology where high-value technology discussions are essential, will remain key. However, the whole industry needs to temporarily adapt to this moment of disruption and go virtual. Fortunately, there are a lot of conferencing tools like Zoom to conduct virtual business meetings in an effective way. People will use them if they are forced to do so by the virus. As an example, Microsoft has seen a 500% increase in Microsoft Teams meetings in China after the outbreak.
Of course, it will be easier to conduct demos for software providers. For those that have the possibility to do so, it could be worth experimenting with SaaS selling models like free-trials as well – again, see our Adapt for Change report for more info on this. Some software suppliers like Signiant and Limecraft have already announced initiatives to enable customers to have unlimited users. We do not see virtual as a substitute for trade shows but rather as a powerful complement to them. More reliance on virtual should help suppliers have more continuous relationships with their customers as well. A more proactive digital presence by suppliers through tools like webinars and customer surveys should at least partly compensate for the lost time at events. As mentioned earlier, the industry is more reliant on software than it has ever been, which makes this a good time for making a temporary move to virtual.

Earlier, we have talked about how advertising revenues are being hit by the macroeconomic crisis created by the virus. This does not really apply to subscriptions. Subscriptions are a more stable and predictable revenue source which comes directly from consumers. Yes, consumers will be hit by the decline in business activity but expect governments to intervene to mitigate the socio-economic fallout of this situation. Italy provides a good example of this. The Italian government has launched an initiative of “digital solidarity” to incentivize cultural, educational and entertainment businesses to provide their services free of charge during this critical period.
Also, expect consumers to drastically shift their consumption preferences during this period and view digital entertainment products more as necessities as they increasingly spend more time at home. This does not apply to all types of subscriptions but mostly to those that rely on scripted content – as noted earlier, sports may be strongly hit by the cancellation of events. As a result of more countries adopting lockdown measures, streaming consumption is skyrocketing, which has led several OTT providers such as Netflix to cut the quality of their streaming. If we look at the revenue sources of media technology suppliers, subscriptions are also more likely not to be hit by the more uncertain economic environment compared to large license fees and deals

Coming back to media technology investment, although uncertainty will impair spending as in most other sectors, some broadcast and media organizations may be forced to take a more digital approach to cope with the increased risk of physical contact. We have often highlighted how media technology buyers have been inclined to take a “wait-and-see” approach when investing in new technologies such as cloud and IP. In some sectors, there has been some aversion to the risk of investing in new technologies due to their potential impact on current operations. Risk preferences may shift radically as a result of this external shock. Our Tracker certainly underlines this.
Technologies such as cloud are key to successful direct-to-consumer models and enable workflows to be conducted remotely. As direct-to-consumer benefits from the greater demand for entertainment and physical contacts are minimized worldwide, more investment could go into virtualizing operations. This transition is not going to happen overnight as it is a complex one. However, the current crisis may push some technology buyers to accelerate their move to safeguard their employees and effectively continue their businesses. According to our analysis of text feedback received through our tracker, many technology buyers are likely not to go back to where they were before after they have gone virtual and experienced the benefits of cloud-based technology.
Creative Innovation

Finally, this crisis is certainly going to spur some creative innovation in terms of new programming formats and workflows as demand for entertainment rises while supply shrinks dramatically. Sports broadcasters for example may be leveraging their archives to create new content for fan engagement as well as experimenting with new formats that do not rely on live production. News is already adapting to the lockdown requirements with several programs around the world gathering experts’ input through consumer video technology. These trends may also produce some lasting changes in the industry.
The coronavirus crisis is going to change business in 2020. The broadcast and media industry will be affected by the shock created by this but could take some actions to adapt to it. There is no way to be sure of the real effects of this crisis but in a time of such uncertainty it is worth looking at the glass half full and understand how we can all make the most out of the current situation.