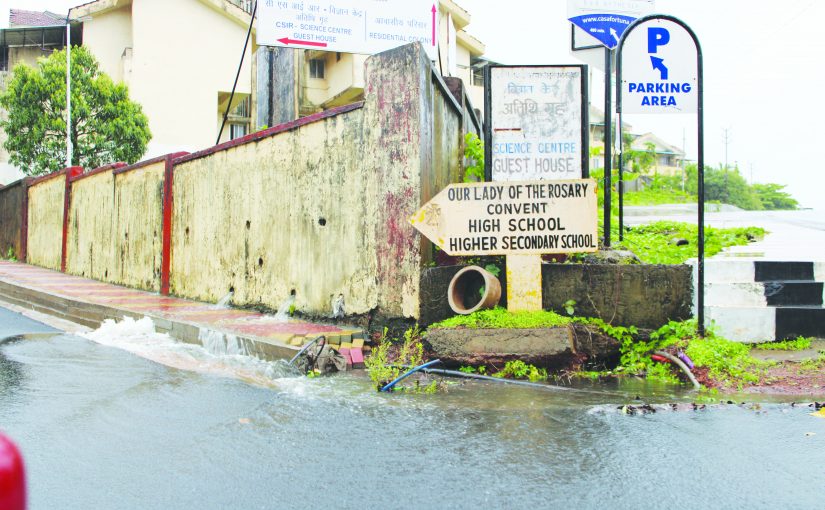 DONA PAULA blues: Dona Paula is one of the envied, upmarket residential areas of capital city Panjim. But development here is being carried out along such ad hoc, arbitrary, illegal lines that it is losing its charm. With no proper planned infrastructure along with drainage systems in place, the moment the monsoon rains arrive the streets turn into dangerous rivers making life a nightmare for seniors and other residents here. ( See letter, pic by Stephan Dias)

As we enter the 75 th year of Goa Revolution Movement I urge Chief Minister of Goa to ensure that all demands of freedom Fighters and their families including government jobs are fulfilled within this year. Democratic protests is constitutional right, suppressing peoples voice will lead to revolt. Most unfortunate I see midnight arrest of Congress Vice-Pre iden Sankalp; Amonkar at Vasco for raising peoples voice. Government must restrain from dictatorial actions and show sensitivity towards peoples’ problems.
–Digambar Kamat, former Chief Minister of Goa, as shared on Facebook

A LIGHTER EARTH?
THE burning of coal in power plants, petrol and diesel in vehicles, fission of uranium, plutonium and thorium in nuclear power plants, use of calcined petroleum coke in aluminium smelters and steel blast furnaces, use of other fuels in industry, have all produced energy for consumption and therefore, these very uses have resulted in production of energy by burning of these fuels. This has definitely made the earth lighter with the passage of time since the Industrial Revolution.
Huge quantities of these fuels have rendered the earth lose mass and become lighter. Due to asymmetrical oil exploration, coal mining and use of raw petroleum coke, the axis of the earth could also have tilted with time. This difference could be calculated if measurements by satellites in space can account for the loss of weight of the earth and the tilting of its axis caused by magnetic changes in the earth’s crust and its core. Matter cannot be created from nothing and matter has to be consumed in generation of power and energy by burning into gases.
Thus, it is beyond doubt that the earth is becoming lighter and the earth’s axis is tilting.
–Elvidio Miranda, Margao

online classes
Irony. Villagers want to lockdown to save lives. Villagers do not want online classes which also saves lives. Government forces villagers not to lockdown which endangers them. Government agrees to stop online classes further endangering villagers.
Why? Villagers do not trust the government to do right in any matter. Government trades with villagers: they opposed lockdown to safeguard businessmen and then agreed to stop online classes as a pacifier. We are looking at problems in isolation instead of at the full picture
First: Declare objectives and work to the same. Objective: Stop Covid-19 spread. Result: Lives will be saved, pressure on beds, oxygen, ventilators will be reduced. Loss of man hours will be reduced.
Villagers must realise that holding classroom teaching not only endangers their lives but increases the spread till we have no beds! Recall what is happening in Mangor Hill with just 2,000 population. Imagine if such a thing happens in a village? Do you seriously want that? The most dreaded part of the coronavirus is the ease with which it spreads.
Address villagers fears for online classes. Imagine if one member in a family tests positive. First, they will miss classes, parents work. If hospitalised, then someone or the other will have to visit the place daily. They will have to pay for tests and treatment. Then imagine if more members contact the same. We as yet do not know if a treated person will contact again or not. Imagine when beds are not available?
Poor connectivity for internet. Service providers want to set up towers right in the midst of population. Why? Because in Goa, today there are all kinds of thieves including those who steal cigarettes. If towers are placed at perimeters away from the populace they will have to employ a security guard. Even then their batteries, UPS and other electronics is not safe. So they harp on towers on peoples’ home terraces to guard their equipment.
People with more than one child cannot afford more smart phones. Government must subsidise this. Frequent power failures will not affect the mobile phones which have at least 8-hour charge. Problem is their favoured mobile towers do not all have fully charged batteries. Correct this. For proper range get all providers to install antennas/ repeaters near homes who have less coverage. Alternatively, students from such places can be called to school: They will be few and manageable. We must stay committed.
—R Fernandes, Margao
NIO COMPOUND WALL COLLAPSE
The NIO colony wall has collapsed due to the heavy rains on June 18, 2020 (take a look at the photographs here).
Just a couple of days back I had informed the NIO people authorities through our pensioners WhatsApp ‘Veterans’ group with a photograph of the at-that-time intact wall which is also attached here.
I expected some repair work to be done to this wall as Taleigao Panchayat blocked the passage of drain water here. Water is draining through small holes all the time and the major original one made by earlier Civil Engineers is blocked recently by the Panchayat. Drain water was flowing through the canal which was available before the bus stand project started coming up.
We local residents have objected to this project but somehow it is going on with the help of vested political interests with the support of the Taleigao Panchayat and perhaps also MLA of Taleigao. The ill-planned blockage is the reason for this wall collapse. I got to know about the collapse immediately thanks to my neighbour Nelson Cabral. I took the photographs and first thing I informed Dr Kalpana at the NIO colony dispensary and asked her to inform our Director NIO to depute civil engineers to this site to verify the broken soak pit of the septic tank which is near the collapsing wall, to get it repaired and modify the plan so that no overflow is passed on the roadside in the future.
The matter is most urgent because of the foul smelling water passing on the roadside towards Nelson Cabral’s place and adjacent Bay View Road where I am residing. Our High Court has very rightly rapped the Corporation of City of Panaji (CCP) for highhandedly having converted the Campal Parade ground into a garbage dump. Part of that waste has been now dumped at the very entrance of Ribandar. The inaction by the Goa State Pollution Control Board on this gross violation of law is also questionable.
–Stephen Dias, Dona Paula

Agriculture in Taleigao
With reference to the article in your issue (Goan Observer, June 13, 2020) I can provide you with some more information. Taleigao has roughly around 90 acres of agriculture low lying paddy fields, most of the fields are inundated with little rain and remains flooded as flow of water is very slow due to choking of St Inez Creek. Also after the construction of new broad roads the traditional waterways are distributed and new concrete projects have impacted the fields negatively.
Farmers who want to cultivate are discouraged due to this menace and this has been happening for the last 20 years. Politicians have not taken keen interest in rejuvenating the creek and basic necessities are neglected. It is a clear indication that local politicians are also real estate agents and want agricultural land to be destroyed. And then, they can convert fields into settlement zones to do concretization.
The Communidade of Taleigao filed a writ petition a year back regarding Taleigao ODP 2028 which is notified, this ODP is prepared by a politician without any in depth study to cater to present and future generations, but to cater to builders and politicians to make fast wealth.
The Taleigao communidade has prayed to scrap a fraudulent ODP and make fresh plans taking all stakeholders into confidence. For example, on the ODP Panchayat Ghar is marked next to community hall, indoor stadium near the market, and playground near St Michael School and several roads zigzagging all in paddy fields.
All these things are not required. We have indoor stadium just 1.5 km away, we also have huge Dr Remigia playground just 400 meters away and also a decent Taleigao Panchayat office. The High Court has given an interim stay on ODP in the month of February 2020 but the greedy souls taking advantage of lockdown with help of bureacrats are doing a lot of illegal activities, these guys should be brought to book.
–Xavier Almeida, Taleigao