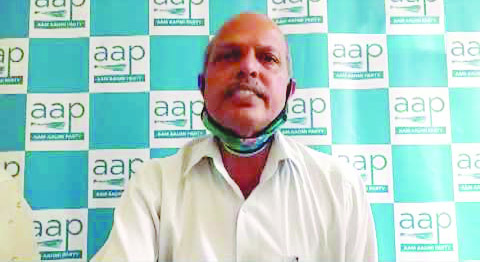 THE Aam Aadmi Party in Goa on Thursday, July 2, 2020, appealed to Chief Minister Pramod Sawant to apply the same yardstick as was applied to the returning seafarers and get quarantined along with MLAs in the wake of reports that a former Congress turned BJP MLA was found to be Covid-19 positive. AAP General Secretary Pradeep Padgaonkar has raised some important questions about the safety of people who must have interacted with the MLAs while the CM is flip-flopping about community transmission phase is beyond the understanding of the common man.
He appealed to Sawant to declare the names of all MLAs who were in the company of MLA Clafacio who met him after a show cause notice of disqualification was served on him by the speaker. “The Prime Minister has said that carelessness is rising and Goa is no different as has been shown by the CM and his ministers at the inauguration of the Dabolim airport flyover. The CM and MLAs are now suspects for Covid-19. Hence, for the safety of the general public, it is advisable to quarantine them at least for seven days under observation,” said Padgaonkar.
In the meanwhile observe several AAP representatives, panic is spreading faster than the disease itself and the government is doing nothing to arrest this. Private medical institutions must be roped in to supplement government efforts which are inadequate in meeting the growing need for vital healthcare, “Create sufficient bed capacities with oxygen and ventilators in anticipation instead of last-minute haste in finding beds,” advised Padgaonkar.