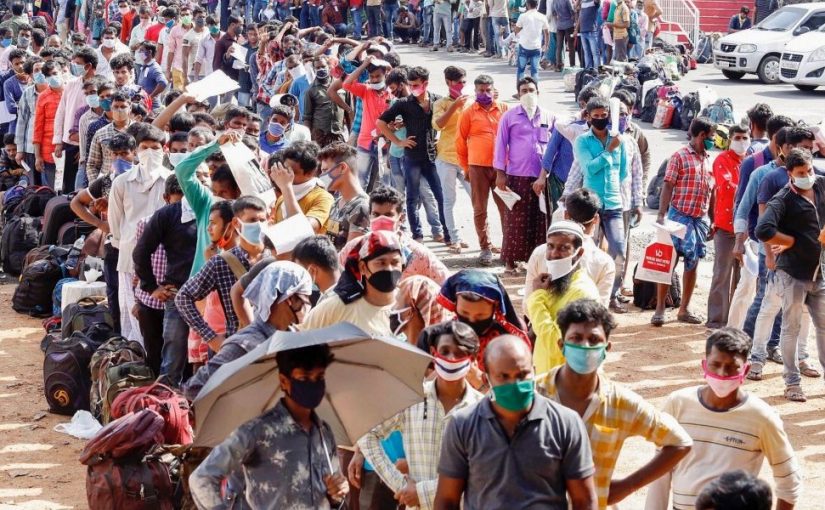 Migrant workers, citizens of India…bedrock of country’s development and progress story. But they are mostly exploited, ignored, neglected, bypassed, overlooked or taken for granted as we learned in recent Covid-19 lockdowns when employed and broke all they wanted to do was return to their home states!

First and foremost migrant workers, casual labor which migrates to other places in search of work and income, who do various skilled and unskilled jobs on daily wages, are Indian citizens. And not outsiders as many well-to-do eminently settled employers and citizens in big cities tend to think…those who come make a work load lighter for them certainly deserve to be treated with qualitatively better respect both by State and Central governments and employers.

WE have recently been witnessing a most horrific tragedy in our country’s history. The most visible part of the tragedy is the movement of casual migrant workers back to their home states. It is estimated that as a consequence of the Covid19 lockdown an estimated 114 million job have been lost. Comprising 91 million daily wage earners and 17 million salary earners who have been laid off across 271,000 factories and 65-70 million small and micro enterprises that have come to a grinding halt.
We need to ask WHO is a migrant worker? Why is he/she treated as an outsider instead of as a citizen of his/her country with full rights guaranteed under the Constitution, the law and international labor standards?
There is a need to intervene in the situation to ensure that migrants are assured of their right to livelihood both in their original home state and at the place where they migrate. International agencies have been developing the concept of safe migration – we need to look at the concept more closely in our own context:

THERE is no reliable data on the number of Indians migrants working abroad or within the country. However, even with the limited data the statistics show the scale of the problem .
According to the International Labor Organization (ILO) India is a major country of origin and transit, as well as a popular destination, for workers across international borders. As per official figures, there are over 30 million Indians overseas, with over nine million of the Indian diaspora concentrated in the GCC region (now known as the Cooperation Council for the Arab States of the Gulf). Over 90% of Indian migrant workers, most of whom are low- and semi-skilled workers, work in the Gulf region and South-East Asia. Analysis of international migration trends in India is inhibited by the limited official data available. Data is available only for workers migrating on Emigration Check Required (ECR) passports and to one of the 18 ECR countries.
The International Organization of Migrants calculates that there are 271.6 million migrants all over the world as of 2019.The International Organization of Migrants (IOM) established in 1951, IOM is the leading inter-governmental organization in the field of migration and works closely with governmental, intergovernmental and non-governmental partners. According to the IOM “migrant” is “An umbrella term, not defined under international law, reflecting the common lay understanding of a person who moves away from his or her place of usual residence, whether within a country or across an international border, temporarily or permanently, and for a variety of reasons. The term includes a number of well-defined legal categories of people, such as migrant workers; persons whose particular types of movements are legally-defined, such as smuggled migrants; as well as those whose status or means of movement are not specifically defined under international law, such as international students.”

THE Census defines a migrant as a person who “is enumerated in census at a different place than his/her place of birth, she/he is considered a migrant.”
Millions of men and women migrate from their homes in rural India to towns and cities in search of work especially during certain seasons. It is estimated that 120 million people or more migrate from rural areas to urban labor markets, industries and farms.
The major migration corridors in India along which large scale movement of workers takes place are shown in the map below. Some regions like UP and Bihar have been known for rural migration for decades — however newer corridors like Odisha, Madhya Pradesh, Rajasthan and recently even the North East have become major sending regions of manual labor.
Among the biggest employers of migrant workers is the construction sector (40 million), domestic work (20 million), textile (11 million), brick kiln work (10 million), transportation, mines & quarries and agriculture. The internal migration almost doubled during 20 years—from 220 million in 1991 to 454 million in 2011.
In addition there are according to Census 2011 around 5.5 million people in India had reported their last residence outside the country which is roughly 0.44 per cent of its total population. Of these, 2.3 million (42 per cent) came from Bangladesh and 0.7 million (12.7 per cent) from Pakistan. The number of immigrants from Afghanistan was low at 6,596.
These numbers show that roughly 55 per cent of the immigrant population, who recorded their last residence outside India, belonged to Pakistan and Bangladesh alone. The Census data gives details about the time period these immigrants have been staying in India, thus helping us decipher as to when they arrived here. The major immigrant flows have been recorded during and after Partition and the 1971 Bangladesh liberation war.
We will discuss the problem of illegal migrants in India below.

IT may seem a little redundant to speak of legal protection of migrant workers in the context of the mass exodus of migrant workers during the pandemic but it is precisely why we need to know the laws that are in place and ask why despite these the migrants had no way of enforcing their legal and constitutional rights.
Since its inception the International Labor Organization has adopted 181 legally binding conventions and 188 recommendations aimed at improving labor standards across the globe. There are eight core labor standards. There are four categories such as: i) Right to freedom of Association and collective bargaining ii) Elimination of forced labor iii) Elimination of child labor iv) Elimination of discrimination in matter of occupation and wages.
Under the Indian Constitution the migrant worker who is a citizen of India has certain fundamental rights under Part III of the Constitution of India.
In addition there are labor laws which protect all workers such as the minimum wages act and there are labor courts, labor commissioners and a system in place for the legal protection of all workers.
In addition there is the Inter-State Migrant Workmen (Regulation of Employment and Condition of Service ) Act, 1979, more than 40 years ago.
A UNICEF report in 2012 noted that the Act needs to be revised:
Revise the Inter-State Migrant Workmen (Regulation of Employment and Conditions of Service) Act (1979) including the following gaps:
– The Act applies to only migrants crossing state boundaries and, therefore, a large section of migrants are excluded from its ambit.
– It does not monitor unregistered contractors and establishments.
– It remains silent on provision for crèches, education centers for children or mobile medical units for the laborers.
– It articulates no guidelines for inter-state cooperation.
– It covers only regulation of employment and conditions of service of migrants and does not address access to social protection of migrants, their right to the city and the special vulnerabilities of children and women migrants.
– Important provisions of the Act such as minimum wages, displacement allowance, medical facilities and protective clothing remain unenforced.

(i) Social Protection
States must (i) establish the Unorganised Workers Social Security Boards; (ii) institute simple and effective modes for workers to register, including self-registration processes, e.g., through mobile SMS; and (iii) ensure that the digitisation of registration records was leveraged to effectuate inter-State portability of protection and benefits.

(ii) Self-registration
Migrants should be provided with portable health care and basic social protection through a self-registration process delinked from employment status. The level of benefits could be supplemented by the worker or State governments with additional payments.

(iii) Food security
One of the major benefits that migrants, especially short-term migrants or migrants who move without their household, lose is access to the public distribution system (PDS). This is a major lacuna, given the rights conferred under the National Food Security Act 2013. The digitisation of beneficiary lists and/or in some instances their linkage with Aadhaar permits the two actions necessary for portability of PDS benefits, that is (a) the modification of the benefit to permit the delinking of individuals from households and (b) the portability of the benefit across the fair price shop system (or alternative methods, if used).

(iv) Health
The rudiments of a portable architecture for the provision of healthcare are in place with the portability of RSBY (Rashtriya Swasthya Bima Yojana) and ESI (Employees’ State Insurance). The focus can be on covering contract workers and even unorganised workers under ESI, and the proposed use of portability to provide the benefits under UWSSA (Unorganised Workers’ Social Security). However, there is still a large gap in implementation, the level of basic benefits and the ability of workers to improve these benefits with supplementary payments.
The working group also recommended that the Integrated Child Development Services–Anganwadi (ICDS-AW) and auxiliary nurse midwives (ANMs)—be advised to expand their outreach to include migrant women and children in the scheme.

(v)Education
The working group also recommended that Ministry of Human Resource Development encourage States to include migrant children in the annual work plans of SSA (Sarva Shiksha Abhiyan), such as under the Education Guarantee and Alternative and Innovative Education schemes.
This could include the establishment of residential facilities as well as providing support to a caregiver chosen by the family, as currently practiced in some States. In doing so, it is imperative to ensure adequate child protection, basic services, and caregiver-to-child ratios.

(vii) Financial inclusion
The working group recommended that the Ministry of Communications re-examine the Department of Posts’ electronic money order product, benchmark it to private (informal) providers in terms of cost and time for the delivery so that it could be a competitive option for migrant remittance transfers.

SO far the courts, labor commissioners and some NGOs have been monitoring the contractors and placement agencies. This has to be done at the local level. But with growing privatization the contractors are going to become more powerful.

The labor legislation has become watered down; the courts ineffective and trade union movement weakened. NGOs seldom confront the state and cannot be effective in limiting the power of the contractors but they may be able to check the abuse of migrants by placement agencies with the help of the police.
There is a need for a public awareness campaign which could be helpful in making people more sensitive to the rights of migrant workers.

(This FAQ observations have been written by lawyer and writer Nandita Haksar. There is no copyright and the information provided may be used freely by whosoever is interested.)