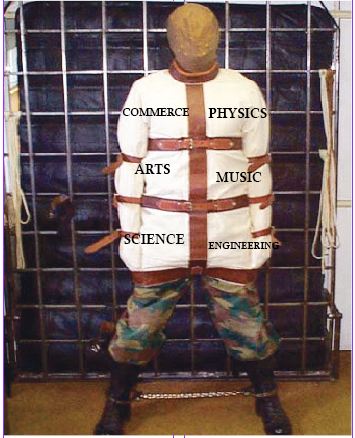 RIGID: The present education system is a choice between hell and physics, chemistry and maths. It does not allow you to combine maths with music or geography with philosophy

TO begin with perhaps I should describe what has been happening to Indian students. Every sailor has to wear a life jacket which inflates if by accident he falls into the water. Similarly, our students are put into tight compartment straitjackets. Now right from the kindergarten level it is the Department of Education which will decide on subjects a child will study. The most restricted provision in the straitjacket called the syllabus is the controversial medium of instruction.
For generations we have followed the three-language formulae whereby children are compelled by their mother tongue, regional language and English. Now you have a fourth option, you may study Sanskrit as well, as if all kids when they grow up are going to crop out their hair and become bhatji! The other problem with the new education policy is that unlike in the past children will be compelled to learn their mother tongue up to the 8th standard and perhaps even at school finals.
I recall that when I was studying in school in Bengaluru I had to study Kannada right up to the SSC and if I failed I could not go to Higher Secondary or pre-University course as it was then called.

BUT there are many commendable features in the new education policy. The anganwadi idea is now buried. In any case most parents used to start sending their naughty children to school right from the third standard even though the official age for Std 1 was five years. The 10 x 2 structure at the school level has been replaced into a completely new scheme corresponding with age groups 3-8, 8-11, 11-14 and 14-18, respectively. This affectively means all the aunties who run kindergarten garden variety schools in their residences and rich institutions which have franchisers like Zee are out of business.
To cover the four foundation stages followed by kindergarten there will be Std 1 and 2 from age of three to six years and that is the first stage of education structure. From class 3 to 5 it will be the preparatory stage, followed by the earlier middle school which now comprises Std 6 to 8 instead of earlier 5 to 8.
The secondary stage will now be a hop, jump and leap covering standards from Std 9 to 12. This effectively means that students will now be tortured only once and not twice between standard 9 and 12. The Std 10 exam which is to be held by the State Education Boards has been abolished and students will directly skip to Std 12 which will be the entry stage for higher education.
Since we live in Modi Raj which believes that if you light candles and bang vessels in the verandah, coronavirus will be driven away, not surprisingly Sanskrit will be offered at all levels of primary and secondary education as an important enriching option for students, including as an option for a three-language formula. Which could imply that you may drop Marathi and Konkani in favour of Sanskrit! The other important change is that there will be no centralised syllabus for all states. Every State will constitute its own curriculam and prepare text books incorporating the State priorities and material.

WHILE it is defiantly desirable that students should be familiar with local history and culture, it could create problems. The question which will arise is if Konkani and Marathi education and the battle for Opinion Poll should feature in the text books of Maharastra and Goa? For obvious reasons the way these are presented will not only be different but even antagonistic.
Similarly, given the fact that kings in one State are considered villains in another it would be better for national integration that at least in areas of history, culture and environment there should be a common syllabus. To my mind the linguistic decision of the State itself is a mistake and permitting individual States to prepare their own syllabus would be problematic. Children of course will welcome the proposed provision to reduce the weight of their school bags. It is proposed that for ten days in a year students will engage in outdoor activities which will not require a schoolbag.
The most revolutionary change in the new education policy is its flexibility. This is the secret of superior educational standards in countries abroad. At present till the new education policy comes into force, students will have to stick to the group of subjects which are namely physics, chemistry, mathematics, if they want to do engineering and physics, biology if you want to do medicine. It is assumed that if you have opted for history and economics you cannot do maths.

EVEN though economics is becoming more and more mathematical and in fact very popular at least with TV watchers. Ever since Covid-19 we have been seeing graphs and charts and all talk is of flattening the curve and all this is part of economic modelling and statistics. The Covid-19 model builders calculate how many days it takes for the number of cases to double in the last ten days and project whether it will take less time for the cases doubling in the next phase. This is important from the point of view of not only containing the contagion but in terms of infrastructure for treating it.
It may be recalled that there was a panic when the IIT-ian Arvind Kejriwal projected that Delhi would require three lakh Covid-19 beds by end-July. Fortunately for him the curve flattened out and dipped the number of beds needed to 30,000. Conversely, in Goa with number of cases going up by 300 per day and with a population of just 15 lakhs, you may soon have to use Dr Shyama Mukerjee Stadium as a Covid-19 hospital. Which is why not only New Delhi which set the precedent but even Goa has given patients the option of home isolation, which means that they can be treated at home. You don’t even need a ventilator, you may only need a more practical oxygen meter which costs `60,000 and is for easy home use to check oxygen levels of the patient.
The most revolutionary change is that you can mix and match any combination of subjects. Just as every pretty woman keeps experimenting to see which blouse matches with saree or which top with skirt. Similarly in education you may now combine mathematics and music. You can read philosophy and organic chemistry. You can read geography and philosophy. There are no modules in the new economic policy. As in the rest of the world the NEP follows a semester system. Your marks depend on how well you do in each semester and this will focus only on one subject. This allows scope for interdisciplinary education. Which is why you find historians becoming astronomers in the United States!
Curiously all the Indian chairman and managing directors of the big technology companies like Facebook and Google are not science and engineering students but students of art. The NEP seems to have finally accepted that the world is round, that “duniya gol hai.” That you should follow your heart and choose to learn whatever subject your heart dictates. Forget about choosing a particular subject because it is high scoring, in contrast to some other subject which does not fetch as much marks. Curiously, a lot of students of Std 10 and Std 12 opt for Sanskrit because like maths you can get 100 out of 100 marks.