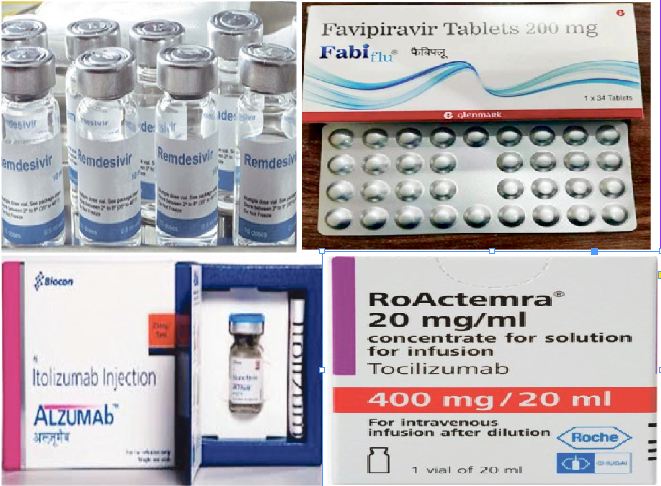 FIGHT: A number of drugs have been approved by the Food & Drugs Administration but most of them are aimed at boosting immunity and keeping blood pressure under control

Highlighting some of the most popular drugs which are being used all over the world to fight Covid-19. Unfortunately, many of them are not available at the Covid-19 ESI hospital in Margao, perhaps because they are too expensive……

The Central Drugs Standard Control Organisation (CDSCO) has approved five drugs in the last month for COVID-19 treatment – two antiviral: Remdesivir and Favipiravir – and three for easing the symptoms: Dexamethasone, Tocilizumab and Itolizumab. These drugs’ use is bound to birth complications considering there are doubts about the evidence the government has furnished – or not – to approve their use.
Remdesivir costs around 5,000 per vial with a total treatment cost in the range of35,000-50,000. Favipiravir costs 103 per 200 mg tablet; the total treatment cost ranges from12,000 to 15,000. A vial of Itolizumab costs around8,000 and the total treatment cost could be between 32,000 and50,000. Tocilizumab costs 40,000 to50,000 per vial.

Remdesivir was approved for clinical use for both children and adults by the CDSCO as an injection on June 1, amid controversies surrounding its efficacy. This drug is manufactured by Gilead Sciences Inc. The first randomised double-blind study showed no statistically significant treatment efficacy in severe COVID-19 patients. Gilead’s own study reported that no fewer people died when on the drug. However, while the study also reported patients on Remdesivir recovered four days earlier on average, independent experts aren’t convinced.
A press release by the US National Institute of Arthritis and Infectious Disease (NIAID), the study’s sponsor, nonetheless said hospitalised patients with COVID-19 recovered faster when they were on Remdesivir compared to placebo. There was also a controversy surrounding the changing of end points of the study, to get a favourable outcome. Gilead’s quest to secure approval for the drug were also shadowed by reports of lobbying to influence the FDA and other authorities.
A study published on May 22 – sponsored by NIAID – showed that Remdesivir didn’t affect the recovery of Asians, a result that never entered the media spotlight. On July 3, an independent expert wrote in a blog post for the British Medical Journal that the US government had purchased Remdesivir doses worth $1.5 billion because, he argued, the drug’s effects could actually be “exaggerated, embellished with unreliable effect measures”.

Favipiravir is an oral drug accepted by the CDSCO to treat patients with mild to moderate COVID-19 disease on June 19. Favipiravir is manufactured and marketed by Glenmark Pharmaceuticals in India. It’s is a generic version of Avigan, an emergency flu medication developed by Toyama Chemical Co. – a subsidiary of Fujifilm – in 2014. It entered the spotlight after Zhang Xinmin, director of China’s National Centre of Biotechnology Development, announced in March that Avigan was effective against COVID-19 based on two clinical trials.
Following this, on March 31, Fujifilm Corp. announced Avigan would undergo phase 3 clinical trials and phase 2 trials in the US by April 9. By April 28, Avigan was being distributed in 38 countries to treat patients to evaluate the drug’s effects. Later, Glenmark Pharma received its first approval from the Drug Controller General of India (DCGI) for clinical trials of the generic version of Avigan.
Glenmark officially announced the approval for phase 3 clinical trials on May 12, with 150 patients with mild to moderate COVID-19. On May 26 Glenmark said it would be starting phase 3 clinical trials with two antiviral drugs, Favipiravir and Umifenovir, for combined efficacy, and that it had recruited 30 patients out of the 150 to be treated with Favipiravir alone. This triggered several questions.
On May 20, Daike Samura of Jichi Medical University, who conducted the trials in Japan, said there was no data that showed Avigan was efficacious against COVID-19. However, the CDSCO went ahead anyway and approved it for use in India by June 19. According to more recent reports by Fujita Health University, Avigan has failed to show any ability to treat COVID-19. Japan’s Prime Minister Shinzo Abe also pushed for the drug’s approval but the trial results simply didn’t hold up.
Meanwhile, Fujifilm had announced a partnership with Dr Reddy’s in India, licensing the latter for producing Avigan, and not the generic Favipiravir. Per this agreement, Dr Reddy’s will be able to conduct clinical trials in India and the Middle East, possibly due to a dearth in the number of patients in Japan and regulatory hurdles.

DCGI recently approved Itolizumab to treat moderate to severe COVID-19 infections, announced in a press release by Biocon on July 11. It was earlier marketed as ALZUMAb, to treat moderate to severe chronic psoriasis. ALZUMAb was first produced by Centre of Immunology at Cuba in 2014. This is an immune modulating drug that can decrease the chances of a cytokine storm. Biocon is hopeful for the same reason that Itolizumab can help patients with severe COVID-19 in India.
Clinical trials for Itolizumab were conducted with just 30 COVID-19 patients at four sites in India. DCGI approved Itolizumab based on the trials’ outcomes. Thirty is a very small number of participants for a phase 2 clinical trial – too small to lend itself to a statistically significant outcome. The trial was also open-label without, which means there is good chance that the results were biased towards more favourable outcomes. In addition, other studies have also reported side effects of this drug, including respiratory and urinary tract infections. COVID-19 patients are already prone to secondary bacterial infections, and treatment with Itolizumab may exacerbate this risk.

Tocilizumab is expected to decrease the mortality of severe COVID-19 patients. Preprint papers uploaded to medRxiv show it reduces mortality by only 3.8% – which becomes even less impressive when side effects listed by manufacturer are accounted for. They include risk of reactivation of tuberculosis along with other latent and bacterial, fungal and viral infections.
Hence these treatment recommendations of immunomodulatory drugs without proper, large-scale randomised, controlled clinical trials will always be the case of risks outweighing the benefits.