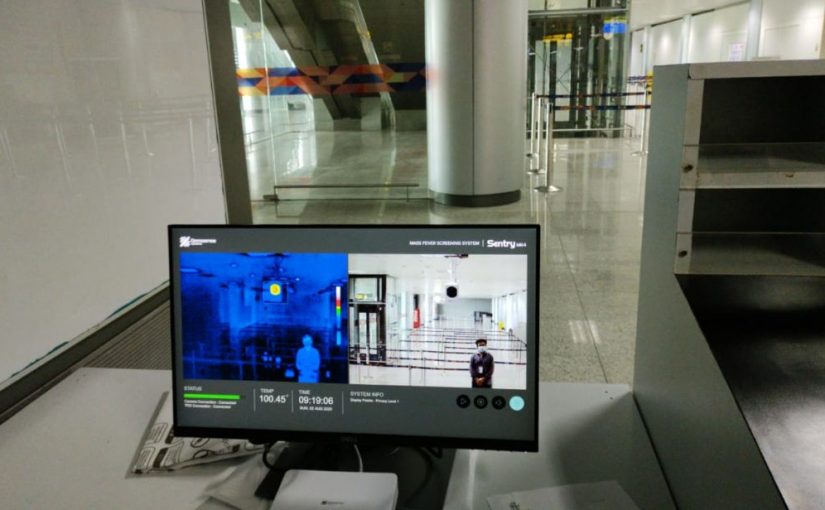 The fight against Covid-19 continues with the help of sensitive technology! The Hyderabad International Airport is the first to receive a UNICEF-funded mass fever screening system from the government of India. The new thermal scanner will be used by the Airport Health officials of MoH&FW (Ministry of Health & Family Welfare). The equipment is mounted on the ceiling and is capable of scanning, detecting and tracking febrile persons, with elevated skin temperature. Needless to say the new thermal scanner imparts more facilitation and control to the Hyderabad Airport Health Organization, along with the existing thermal scanners vis-à-vis international arrivals. It is hoped the facility will make the task of health officials at the airport around clock a little more easy. The airport handled close to 40,000 international arrivals passengers from May 2020 till date. From the sound of it this airport is the most super sanitized airport of them all in India!

ILLEGAL mining in Goa continued unabated and it is thanks only to the pushing and prodding of the Goa Foundation that some mining dues are going to be recovered. It is heartening to know that the State will recover Rs3.431 crore mining dues from mining companies in two lots of Rs1,508 crore and Rs1,922 crore over four months. This is a good beginning. However, what is most alarming is that the biggest booty of mining illegalities amounting to Rs65,058 crore owed by the mining companies due to illegalities between the years 2007-2012 may not be recovered and failing which mining activities will not resume in Goa.
If this large amount is recovered then deserving mining dependents can be allocated about 15% of this owed amount as subsistence allowance during the pendency of cessation of mining activities in the State. The Supreme court should not allow it at least till the amount of Rs 35,000 crore as calculated by the Justice M Shah commission is not recovered.
It may be emphasized that mining is a one-time activity and hence conduct of this business should be strictly monitored.
—Stephen Dias, Dona Paula

INDEPENDENCE DAY
Despite the Secretariat having moved to Porvorim, the Independence Day State flag hoisting function continues in front of the Old Secretariat in Panaji.
In public interest, the Government should hold the Independence Day flag-hoisting function at Porvorim instead of inconveniencing the public by holding it at Panaji. On every Independence Day the road opposite the Old Secretariat in Panaji is closed for traffic and unnecessary inconvenience is caused to the public. It is most improper to close a very busy road when there is an alternative and far more appropriate venue.
Along with the Independence Day flag hoisting, the Republic and Liberation Day functions should also be held at the Porvorim. It would be good for security reasons too. Besides, in every State such functions are always held at the Government Secretariat. Why should it be any different in Goa? The National flag is a symbol of the nation’s and state’s pride and must be respectfully hoisted with all those present standing to attention and facing the flag and those in uniform rendering the appropriate salute. Surely, the best place to provide the respect on behalf of the people of the state must be the Secretariat which represents the office of state that administers the affairs of the state on behalf of the people.
The government should also contemplate having only one State function in a place of honour and the seat of Government where the significance of the day should be honoured, instead of making a mockery of the auspicious days by having functions all over the place. The Goa Government should also ensure that the expenditure on such and all other government functions is kept to the bare minimum. It is hoped that Chief Minister Pramod Sawant will look into the issue.
May this Independence Day function be held at the Secretariat in Porvorim to ensure that the public in Panaji are not inconvenienced and because due respect must be provided to our national flag on behalf of all the people in a place that houses the representatives and Government of the people.
—Adv Aires Rodrigues, Ribandar

EXERCISE TO BEAT CORONAVIRUS!
COVID-19 has probably made physical training experts to popularize the virtues of free hand exercising as well as open air exercising. Some world class physical training instructors have now come in open agreement that free hand exercises like push-ups, pull-ups and sit-ups being the best form of staying in shape, especially if they are done in open areas where there is ample fresh air and particularly effective and more beneficial if it done in an environment where a large number of trees are planted.
Younger people have to exercise strenuously once a day preferably in the early morning, while with the advent of age your exercising may be in shorter spells of 10 to 20 minutes each but all of this in open air like a garden or jogger’s park. Village dwellers have an advantage over urban dwellers since rural areas are mostly surrounded by trees.
Also for women and girls, skipping and long walks as well as jogging, are recommended again in open air spaces. Gymnasiums are mostly recommended mainly for body builders. As far as push-ups, pull-ups and sit-ups are concerned they can be done in accordance with your body weight. Another suggestion is that walking up against gravity is a much better mode of exercising ourselves.
However, all these exercises have only been recommended without wearing face masks, so in a city, residents can walk, jog or exercise with free hands in the morning and wherever social distancing is required, at least three meters can be kept between exercisers so as to do away with masks. Try these easy and inexpensive recommendations to keep yourselves immune to the coronavirus!
—Elvidio Miranda, Panaji

DIVISIVE RAM JANBHOOMI MOVEMENT?
PRIME Minister Narendra Modi whilst laying the foundation stone for the Ram temple recently said peoples’ wait for centuries has ended. As Lord Ram’s birthplace has been liberated from numerous attempts to eradicate its existence and now India is writing a glorious chapter in Ayodhya. He has also drawn a parallel between the campaign for construction of the temple at Ayodhya with the struggle for India’s independence.
Well, there are thousands of temples which are already dedicated to Lord Ram in and around Ayodhya. Now, how can Mr Modi say that Lord Ram’s birth place has been liberated with the laying of the foundation stone for the construction of this particular temple at Ayodhya! Doesn’t Lord Ram have the whole city of Ayodhya dedicated to him? What senseless and nonsense statements the PM is issuing, you’d think Lord Ram was a prisoner or held hostage by certain communities for centuries and just waiting/eyeing this particular spot or disputed site to permanently reside in!
Secondly, how can PM compare or equate this most divisive Ram Jamnabhoomi movement actually started by a few Hindu religious heads, but later hijacked by BJP leaders in collaboration with right-wing organizations for political survival and subsequently resulting in the demolition of Babri Masid at the disputed site, leading to a lot of bloodshed along with the struggle for India’s independence?
Was India’s independence fought to prove the supremacy of a particular religion in our country by dividing Indians along religious lines? The answer is a big NO — India’s fight for independence was fought unitedly by people of all faith to liberate India from the British and uphold the right to freedom of every Indian.
So BJP leaders should stop misguiding people by deliberately promoting the supremacy of one religion, digging into a fictitious mythological past for their own political survival. Instead try to bring lasting unity by giving more importance for to today’s day to day tragedies unfolding, keep religion out of politics.
I hope with the construction of the Ram temple at Ayodhya communal harmony will finally be allowed to return permanently throughout India. And no more new claims over religious places of minorities based on personal beliefs or faith of known communal elements be entertained by any political party in the name of betterment of this country and its people. In the name of pseudo-liberation and fake cultural nationalism of India! Jai Hind.
—Jerry Fernandes, Saligao