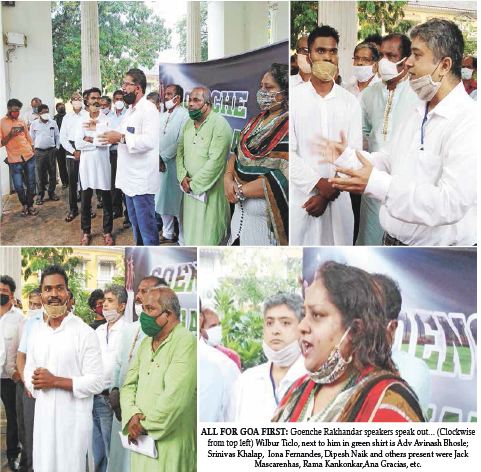 IT was raining mercilessly this Independence Day in Goa but here were these 100 odd Goans of a newly formed group called Goenche Rakhandar calling for renewed efforts to save Goa. Save Goa from a very khaas aadmi-based kind of exploitation, progress and development. They are determined to stop it because the general perception is that it is coming from outside Goa to destroy their humble village lives and livelihood. All in the name progress and development which they don’t understand. Whose progress and development? It doesn’t look if is for Goa or for Goans.
It was August 15 and yet another Independence Day out at the Azad Maidan in Panaji where led by Avinash Bhosle and Srinivas Khalap, Wilbur Ticlo, Jack Mascarenhas, Dipesh Naik, Rama Konkankar, Iona Fernandes, Ana Gracias and many more raised their voices in talk after talk recounting how they are becoming homeless in their own very own Goa, “They want our villages, they want our land!”
It’s a familiar cry for we have heard it the country over whereby mega government projects in the name of progress destroy an environment of clean air, clean water and food from the fields in exchange for large scale mindless urbanization whereby the quality of local people’s life spirals downward – because Indian governance suffers from a disease called mindless greed and stupidity! Or so it would seem.
So here were these articulate members of the newly formed Goenche Rakhandar all set to become warriors speaking on behalf of Mother Earth first. Said advocate Avinash Bhosle, “These villages and lands are where our ancestral places are giving us an identity and we are the rakhandar…” Thus, they have decided to call their group Goenche Rakhandar as they join other groups like theirs to fight the good fight of no progress and development at the expense of livelihoods, homes and environment.
Goa, Goenche Rakhandar members say, is their beloved state and it is being ruined by government dadagiri. The government is not concerned about upliftment of the economy or providing better infrastructure of public utilities, health, sanitation, but is now single-mindedly pursuing grand mega projects which will see the cutting down of thousands of trees, loss of forested water bodies, destruction of villages where humble livelihoods are lived in comparative peace – in exchange for what? The projects of industrialists from outside the state who fill the coffers of the Central government for exploiting Goa’s natural resources to death, who don’t know Goa, its people or its culture?
It is high time the government of Goa stood up for its own people and listened to their woes instead of ambitious politicians at the Centre who have their own agenda on how to sell the country in state after state down a road of no return. Is progress and development gifts for a few mercenaries but misery for the many?
Said an eloquent Dipesh Naik, “All this development of Goa is not for us!” Why must our leaders come from outside Goa, from Delhi? As if we have no leaders in Goa! The Goenche Rakhandar group is taking a keen interest in the shape politics is taking in Goa and intend uniting to work towards restoring basic rights and privileges to Goans first. Yet another member asked, Why don’t Goans stand up for their rights, where are the youth, isn’t this the future of young Goans we’re talking about?
If Wilbur Ticlo (convenor, Goenche Rakhandar) spoke about power to the people through the proper implementation of Panchayat rule and economic revival first protecting the environment, Iona Fernandes said the focus should be on women because “woman is the first rakhandar, we women are the real caretakers, we create the leaders…” Women too should pay attention to what is happening around them in Goa and take an interest in the just fight of then people.
Rakhandar Goenche would concentrate on regional freedom first and have drawn up a charter of aims and objectives. Working with other similar groups in Goa they hope to create an extended umbrella unity in endeavoring to create a politically vigilant and vibrant movement of people in Goa to prepare a more realistic political road map for a prosperous and a happy Goa. They plan to revitalize and rejuvenate agriculture, fishing, local economic resources, also promote music, tiatr, art and crafts of Goa, making the most of technology to generate gainful employment for the people of Goa.
Goa’s newest citizens’ group, Goenche Rakhandar, sang the national anthem, distributed sweets to media people and all who had turned up in the falling rain to listen and express solidarity with them, before dispersing on a positive note.