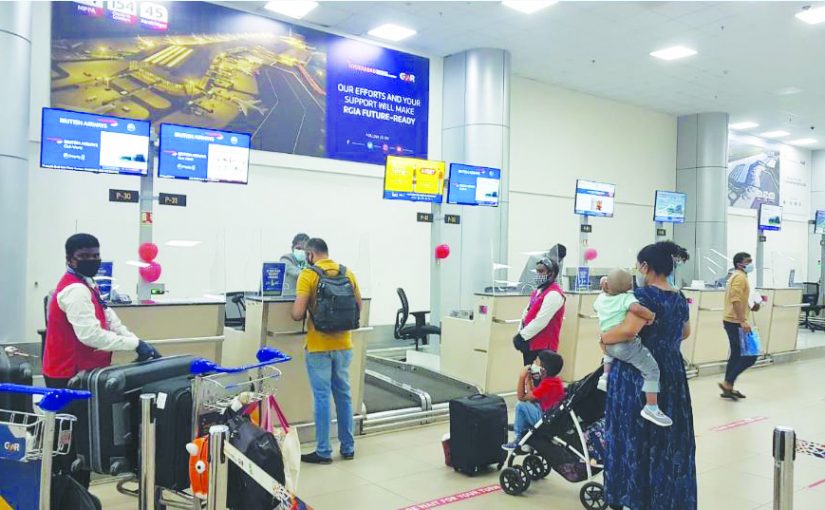 HYDERABAD INTERNATIONAL AIRPORT BUZZING ANEW: From the sound of it won’t be too long now before airports are buzzing. The GMR-led Hyderabad International Airport has resumed direct connection with the UK. Under Air Travel Bubbles an arrangement has been arrived between both governments that there would be four passenger flights of British Airways and all flights would strictly follow Covid-19 safety protocol. Hyderabad reconnected with London Heathrow from August 17, 2020.

WHY are we not consistent? Doctors, engineers, resort to tuitions to gain entry to such colleges. Why? All the hard work of reasoning to solve problems is done by the tuition master. He also provides solutions to frequently asked questions, even giving shortcuts.
In the current pandemic we have World Health Organisation collecting data and analyses work done across countries and forming solutions/SOPs/etc to be followed. Strangely, all the products of tuitions want to rely on their own reasoning rather than WHO! Should not we make a rider to all tuition products to forever give first preference to other masters?
On April 21, WHO came out with a publication: `Addressing human rights as key to the Covid- 19 Response.’ Besides addressing stigma and discrimination, violence against women, shortages of equipment and supplies, they address the issues of supporting vulnerable sections of the people, including prisoners. We saw the outbreak in Colvale Jail. They mention the support required by people with pre-existing health conditions.
Has our GHRC read this publication? They have been terribly silent to date. Are all the vulnerable sections of people in Goa being given due respect regarding their rights? Are human rights respected as per the WHO publication?
— R Fernandes, Margao

COVID-19 MINISTERS
CHIEF Minister Pramod Sawant has stated that the team of expert doctors who have flown all the way from Delhi to check AYUSH Minister Shripad Naik have also reviewed other COVID +ve MLAs. Why could the Goa government not request these doctors to also check other patients battling the virus at the COVID hospitals?
Is the life of the politicians worth more than that of the common man? Every COVID patient in the state has a right to get the best medical care. Will the Goa government fly in doctors from Delhi to examine our poor patients or is this privilege only for politicians? While cash rich politicians and their families get unlimited free medical care at private hospitals, the common man has to beg and borrow money against jewellery, property, hoping for patient to survive.
We all see how a financially strained government spent several crore on the medical treatment of former Chief Minister Manohar Parrikar when he was terminally ill. The irony is that even a day before his death while we all knew the factual position, Health Minister Vishwajit Rane had the audacity to mislead us that all parameters of Manohar Parrikar were fine!
The time has come for the government to ensure that the level of medical care is the same for every citizen. Not a paisa more a paisa less. We also seek radical improvement of health care in government hospitals. All the political parties need to come to a consensus on this. Even if there needs to be a public agitation towards ensuring this, so be it. Good Health care for all even the poorest of the poor should be out focused thrust. Equality for all is anyway in the Preamble of our Constitution of India.
— Aires Rodrigues, Ribandar

RESUME MINING?
PAST experiences indicate that mining activities in the State should not resume too soon. That is before the terms and conditions laid down by the Supreme Court are implemented in letter and spirit. The following conditions need to be focused on if mining is to be resumed: Have the Rs35,000 crore loss as unearthed by Justice M B Shah Commission in his investigation been recovered, though reportedly smaller amounts are being recovered in four months. This is not enough and hardly one-tenth of the total illegally lost amount.
Also, the new road map for the restoration of mining has not yet been conceived. A Mining Corporation has not yet been formed. A Permanent Fund is still to be made fully operational. A mining dividend of at least Rs1,000 each could be paid to all registered citizens of Goa who do not have State or Central government jobs, those who receive pension and who are allotted Griha Aadhaar and Dayanand Social Welfare Scheme.
Mining is a one-time activity and during the pendency of mining those who are not benefited should be covered by mining dividends. The idea is to cover everyone as beneficiaries of government sources of income.
In the absence of the above I don’t think the time is ripe for resumption of mining.
— Elvidio Miranda, Panaji
NO DOUBLE TRACKS PLEASE
AS one of the many concerned Goans raised and educated in Goa may we solicit every Goan’s intervention to halt and/or cancel the double tracking planned by way of development of Mollem forests
As the Commissioner of NRI I trust you must be aware that remittances from Goans working in different countries in different circumstances are coming in for their families, investments and savings of hard-earned money in billions of rupees and these benefit Goa and further benefit the entire country?
A nightmare for the people is not just double-tracking but the transportation of coal pollution adjacent to their homes, deteriorating environment and loss of quality of life. As your rank is equivalent to that of a member of Cabinet you may enjoy the prerogative of convincing the Chief Minister Pramod Sawant on what is not right or wrong about this project. It is unfair to back businessmen when voters are the ones who have voted for the 40 members of the government.
Even though POGO have been walked over we cannot continue to juice from sugarcane! Even though we of POGO are overseas our hearts belong to GOA. If not for the lack of proper jobs, competitive education, progress, etc, we could not invest and send remittances to Goa.
We would like to hear something positive from your office as people are disgusted with how Goa has been impregnated with satisfied entrepreneurs instead of satisfied voters. I look forward to positive news to help the quest of not only Goans overseas but also those in Goa. Happy Ganesh Chaturthi!
— Oscar C Lobo, Goa
SAVE CONGRESS PARTY
THE Congress interim president Sonia Gandhi has now appointed Jairam Ramesh as party’s chief whip in the Rajya Sabha and constituted a group of 10 MPs to deal with issues relating to Parliament affairs. She has also appointed Gaurav Gogoi as deputy leader of the Congress in the Lower House, whereas Ravneet Singh Bittu has been appointed as party’s whip, K Suresh continues as chief whip in Lok Sabha.
This comes just days after a fiery Congress Working Committee (CWC) meeting in which a “dissent” letter by 23 party leaders called for restructuring the Congress. After high drama which saw the signatories of the letter being criticised on multiple fronts, the meeting ended in favour of Sonia Gandhi continuing as interim chief of the party for the time being.
All this clearly shows that Sonia Gandhi is not really interested in capable leaders and rejuvenating the party currently being run in a most unprofessional manner, like a dictator with the help of close “chamchas” or loyalists. With the remote-control in her hands and party gets further destroyed.
The Congress has some effective leaders like Sashi Tharoor, Sachin Pilot, Manish Tiwari, Mallikarjuna Karghe, AK Anthony, Motilal Vora, Kapil Sibal, etc, but all are side-lined or ignored, why? Looks like those who cannot say Yes, Ma’am to Sonia Gandhi and family have no future in today’s Congress!
Looks like grand old party Congress will never bounce back or be revived under the current leadership. Who can save the Congress from further extinction?
—Jerry Fernandes, Saligao