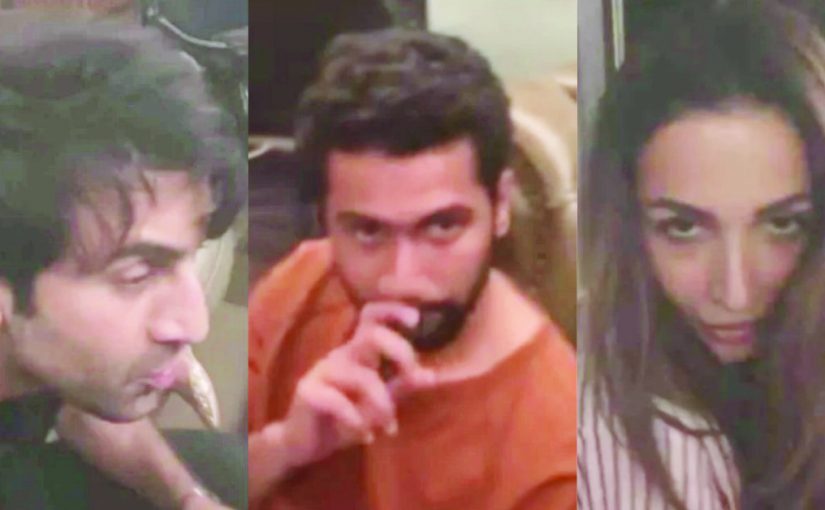 LEAKED: In a video leaked online several Bollywood biggies are shown consuming drugs. Rhea is also alleged to have given the Narcotics Control Bureau a long list of celebrities who are on drugs regularly

With NCB exposing the buds syndicates, Rhea Chakraborty has been arrested and Kangana Ranaut has obtained a stay on the demolition of part of her bungalow by the Shiv Sena run Municipal Corporation of Mumbai…….

Even as the Narcotics Control Bureau (NCB) crackdowns on the drug syndicate linked with the Sushant Singh Rajput death case, the apex narcotics agency trails another major syndicate operating from Goa, accused of supplying curated marijuana (buds) to several Bollywood stars.
The interrogation of drug trafficker Fayaz Ahmed, associated with a luxury resort in Calangute, Goa, has revealed names of over a dozen Mumbai based film personalities who were being supplied buds, highly placed sources in NCB told IANS.
Though after his arrest on September 2, Fayaz Ahmed turned out to be a COVID-19 positive, yet his thorough interrogation by NCB sleuths has unravelled the entire network and nexus of Bollywood-drug mafia. Ahmed revealed that drugs were being transported by means of parcels through Foreign Post Office in New Delhi.
One of the consignments was dispatched by one Dan Patel, a resident of Modugno street, Saint Laurent, Canada. Saint Laurent, a borough of Montreal city in Canada’s Quebec state, is infamous for drug cartels and crime syndicates, many having Indian connections.
In his questioning , Fayaz Ahmed has reportedly said that parcels containing curated marijuana were collected either from New Delhi or from a shop located in Calangute-Anjuna Road in Goa. Once the consignment reached Ahmed the suppliers in Mumbai were contacted. For every one gram of buds, 5,000 to6,000 were charged.
The entire racket linked with Canadian drug syndicates was unearthed by Deputy Director (operations) of NCB, KPS Malhotra, who is also supervising the investigations into Sushant case, in which actress Rhea Chakraborty brother Showik and Sushant’s manager Samuel Miranda has been arrested.
Top sources in NCB said that over a dozen drug suppliers have been identified during interrogation of several drug traffickers and peddlers including Fayaz Ahmed. Similarly key information has been extracted from drug supplier AbdelBasit Parihar, who was procuring drugs from one Zaid Vilatra and delivering to Samuel Miranda. The NCB is also trying to find any link between the syndicate associated with Parihar and that of Fayaz Ahmed.

Sources in NCB said that enough evidence has been gathered by NCB during interrogation of Basit Parihar, his aides Abbas Lakhani and Karan Arora on supply of buds to leading Bollywood personalities. Information on cocaine and other high quality drugs delivered to Bollywood personalities is also collected.
The NCB sleuths are gathering more evidence on drug cartels which could eventually result in a ‘nationwide coordinated action’ against cartels, hawala operators and key peddlers involved in supplying narcotic substances to some of the best known names in the film Industry.
The investigation into the drug connection in Sushant Singh Rajput death case so far reveals that besides supplying buds, certain cocaine cartels active in Mumbai were also supplying high quality drugs. Cocaine priced at `5 crore per kilogram is a highly expensive party drug usually supplied to high end customers in metros.
In Sushant case, the WhatsApp chats suggest that only buds, which come quite cheap in comparison to cocaine were being delivered. Meanwhile after the arrest of Showik and Samuel on Friday evening, the noose is tightening in on some other key suspects who were close to Rhea Chakraborty.
Showik and Samuel’s arrest came in after the duo was found to be involved in drug deals. Their financial transactions and digital records were verified by the NCB and 12 other transactions were also unearthed before cracking on Showik Chakraborty, sources in NCB said.