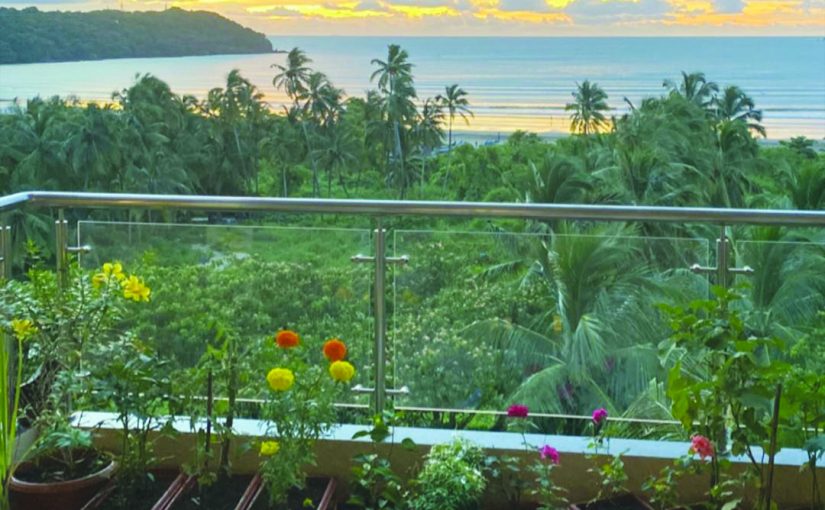 The month of September has always been famous for its sunsets. With the extended monsoon showers now and again the play of lights in the sky at dawn as well as dusk are worth looking at…..in fact many nature lovers have been clicking away mother earth’s finest ephemeral artworks with passion and posting them on social media. This is a picture taken by “Goan Observer” reader Naseema Arewale from the balcony of her home overlooking Caranzalem beach. Thank you, Naseema!

The Aam Aadmi party is pushing only one plus point: That is supplying oxymeters to the public. This is good but will it save lives? Yes, but not save all lives will be saved. Unless the people are tested twice a day. Ensuring tests twice a day means having many more oximeters handy. This is only by way of an early warning signal of the Covid-19 infection. So what next? Do we have sufficient beds to accommodate patients in need of oxygen boosting? Do we have health and caregivers to attend to patients in need? Why do people hesitate to go to Covid-19 hospitals and centers? Is it because treatment and caretaking is not on par with WHO protocol? Covid Hospitals need more doctors: AAP has boasted of having several doctors in their party. Who are they and will they come forward? Let these doctors start their own Covid-19 care centers or hospitals and strictly implement WHO standards to save lives of those patients who also suffer co-morbidities. This is best practice.
In Delhi AAP is the government. Not so in Goa. They need to innovate and not just copy!To give the best we need oxymeters, HFNC and experts using the same, CPAP, PEEP, ventilators, beds, doctors and caregivers. Experts who follow WHO’s Clinical Management of Covide-19 guidelines. Unfortunately our fate is good, better or worse.
—R Fernandes, Margao
GOODBYE NILA MOHANAN!
IT is very unfortunate that in the midst of a raging pandemic Goa’s dashing Health Secretary Nila Mohanan has been suddenly transferred to Delhi. Nila Mohanan has been virtually the commander-in-chief leading the COVID-19 battle in the State. The very hard working and ever so no-nonsense officer has led from the front.
Considering that current growing number of COVID-19 cases in Goa, the government should have retained her prudently instead of moving her out from the battlefield at this juncture. Her transfer may be due but the health of our people at this stage should have been a priority.
Nila Mohanan who was posted in Goa in 2014 has proved her mettle from day one. Her performance earlier as North Goa collector was remarkable. I recollect that when she had just assumed office she had to clear a file pertaining to the comunidade of Serula regarding that illegal land grab case by a then sitting Minister. She took the pains to go through the entire Code of Comunidades and made sure that she could not be misguided. That was the level of integrity and uprightness of an outstanding IAS officer Nila Mohanan that she has been. All the very best Nila Mohanan!
—Aires Rodrigues, Ribandar

APOLLO SUPPLY OF MEDICINES
THE Directorate of Food and Drugs Administration at Bambolim must investigate the case of the missing two tablets in an otherwise intact and sealed 10 tablet strip of steroids. This strip should contains 10 tablets but two tablets were not loaded and this indicates the carelessness of the pharmaceutical company manufacturing the steroid tablets called Defsa’ orDeflazacort’, life-saving drugs. This is a second instance of such a thing happening and earlier there was a different issue vis-à-vis Welness Pharmacy, Panaji. The tablets were prescribed by our NIO dispensary doctor and from authorised Apollo chemists for a NIO patient. I suggest an investigation of supply coming from Wallace Pharmaceuticals with sales through Apollo chemist at St Inez, Panaji. (I enclose a photograph here.)
—Stephen Dias, Dona Paula
LIBERATE INDIAN MEDIA!
INDIA has officially surpassed Brazil with regard to coronavirus cases and now has the second highest number of cases in the world at over 4.2 million. But our Indian news channels are deliberately focusing on senseless debates like the Sushant Singh Rajput suicide mystery, Rhea Chakraborty connection and Kangana Ranaut’s useless distractions, torturing viewers with needless debates. Important issues like the pandemic are not important enough for discussion but SSR mystery death is! And the media channels are fighting openly like cats and dogs to improve their own TRP ratings in India…looks like these news channels are police, CBI, NCB, Supreme Court and everything in this world rolled in one, everything but reporters!
We have more than 20 million job losses. GDP is at an all time low and running minus, minus. Farmers and low-income or no income poor are struggling for a single meal per day. Young generation is looking for jobs. Government is selling all profitable public sector industries and businesses. And our news channels are wasting our time feeding us with personal drama baazi of film stars and politicians who think they are celebrities too. How has our country degenerated so much and why!? Happiness was viewing Doordarshin some 30 years back when news was provided with decorum and one never heard such shouting around as one hears today from the media channels. Today media channels are full of negative noise and debates more and more venomous, chaotic and deafening to the ears and senses.
We want more positive news, a good percentage of problems are created by fake media. Indian media needs to be liberated from the clutches of the real enemies who are rabid communal politicians/fascist right-wing organizations. Jai Hind!
—Jerry Fernandes, Saligao

WEAR A MASK!
I HAVE been wearing a mask inside buildings and areas of congestion outside since March when this whole thing went down. I’m not sure how being considerate to others for the common good is now being mocked by some who are calling it “living in fear,” but it needs to stop.
When I wear a mask over my nose and mouth in public and in the stores/supermarkets/pharmacies/offices – I want you to know the following: