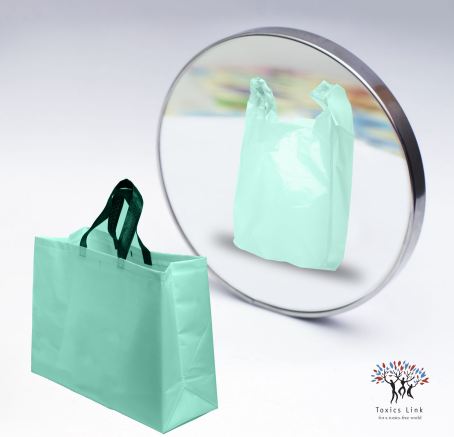 You must have seen them and fallen in love with them! These silky fine look-like plastic bags proudly labelling themselves eco-friendly and biodegradable and God’s gift to humankind. They will solve the very huge and rea problem of plastics, plastics which are one of the biggest curses and menace to the wellbeing of Mother Earth as we know Mother Earth – nurturing, life giving.
Now the Delhi-based environmental group Toxic Links have a new research study titled “Environmental Illusion. The Non-Woven Bag.”
Reportedly these so called “non-woven” bags were released in Delhi are not so eco-friendly after all, they are just pretending to be eco-friendly! Says the Delhi-based Toxics Link survey, these bags are actually polypropylene (a form of plastic) which do biodegrade but into what? Finer and even more deadly micro plastics so that you may not even see them in your food chain if you don’t look with a super fine microscope.
The study done by Priti Mahesh exposes the huge hypocritical scam. These buttery light bags to be seen everywhere in shops and malls are absurdly being promoted as “non-woven” bags for some reason, but are really nothing but polypropylene which is a form of plastic far, far worse. The study results say that 88% of the respondents questioned have replaced plastic bags with alternatives while 45% have replaced plastic bags with these NW bags. Ironically, all markets where single-8use plastic is banned are now being swamped with these NW bags and they are creating a huge confusion amongst consumer perception.
There is a need to inform and educate consumers, says the research summary, so that they can decide on their own whether they want to accept or refuse these NW bags while out shopping or buying food from eateries and restaurants (the food business uses plastic ware majorly across the country and especially in the big metros).
The Toxics Link survey was carried out amongst different retailers and vendors in Delhi to assess the usage of plastic bags and its alternatives and looked at different types of establishments to evaluate if the widespread use of plastic bags or their alternatives seen as more eco-friendly. The discovery is that for want of correct information or misleading information many retailers have taken to offering these come lately non-woven PP bags thinking it is biodegradable and eco-friendly!
Five samples of these “non-woven bags” (appealing promotional line presumably) were sent to an accredited laboratory in New Delhi and it was clear that polypropylene and polyester (both are plastic resins) were found in them.
So it clearly confirms that consumers are being hoodwinked royally and those feeling virtuous about doing their bit to shun plastics are not really doing so! Observes researcher Priti Mahesh, the lower cost of these NP bags compared to most other alternatives is one big reason why the establishment prefers to dish them out. Secondary research indicates they’re all over the country now and pose an equal if not bigger threat to the environment because they degrade into micro plastic residue far more easily and quickly!
Priti Mahesh who is the chief program coordinator of Toxic Links says the NP bags are “not the lesser of two evils.” They’re every bit as bad and in fact worse.
At the national level Plastic Waste Management Rules, 2016 have been enacted, wherein the minimum thickness of the bags which can be used is 50 microns. There have been also stricter regulations at the State level with some states banning plastic bags of any kind entirely and some restricting their use in ecologically sensitive areas. States like Maharashtra, Tamil Nadu and Karnataka have specified banning of non-woven bags in the overall plastic ban regulation. However, the industry continues to assert that NWPP (non-woven polypropylene bags) are the best alternative to polythene or regular plastic bags! They even say the new material bags are biodegradable which is laughable. In any case there is so much lack of clarity on the subject which is of a serious nature and the authorities concerned should certainly look into it immediately so that damage control steps may be taken. Some local and regional government agencies have already explicitly admitted that the NWPP bags are not the right choice and should be banned from patronage and usage.
“Regulatory agencies have a huge role to play in including non-woven bags containing plastic resins, in the list of banned or restricted plastic bags, as done by a few states already. But even beyond this, there is a huge need to educate the establishments, who at times have voluntarily shifted to non-woven bags as a measure to be environment-friendly,” says Satish Sinha (associate director, Toxics Link).