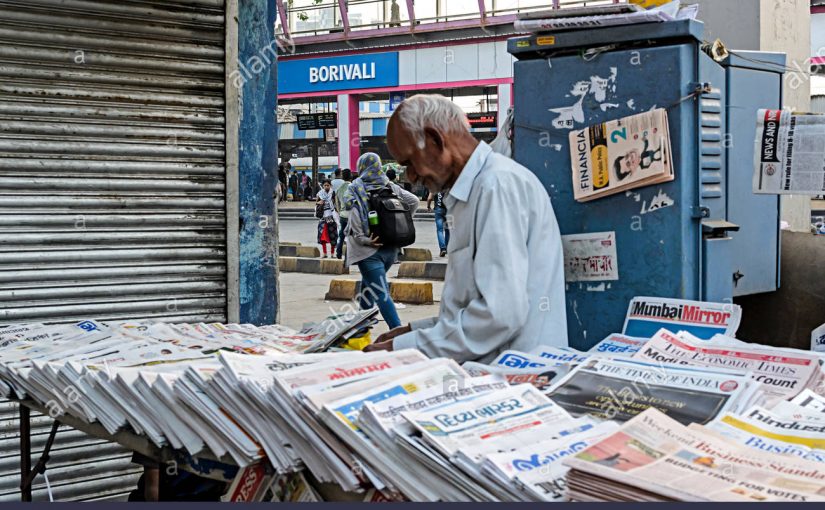 MANIPULATED: Advertisers release ads in papers with the highest circulation in the cities of their interest. No editor or publisher tells a truth about their circulation figures which are routinely manipulated. in collusion with agents.

Just as TV channels rig the Television Rating Point (TRP) newspapers also manipulate their circulation and readership figures. There have been allegations that newspapers pay outlets in black money to issue receipt of having sold much more copies than they actually have…….

Hindustan Times and The Tribune recently engaged in an advertisement war in Punjab over readership top spot.
In yet another instance of two newspapers claiming to be the top publication in a region, both The Tribune and Hindustan Times (HT) have declared themselves as number one in Punjab.
While the newspaper business is on a steady decline across the world, the industry has been registering a healthy growth in India. The market for print advertisements continues to be lucrative, which is why publications vie to project themselves as the biggest player. The larger a paper’s reach, the higher the amount it can charge advertisers.
On January 20, HT‘s Punjab edition ran a full-page advertisement on page 1, claiming to have an average issue readership (AIR) of 2.7 lakh, ahead of The Tribune‘s readership of 2.4 lakh, as per the Indian Readership Survey (IRS).
IRS is conducted by Media Research Users Council (MRUC), a not-for-profit private organisation that surveys hundreds of thousands of people on their media consumption habits to arrive at their figures.
The “news” of HT overtaking The Tribune in the latter’s stronghold triggered much jubilation among the former’s employees. Three days later, on January 23, The Tribune hit back with a full-page advertisement of its own. The front-page ad proclaimed that The Tribune was the leading newspaper in Punjab, according to IRS, and thanked readers for the achievement.
The self-congratulatory advertisement read: “According to the latest IRS 2017 report, The Tribune has a total readership of 6.51 lakh, which is more than the total readership of Hindustan Times (3.79 lakh) and The Times of India (2.43 lakh) put together.”
The Tribune‘s retort sparked much discussion in the local journalist community. Screenshots and PDFs of The Tribune and HT‘s front-page ads were circulated and hotly debated on WhatsApp. Reportedly, even the junior staff members from the circulation departments of both newspapers were left puzzled with the rival publication’s claims.
HT chose to harp on its superior AIR, which is about 30,000 more than The Tribune, according to the IRS report. The Tribune selected another criterion, total readership (TR), which is 2.72 lakh more than HT‘s.
A Chandigarh-based staff member of HT, requesting anonymity, said that after the survey was released, the marketing department of the company’s headquarters in Delhi decided to roll out a full-page advertisement along with an article detailing HT‘s growth and achievement. On the same day as the advertisement, the paper’s Delhi, Mumbai and Chandigarh editions ran a story bearing the headline ‘Hindustan Times is No. 1 in Delhi + Mumbai’.
A senior member of The Tribune‘s marketing team said that after HT‘s chest-thumping, they held a meeting in their Chandigarh office, pored over the IRS report’s findings and decided to highlight the TR metric as it was in favour of The Tribune.

Ravjot Singh, who owns a gas agency in Khanna, Punjab, and reads both HT and The Tribune every day, said both papers’ claim of being the number one made him think both must be having the same readership. “Both are credible sources of information. While The Tribune is the traditional newspaper of Punjab, HT is a national brand. The full-page advertisements published by both newspapers recently left me confused as to what they were trying to highlight,” he said.
Rishi Vohra, senior manager of MRUC under whom the survey was conducted, said both AIR and TR metrics are equally authentic for a newspaper. He said the only thing is that the survey methodology for both metrics is different.
He explained that to assess a newspaper’s AIR, an interviewee is asked which newspaper he/she read the day before. To arrive at the TR, an interviewee is asked which newspapers they have read during the past one month. He said the TR metric was introduced this year itself.
For IRS 2017, the MRUC interviewed a sample of 3.2 lakh people. While the IRS depends on field surveys and extensive interviews to arrive at its findings, the Audit Bureau of Circulation (ABC) examines newspapers’ internal records to determine their readership.
Adil Kasad, a senior auditor at ABC, said over the telephone that an audit is held every six months for a news organisation and its circulation is certified.

Indian newspapers don’t shy away from locking horns with rival publications over claims of higher readership. On June 14, 2014, HT had carried a report bearing the headline ‘TOI cannot digest readership survey findings’. The story called out The Times of India (TOI) for lambasting the findings of IRS 2013.
Three months later, TOI published a report, dismissing HT‘s claim of having a higher circulation in Delhi. It read: “Based on the Audit Bureau of Circulation report (July-Dec 2013), Hindustan Times has come up with a claim that its circulation in Delhi NCR is comparable with that of The Times of India. However, a closer examination of ABC figures reveals that as much as 26 per cent of HT‘s claimed circulation (10.6 lakh copies compared to TOI’s 10.4 lakh) comes from a rehashed, mini version called HT 2 Minutes.”
Around the same time, The Times Group’s Kannada-language daily Vijay Karnataka was running an ad campaign directed at advertisers, claiming that its circulation figures were accurate and not inflated.
The print industry faces allegations that since the ABC goes by internal print records of newspapers to determine their readership, some publications print far more copies than they have readers so that they can manipulate the readership numbers. Reportedly, extra copies are printed in tens of thousands and end up straight in the dustbin.
Acknowledging this practice, Vijay Karnataka advertisements read: “We promise never to forget the difference between sold and unsold copies and therefore never to count copies that are doled out to dealers to inflate our circulation numbers.”
A year before this, TOI and Deccan Chronicle (DC) had engaged in an aggressive advertisement battle in Hyderabad over who had a higher readership in the southern city. Both rolled out full-page advertisements, staking claim to the throne and calling each other out without taking the name. DC went so far as to diss TOI in a not-so-cryptic manner with full-page advertisements screaming FU and FO in large letters, with the fine print expanding these acronyms as “Figures Unfold” and “Figures Out”.
Sheetal Thapar, assistant professor at the journalism department of Punjab Agricultural University, said newspapers resort to self-adulation to position themselves as the market leader and capitalise on that image to gain more readers and advertisers.
“More readership will mean more revenue and this is the reason why newspapers vie against each other to show that their circulation is more than that of their rival,” she said.