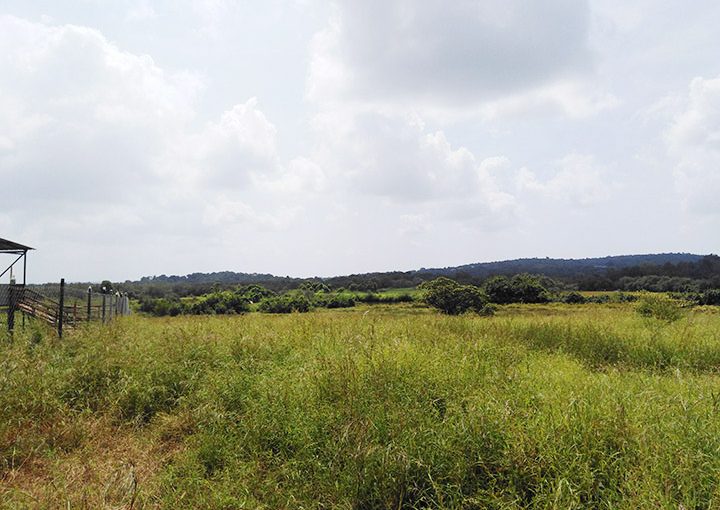 TAKE A BOW WITH SALLY GOMES!

The hilly uplands of Aldona are great pasture land

One never knows when a day trip out to village Goa turns into an inspirational adventure like no other…listen to this story about another, better Goa, the Goa I love!

SHE’S the gutsiest young women I’ve met in Goa in recent times! Here’s a story of an amazing better Goa, an inspirational story like no other for other young Goans to take cues from. Meet Sally Gomes of Aldona. In her mid-30s something, she is quite possibly the only strong hands-on young woman I have had the pleasure of meeting, who is in the business of animal husbandry on such a large scale. She spends her waking hours keeping a bunch of farm animals company, namely a hundred odd pigs, goats, poultry.
She’s got more or less a hundred life stock of each category, she replied to a query, and I could see her pigs were wallowing in the good life, newly bathed; the goats looked kingly, and mama and papa and baby poultry refused to scatter to my feeble “Shoo, shoo out of my way you creatures and let me pass!” It was a mundane déjà vu filled morning when we decided to set out for Aldona on a Sunday. Out of the blue the hubby insisted, “Let us go meet Sally. I don’t know, maybe she is Julie. I got a message from her because of something I put out on Facebook – she says she is ready to adopt us as a senior couple unable to cope with life. I must meet this young woman!” What nonsense, I snapped, surely you know better than to put out nonsensical posts on FB!
ANYWAY, off we went on a rare adventure and what a rewarding morning it turned out to be as the day proceeded. The village of Aldona is quite a historical village, some 2,000 years old; quite a few famous people live here in the much favored restored Portuguese houses of old. Many are the stories coming out of Aldona and I must catch up with them later on, after meeting Sally. Our adventurous friend Clara Vaz also of Aldona was determined we meet her to solve our mutual problems with life’s travails as we grow older!

Across Mapusa river and cable bridges of Manohar Parrikar fame we arrived at Aldona village crossroads and took the narrow country lanes to say hello to Sally Gomes. She is a vivicious, energetic woman, in her mid-30s something, she and her husband were busy washing down their pigs with long hoses…I squealed, is that fair fatso creature a Yorkshire? And the other pigs or hogs…yes, Hamshire, Duroc, the all-Goan Agonda. The farmland is located out on rocky landscape where the couple have built high stilted pig shelters in such a way that the farm’s most prized animals may be given a bath every day and after that they may live their social life without distraction.
Oh yes, pigs can be interesting farm-reared animals, Sally commented to a query. What do I know about pigs! I exclaimed. This adventure was turning out to be more than what I had expected. Catching up with this sweetheart woman called Sally could put a lot of us to shame with the kind of dawn to dusk work (including manuel labor) she packs in the hilly outdoors of Aldona village.
HEY, Sally has got an MBA from Manchester. She quit a 4 lakh a month job in Scotland to return to Goa to start an animal husbandry farm and dream of living life queen size eventually with her pigs, goats, poultry, and architect husband. He was busy with the pigs and didn’t feeling like catching up with the visitors, maybe another time, later, if we hung around till nightfall. The couple have used their55 lakh savings to return to Goa, rent 10 acres of land from a friend in Aldona in a business deal to do with rearing pigs, goats and poultry for the time being at least.
When enough profits come in they hope to invest in extended ventures like maybe doing a dairy farm, growing organic vegetables and fruit – but for the time being, says Sally, they have got enough on their daily plate to be happy about. She has a daughter whom she introduced to me later at this rambling, rundown, vintage house nearby, where she spends time after the day’s work is over – for families of goats and poultry are being taken care of here in the courtyards of this old rambling home; while the piggery farm is set further up in the hilly highlands of their farmland on the outskirts of Aldona, was quite a distance away.
“But we’re moving the rest of our livestock to the ten acres of highland very soon,” said Sally, I have built log cabins and more are on the cards. Oh yes, her main money come from selling baby pigs and poultry and the 2,000 odd farm range eggs collected during the week (retailing at 180 per dozen in the market but I may buy in wholesale at the farm at130 if I wished to relish farm-fresh free-range poultry eggs – a far cry from the industrial poultry farms wherein poultry is generally unhappy, pumped with hormone-filled feed, present a sad picture of cruelty in animal husbandry.

My friend Sally Gomes believes in freedom to be happy when it comes to the animal husbandry business, so her animals are in great demand. It’s backbreaking work but it’s a dream coming true for her, she said, when we finally sit down in her makeshift home to share some conversation, “I started feeling lonely out in the UK when I was barely 30 years! I knew I had to come back to my motherland Goa where my parents and brothers live… I am a good daughter although my parents may not like what I am doing in animal husbandry!”
Very soft-spoken, Sally confided that she is a Panaji-born and bred girl, her parents would have been happy if she had lived her life abroad but it was not to be. Her happiness lies in her home state and look, she is doing fine….she has to put in some more work before it yields more dividends, then maybe she will be able to sit back a little more to spend time with her daughter who, of course, from the looks and sound of it is growing up at home with the pigs, goats and poultry, having fun imitating the animal antics! She must do something about harvesting all the goat palletes, it’s good manure she can retail at the farmer’s markets which take place routinely in Goa now.
(Sigh) Yes, she is looking for funding to straighten out several issues of their animal husbandry business but she finds government schemes exist only on paper! They baffle her. It’s that or she has no one to do any public relations and documentation work for her to get her the loans she can do with … but it will happen slowly and steadily, she says, as soon as she moves lock, stock and barrel to her farmlands and a few more ideas she has take root and grow wings. No worries! Look here, she is happy doing what she is doing and don’t forget she has got experience in finance, it helps…. life is can be hunky dory although she can do with more help, labor is a huge problem and yes, “I have adopted some folk to help me, take care of my daughter while I’m busy and so on.”
The old run-down home in which she has been living can be restored, am I interested? I tell her I wish I had the kind of money I need to retire to an interesting farming country lifestyle in Aldona which is piquing my curiosity more and more …Aldona, interestingly, is bursting with real estate projects nowadays and there’re lots of homestays and resorts here, along with a bustling working Panchayat. There are several famous landmarks in Aldona and many stories waiting to be told (by me of course!).
I think I’ll have to go out a couple of days to Aldona to follow this amazing Sally Gomes around like a lamb, help her feed the goats with bags full of tendli and poultry – what do they eat? I forgot to ask her. What do the pigs eat by the way? A lot of organic market vegetables, from the sound of it. Do farm animals love you back if you feed them right and shower tender loving care on them?
NEEDLESS to say it turned out to be an unforgettable Sunday outing and now in my latter day years I’m dreaming of a country life in Goa, far, far away from the Panaji I love. Maybe, maybe not. I grew up on the island of Penang in Malaysia but in India I’ve become an urban woman, what do I know of country life in Goa? But this is to say my good wishes are with Sally Gomes (Judy is her other name) and may she grow from strength to strength in her ambition of restoring animal husbandry farming big-time in Goa – with a difference.
She is doing all organic, eco-friendly animal husbandry and if you go spend some time with her pigs, goats and poultry, it’s easy to get the idea that they’re all happy animals out here living on a high of sunshine and clover…lots of velvety purple clover is growing out on the hilly highlands of Aldona where Sally spends most of her time working on her farmlands. She comes across as an eco-friendly soul, then she is just the right company for me!