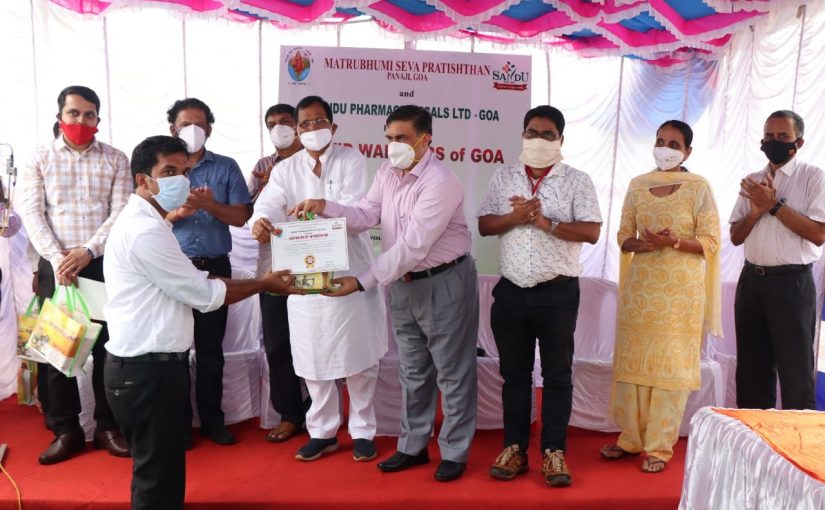 Union MInister of State for AYUSH Shripad Naik is back in form after recovering from Covid-19. He has been felicitating Covid-19 warriors who said yes to Prime MInister Modi’s call to fight and wholeheartedly support State governments combart and control the dreaded pandemic. In the above photo he is felicitating the Covid-19 warriors of Mathrubhumi Seva Pratishthan Goa and Sandhu Pharma . The minister said that India has given a very good fight against Covid-19 while speaking at various functions to acknowledge the gallent work of healthcare persons. Other dignitories at the function include Umesh Sandhu (director, Sandhu Pharma.) Certificates and immunity booster kits were distributed. Others in picture are Goa Assembly Speakar Rajesh Patnekar, Mayem MLA Pravin Zantye, school head Pravin Pandit, President Sagar Shetty, Deputy Collector Deepak Waingankar and also Heath Officer Dr Medha Salkar

THE government is taking full advantage of the on going worsening pandemic situation to quietly bulldoze unwanted destructive projects against Goans and their wellbeing. Goa will be destroyed forever. In fact, the government is aggressively filing bogus complaints/arresting individuals/NGOs for raising their voice and educating Goans against mega projects which will change Goa for the worse; it is also busy portraying Goans as anti-social elements or road-side goons in different parts of Goa.
The government has indeed put whatever is left of Goa on sale at the behest of the central BJP government for projects which will bring it money. There are no benefits for Goans (as being claimed through the media) but there are benefits for migrants from the neighbouring state – this will irrevocable lead to Goa losing its unique identity which so many love and come to Goa to take some pleasure in.
Goa is being destroyed by power-hungry traders, so called elected “leaders,” and today if this tiny state is on the verge of completely going to the dogs, then it is solely due to “succegad” Goans who keep electing the same old rogues for years on end despite knowing their past track record, and because they never know on how to unite as one over a variety of issues in the state by keeping their respective religions behind.
I feel that there is absolutely no chance of stopping the on going destruction of Goa because Goans are born indifferent, they just love to live a most self-centered family life full of “folgham” (unlimited enjoyment), fully isolated or cut-off from the outside world and with a “mhaka kiteak podlam” attitude. It is this this attitude of Goans that politicians have taken advantage and due to which we are seeing them today daringly bulldoze some of the most unwanted destructive projects just for the sake of filling their own personal bank accounts and destroying Goa right in front of all these niz Goenkaars in the state.
— Jerry Fernandes, Saligao

FACE MASK ISSUES
THE issue of whether to wear or not to wear a face mask is being hotly debated, especially since those that have leftist inclination suggest that face masks should not be worn.
What seems to be a common sense explanation as to why, where and when to use a face mask, should be pertinent. In such a situation, especially in crowded places where the density of people is very high, under any circumstance it would be prudent to wear a face mask to completely protect oneself from infection from another person. In crowded public places such as a bus, train, in the marketplace wearing a face mask is compulsory.
Also, after wearing a face mask for a long time, it would be prudent to retreat to a place such as say an office with cross ventilation or elsewhere if possible, like an open place where ample supply of oxygenated air is available to reduce the impact of wearing masks much of the time and thus rejuvenate oneself with oxygen supply to the lungs in the vicinity of trees with plenty of green leaves, so that the oxygen produced by photosynthesis can replenish the supply or oxygen into the lungs.
There is every possibility that wearing a face mask for long can result in breathing in exhaled air with carbon dioxide and this may congest the lungs to cause breathing problems. In an open space like a garden or a sports stadium while walking, jogging or running or playing it is prudent to remove your face mask for rapid breathing during physical exertion may lead to pulmonary congestion.
Also when moving up against gravity such as climbing steps or running uphill it would be prudent to remove the mask. In other words, be judicious in wearing face masks. Be discrete, be safe, be healthy.
— Elvidio Miranda, Panaji

THE BIG PICTURE
NGT ruling to demolish all structures-permanent or temporary violating CRZ laws is welcome. Last year 488 structures were raised including those within the 200m HTL.
The small picture: so many illegal structures! How is it possible? Will this be the end? Note, some Panch members showed sympathy to these land grabbers saying they paid licences! This shows that these lands are prime lands. And those who built these structures are not the only gleaming-eyed ones. The rich are rubbing their hands at this ruling.
The Big Picture. The Centre is trying to lower the HTL — now 200m to 50m! Why? What will happen is just that: laws will be changed at the right time, to benefit the right people. We will then be in a very familiar position: Mollem projects which will be beneficial to locals like providing jobs — which some locals in Mollem are already hopeful of, double tracking will give jobs to locals, nationalisation of rivers, marinas, etc. The structures will once again come up and the NGT will have to approve the same as the laws will then provide for the same. The only change will be: the structures now belong to different people: people who had a vision, the big timers.
Punjab has enacted four bills to counter the Central anti-farmer farm bills. We need to do that here: Whatever the HTL, we need a local bill to maintain 500m. Prevention is better than cure: see the struggle with coal.
The NGT ruling is truly amazing: Tturtles are required to be protected, even from artificial light! They are the high caste of the animal kingdom? The leopards, bisons, armadillos, flying lizards, even tigers from Mollem can be sacrificed? Jungle lives also matter!
— R Fernandes, Margao

IN NETHERLANDS
MANY are now convinced that the Covid-19 pandemic is a huge scam and lockdowns a huge disaster. Cases based on PCR testing reveal that 90% of the cases are false positives and false negatives and we don’t have sick people, 86 percent positive cases have no symptoms. They are normal healthy people. There is no reason to carry on with lockdowns. Lockdown has made zero difference. The pandemic is really just about a normal flu virus! In the Netherlands a large group of doctors and 87,000 nurses don’t want any vaccines being prepared for them. The regular press is now publishing news that the PCR tests are false positive majorly.
Eighty-seven per cent patients have no symptoms So if there is no pandemic or it is a trumped up monumental disaster then the children have a fundamental duty to go to school, to an education. Let’s stop looking at these PCR tests full of false positives. This is not the correct test. In Netherlands many groups are filing legal cases against various people spreading the pandemic panic! Perhaps we in Goa can also lead the way and exposing PCR tests.
— Pankajabala R Patel, Panaji