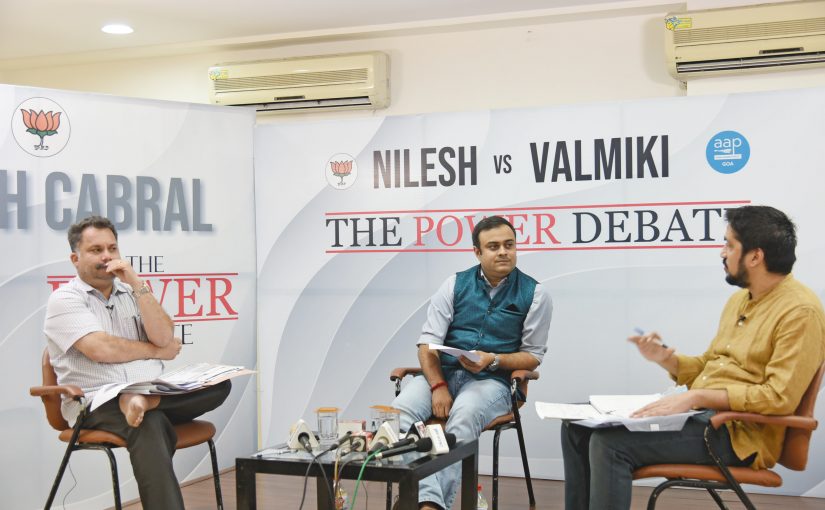 No, of course not although they can continue to dream of it, says Our Special Correspondent

The much waited power debate between Minister of Power, Nilesh Cabral and AAP Leader, Valmiki Naik finally took place on November 25, 2020 on Wednesday in Panaji

GOANS may only dream of steady interrupted power in this lifetime! The majority in this country still dream of paani, bijli, sadak in vain. Even in the smallest state of the country, Goa. What was meant to be a tempers flying debate between Power Minister Nilesh Cabral and AAP functionary Valmiki Naik at a press conference at the EDC building in Panaji on Wednesday, November 25, 2020, ended without anyone believing anything, least of all media people who’d turned up to listen to the totally televised debate.

As a matter of fact even Delhi’s much-praised model of free power which is being criticized for its populist features (just a criticism although the poorer working classes are breathing a sigh of relief and adoring Arvind Kejriwal to the skies). Goa’s Power Minister Nilesh Cabral who had come armed with lots of figures is not impressed by the AAP model of power distribution in Delhi and it is clear he has brainwashed himself into thinking that Goans are better off in Goa with their newly hiked power rates!  AAP’s Valmiki Naik scoffed that if in nine years in power the BJP had not succeeded in bringing down electricity prices, at least for domestic  consumers, it is left to be seen if there’s any good news from the citizen’s point of view in the next one year.

Never mind that Goa does not have a power plant of its own and is still dependent on neighboring states Big Brother Karnataka and Big Sister Maharashtra for its power! Mr Cabral in his high-powered rebuttal to Valmiki Naik’s digs promised all the way that soon seven lakh or 6.5 lakh power consumers in Goa will be put on to smart meters, “I want to convert everybody to smart meters. I have one year and at two months left for my term and I will try to push it.”

Nobody understands what these smart meters are going to be all about of course. It is left to be seen. All the digging going on to lay underground cables is also earning a lot of ire from Goans. To date no power ministry or power minister has succeeded in giving Goans and Goan industries State-based 100% power 24×7, although some upmarket residential areas don’t feel the heat courtesy the installation of powerful power generators.

Much of the highly touted debate moderated by Pramod Acharya of Prudent Media was so much dramabaazi with both Cabral and Naik stressing their points of view: The former insisting power is cheaper in Goa and had Goa has no reason to copy-cat the Delhi model, while the latter sang hosannas to Delhi Chief Minister Arvind Kejriwal’s latest scheme of free power to Delhites (as long as they don’t consume more than 177 units).

Goans pay Rs413 now for consuming a minimum of 181 units. So come to your conclusions. Never mind that the much-vaunted Delhi model is not complicated, it all depends on how lower down the social scale you have to be if you want free power. Everywhere in the developing world development lobbies cry for more power to guzzle and wealthier citizens chase the good life without sparing a thought for air, earth and water and how it is impacts the earth’s deteriorating climatic conditions, global warming, etcetera.

It’s a constant cry of: More power, more power! Goa’s Nilesh Cabral admitted that Goa’s infrastructure is poor, but he is keen about a lot can be done to improve the situation during his term as minister. The Electricity department collects about Rs200 to Rs300 crore every year by way of duty but the money goes to the consolidated funds of the state. If the funds go into a  separate account it could be used for development of much needed infrastructure.

In fact the Rural Electrification Corporation is offering loans to improve power infrastructure and what comes by way of electricity duty can be used to repay loans. Point is there have been too many longstanding promises, expectations and assurances all around but little has materialized to make the common man on the streets happy. Any Goan at street level will tell you how power woes just continue to grow on one hand while it is clear that funds are being squandered on purchasing more hardware  — so that the old may be discarded here, there and everywhere and visible to the public eye.

Valmiki stressed that he had not come for the debate for the sake of meaningless debating but as an aam aadmi voice seeking a break of from high power tariffs, like those imposed recently to shock most Goans post-Covid-19 and its lockdowns for the major part of the year. He rightly pointed out that electricity is a basic need for life cannot run without electricity. Cheap and reliable electricity is the right of every citizen and it is the responsibility of any government to ensure this.

The AAP leader compared the fairly new Delhi power model to the BJP’s model in Goa which only sees harder times for the common man, especially since corruption plays a huge role in who gets power and who doesn’t, this factor cannot be ignored. Valmiki said anyone consuming less than 200 units per month should get zero billing. In the Delhi model those consuming between 200-400 units had to pay only 50 percent while big business paid more (in Goa big business pays far, far less).

The Power Minsister rebutted this confirming that in Goa per unit is charged at the rate of Rs2.10 paise while in Delhi it is charged at the rate of Rs3.90 paise. To which  Valmiki replied that these are generated bills and paid for by the Delhi government, the government of Goa could do the same for Goans. Perhaps hinting that the profits the power ministry makes go elsewhere where they should not go. Cabral in turn retorted that his ministry is working on a no profit basis. Valmiki urged Nilesh Cabral to urge the government of Goa and Chief Minister Pramod Sawant to take an impartial look at the Delhi model, there is much in it for emulation even if power generation is sourced out to private companies. Power is something which should not only be cheap but also reliable.

The half hour debate ended on a low-key note with many more educated about the information Power Minister Nilesh Cabral shared. Valmiki Naik too held his ground against a clearly triumphant power minister who promised his long-term goal was to make power available at Rs1.40 to maximum Rs4 per unit and Rs3.65 to Rs7, “We’re creating our model in Goa!”

In the meantime, a media person in the background whispered that in Germany and the Scandinavian countries they were harvesting solar power to the tune of almost 90% and more, with excess power to give away or retail! We in Goa have abundant sunshine but few think it is worthwhile investing in solar power for long term benefits and for the sake of the environment. Not even the government of Goa which only looks only at short-term goals to benefit the few at the expense of the many who may not even be living in Goa to suffer the consequences!

2 thoughts on “FREE POWER FOR GOANS ANY DAY SOON?”