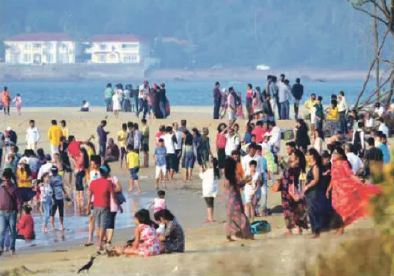 MASKLESS: Domestic tourists are back on the beaches of Goa with no regard for even wearing a mask, leave alone practice social distance.

Goa has become hot property — with tourists arriving in droves to WFH, buy realty, or just chill. And most of them have little regard for health or covid safety protocols
On April 12, the jubilant chief minister of India’s smallest state, declared that “Goa is Covid-19 free”. Pramod Sawant promised to ease the internal lockdown while maintaining strict limits on border crossings “to ensure we continue to remain a Green Zone”.
The same day, Audrey Menezes — the first and only woman elected to the governing body of the Goa Association of Realtors — found her phone buzzing incessantly with calls from across the country. Overnight, the state property market (which had dwindled to moribund in 2019) glowed red hot. “A great spike came out of nowhere,” she says.
Menezes tells Mirror there was — and remains — an unmistakably desperate edge to this churn of demand. People want to come to Goa right away. The moment the nationwide lockdown ended, and even before flights were resumed, people were simply getting into their cars to drive cross-country to get here. After the monsoon rains ended, large numbers flocked to rent and buy properties, often sight unseen. And as the hotels and restaurants opened up, even larger groups descended on Goa to holiday.
There’s a decidedly grim pallor to the party spirit in the midst of a raging pandemic, because the number of Covid cases in Goa are steadily edging up to 50,000, including almost 650 deaths (the highest percentage per million in the country). The state medical infrastructure is fraying at the limit of its capacities, and the resident population ¬— which skews towards the oldest in India after Kerala — is stressed with anxiety about the intrusions. What is more, most of the newcomers refuse to follow the recommended safety procedures.
This has resulted in a decidedly schizophrenic scenario, where two parallel universes cohabit and overlap in the same landscape. Most locals are scrupulously masked and try to maintain ‘social distancing’, with the older generation still effectively quarantined. Meanwhile, the overwhelming majority of visitors — often self-described as ‘coronavirus refugees’ — ostentatiously behave as though the virus doesn’t exist in the first place. All the while, Covid-19 cases keep rising, and some of its victims perish — at least a handful or two every day.
Earlier this week, especially jarring examples of the competing paradigms played out in the media, when Milind Soman and Poonam Pandey shared naked photographs of themselves (in the latter case she was merely topless) juxtaposed with Goa’s landscape. It’s highly unlikely that anyone would have cared about this at any juncture in the past decades, especially in a state where a bit of public nudity on the beach has never been especially frowned upon. But the fact that they did it during the pandemic severely rankled Goans. Now both of them have been booked under the IPC obscenity codes.
To be sure, an unmistakably surreal, and often almost unbelievable dimension has pervaded throughout much of what has happened in Goa over the course of the past few months. Audrey Menezes recounted how one of her clients — a household-name comedian — “rented an exclusive villa, with the main concern being the comfort of his dogs. After we did the deal, they installed their own generator to ensure uninterrupted AC for the pets, and he and his wife then hired a private jet to Dabolim so the dogs could travel hassle-free”.