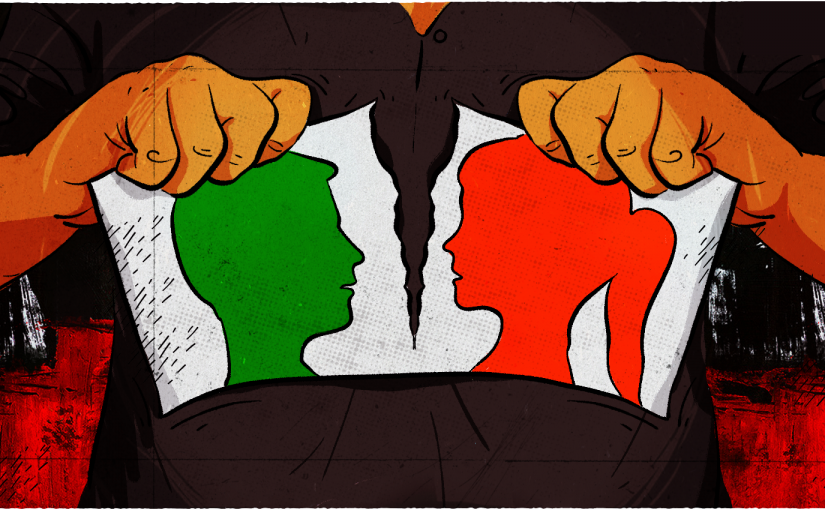 New laws only make love more vulnerable, will they allow men and especially women to live in equality and dignity under the recently framed law against ‘love jihad’ in Uttar Pradesh?

Nandita Haksar details some of the dilemmas and conflicts….

I could not quite understand my visceral reaction to the entire controversy over “love jihad”. It is not that I have felt strongly about other attempts to polarize the country by demonizing Muslims and blaming the entire community for the follies of a few. The pandemic started with the demonization of a section of Muslims who so foolishly congregated together without thought for the corona virus threat.
But this time I remembered the innumerable cases that I handled in the beginning of my law practice in the 1980s. These cases were of couples who came to me for help to get them legal protection from parents hounding them for the crime of falling in love with each other despite differences in caste and religion.
I saw how deeply hurt these young men and women were by the way their parents treated them; how desperate they were for social acceptance but how their love for each other gave them courage to face threats to their lives rather than give up their love for each other. I remember their names, their tears and smiles when I won their case. But it was not always through the law or enforcement of their fundamental rights that I was able to help them. Sometimes I sought the help of the women’s groups, other times I myself hid the woman in my home.
For me love is a sacred thing deserving of protection because just the act of falling in love across class, caste, or religion challenges the society’s most cherished patriarchal norms.
Gandhi was opposed to inter-religious marriages, even to inter-dining among different castes. Till the early 1920s, he regarded such marriages as contrary to dharma and he found several practical objections to such unions, but by April 1928, he had dramatically changed his opinion.
By 1931 Gandhi wrote that caste should not be a consideration in marriage; what was important for both partners was a sense of belonging to the same nation. He said he had “no moral objection” to even interreligious marriage as long as each party was free to observe his or her own religion. (https://www.yourarticlelibrary.com/marriage/mahatma-gandhis-views-on-marriage-and-varna/38526)
However, Baba Saheb Ambedkar said that inter caste or inter faith marriages would not lead to substantial change in society unless caste itself was annihilated. I think Baba Saheb Ambedkar was so right when he said: “I personally do not understand why religion should be given this vast, expansive jurisdiction, so as to cover the whole of life and to prevent the legislature from encroaching upon that field.”
He was referring to the fact that under the Indian Constitution freedom of religion is not merely a right to practice but also the right to propagate religion. Thus the Constitution has given the right to every citizen to profess, practice and propagate religion.
Way back in 1986 I wrote a graphic book called Demystification of Law for Women on how women’s oppression is rooted in patriarchy which is institutionalized through religion (all religions, without exception) and the family. And the Constitution does not see patriarchal basis of law as problematic.

OPpress Women
Thus, freedom of religion often means the freedom to oppress women. Religion and law ensure that the most intimate areas of life, marriage and sexuality are controlled within a patriarchal family. This is why even when the Supreme Court strikes down a law as unjust to women it does not strike it down on the ground that it is patriarchal.
There is a fundamental conflict between the two fundamental rights in our Constitution: right to life and liberty and the freedom of religion. Therefore, when people oppose the new law on forced conversions on the ground that it violates the right to personal liberty it is not enough. There is a need to expose the patriarchal basis of both religion and family.
The issue of love jihad came to the fore in Kerala when it was taken up by the Catholic Church. I do not deny the possibility of Islamic militant groups recruiting vulnerable women as they have done in the West; but they have targeted women from all communities including Muslim women. Muslims are in fact greater targets so the issue is not so much of forced conversion as it is of fighting an ideology.
But the Catholic Church fed into the growing Islamophobia by calling it “love jihad” and made it a communal issue between Muslims and Christians in the tradition of the Crusades.
The Syro Malabar Catholic Church synod – the high profile meeting of its Bishops – claimed that ‘Love Jihad’ was real and was used to target Christian women. The church had in a statement released earlier this year alleged that love jihad is a reality and it was being used to target Christian women to a dangerous extent. The statement by the synod reads:
“Love jihad is growing in Kerala and becoming a threat to the social and religious harmony in the state. Christian girls are being killed because of love jihad. It is a fact that Christian girls are being targeted and love jihad is really happening. Girls are molested after faking love and then coerced into conversion by threatening to expose the visuals of the abuse. We should act and start creating awareness among parents and children about the dangers of love jihad.”
Many in the church in Kerala have criticized the synod for issuing such a generalized statement and said it smacks of Islamophobia and it is paternalistic towards women.
As I said I do not deny the possibility of some women being lured into such marriages but all investigations by the police and the National Investigating Agency have clearly shown there is no such generalized conspiracy against the Christian community.
Then why did the Church raise the bogey of love jihad? Several writers have pointed out that it was because the Church has been supporting the BJP’s anti Muslim policies. The Kerala Catholic Bishops’ Council supported the Citizens Amendment Act, 2019 brought in by the BJP by which non-Muslim migrants got a right to citizenship but Muslims did not.

Society Polarization
The Citizenship Amendment Act gives Christian immigrants who entered the country before December 31, 2014 the right to citizenship, along with Hindus, Parsis, Sikh, Jains and Buddhists.
The Hindu nationalists have systematically been polarizing the society along communal lines and with each issue they take up they garner support for their agenda of making India into a Hindu nation. The bogey of love jihad and forcible conversions serves the BJP agenda of polarization of our society.
The new laws on “love jihad” have a much wider canvas than merely addressing the non- problem of forcible conversions in the context of marriage. The Uttar Pradesh Prohibition of Unlawful Conversion of Religion Ordinance, 2020 states that no person shall convert or attempt to convert either directly or otherwise any other person from one religion to another by use or practice of misrepresentation, force, undue influence, coercion, allurement or by any fraudulent means or by marriage nor shall any person abet, convince or conspire such conversion.
The definition of allurement under section 2 (a) is wide enough to cover a wide variety of circumstances.:
‘Allurement’ means any gift, gratification, easy money or material benefit either in cash or kind, employment, free education in a reputed school run by any religious body or better lifestyle, divine pleasure or otherwise.
It would seem that the conversions of 350 pavement dwellers to Hinduism in Agra in December 2014 would attract the provisions of this new law on forcible conversion because the converter promised that if they participated in the religious function they would be given ration cards and BPL cards. This was done by Bajrang Dal activists and the Hindu Janjagriti Samiti, both affiliated to the RSS. Even if the ritual was called Ghar Wapsi and not conversion the law would look at the intent and purpose of the religious converter .
A ‘Religion Convertor’ is defined under Section 2(i) as: a person of any religion who performs any act of conversion from one religion to another religion and by whatever name he is called such as Father, Karmkandi, Maulvi or Mulla, etc.
Or take the case of the 150 Dalit families of Meenakshipuram in Tirunelveli district, who converted en masse to Islam in 1981 owing to caste oppression. A scholar who has studied the families came to conclusion that “Instead of the casteist slurs hurled at them, today, men of the converted families are addressed today as ‘bhai’ by others, which gives a sense of equality and dignity for them.”
Would the converter be booked under the new law for alluring the Dalits to a lifestyle of dignity and equality?

Control Women
In the past laws against religious conversions have not been very effective; as long as Hinduism denies people, especially Dalits, Adivasis and women the right to dignity and equality by upholding the caste system the conversions will continue. Perhaps that is why the Church did not oppose the new law. What these new laws will do will make women even more vulnerable to control by family and religious institutions.
I think the opposition to love jihad and the laws being passed on forcible conversion should not be restricted to questions of individual rights and personal liberties. There is a need to see the linkage between religion, family and fascism. Conversations on personal liberty do not necessarily make these connections.
As far back as in 1933 Wilhelm Reich made a connection between religion and family in the rise of fascism.
Chapter V of his book Mass Psychology of Fascism (1933) contains the famous statement that the family is the first cell of the fascist society: “From the standpoint of social development, the family cannot be considered the basis of the authoritarian state, only as one of the most important institutions which support it. It is, however, its central reactionary germ cell, the most important place of reproduction of the reactionary and conservative individual. Being itself caused by the authoritarian system, the family becomes the most important institution for its conservation. In this connection, the findings of Morgan and of Engels are still entirely correct.”
The family ensures the inculcation of the xenophobic nationalism in the children. Tradition, suppression and brutalized sexuality within a patriarchal family ensures children grow up to be the kind of people needed for sustaining fascism. And love which is not controlled by traditions, family or religion becomes a threat to all forms of authoritarianism.
According to one writer love matches have risen from just five per cent of Indian marriages to 30 per cent in the past decade. Each one is an act of rebellion against the control of tradition, family and religion.
But if individual acts of rebellion are to have an impact upon society there is a need to convert the love for an individual into a love of freedom and liberty for all. It means linking our individual struggles to a movement against all forms of authoritarianism within the family and religion.

(Nandita Haksar is a human rights lawyer, teacher, campaigner and writer. She lives in Goa, Delhi and sometimes Ukrul with her husband Sebastian Hongray.)