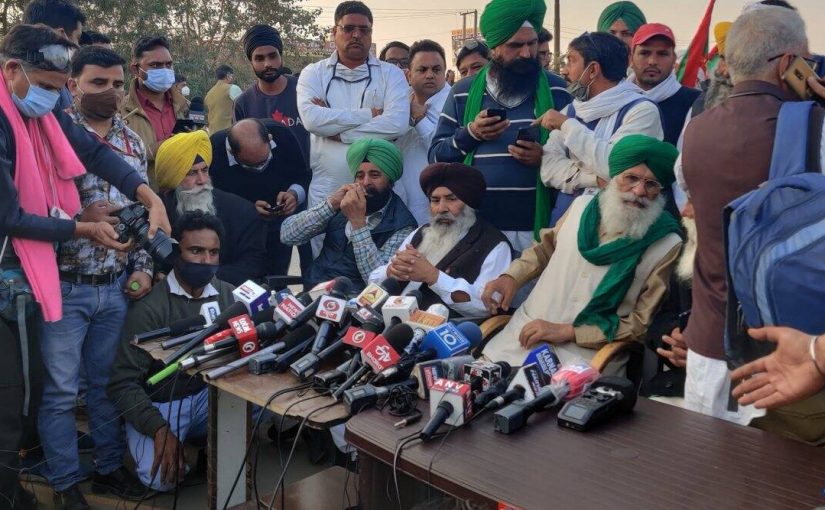 KHET-KI-BAAT: The agitating farmers are taking on Prime Minister Narendra Modi with their Khet-ki-Baat as a counter to Modi’s Mann-ki-Baat. Indeed, Modi did not make any reference to the farmers in his latest Mann-ki-baat as he has no answers to their legitimate demands

It is not any individual but the farming community particularly of Punjab and Haryana who are the heroes of 2020. They have been carrying out an agitation in the freezing cold of Delhi for the withdrawal of the three bills aimed at handing over agriculture to the corporate cronies of Prime Minister Narendra Modi, like the Adanis and the Ambanis. The farmers are setting an example by holding a peaceful agitation without obstructing any essential services. They have even been praised by the Supreme Court which has upheld their right to protest and suggested that the government should hold back the bills. The farmers have also started targeting Reliance and Adani enterprises. Millions of farmers have given up their Jio connections and destroyed Jio towers in various parts of North India. Reliance Retail outlets are also being boycotted. Goans should boycot Jio and switch to Vi which is offering a much better deal even on data…..

NORMALLY, we tried to nominate or elect a man or woman of the year in our new year issue. But this time there can be no doubt in our mind that it is the farmers, particularly those of Punjab and Haryana who are the heroes of the year 2020. The farmers of north India have since they started their protest been extended support by the farmers of Uttar Pradesh and even Rajasthan have been agitating in the bitter outskirts of Delhi now for almost three months against the three diabolical farming bills passed by the Central government.
Indeed, 20 of them have died because of the cold weather. They have been joined by the farmers of Maharashtra. And as more and more farmers from other parts of the country like the South realised the consequences of the three new bills, their numbers will grow exponentially.
Let is first understand why the farmers are agitating, because it affects not only the farmers but all of us. What Narendra Modi’s government is trying to do is hand over our agricultural fields to the Ambani and Adani families. What the Modi government is trying to do is to place the farmers at the mercy of the corporate sector. What is going to happen is that instead of buying wheat from the retailor or your quota of ration and converting it into an atta, you will buy one of the dozens of brand of atta, the most famous being the Ashirwad atta.
I don’t know how many people know that the Arshirwad atta is made by the India Tobbaco Company (ITC) which has been poisoning crores of Indians including me. I am still suffering from the consequences of smoking over 40 cigarettes a day for 40 or more years. The ITC was the first to corporatize agriculture with their E-Choupal. What they did was set up computer booths like the old telephone booths in each village in the wheat growing areas. Theoretically the farmers could go online and check about rice or wheat was in various parts of the country. ITC would than buy the wheat from them at the highest price prevailing of that day.
At least in the case of ITC the farmers had a choice. If they did not want to sell the wheat to the ITC they could always go to the local mandi. As of now there are registered mandi or wholesale outlets all over the country some of which specialise in designated agriculture commodities. For instance all the onions in the country are from Lasalgaon mandi near Nasik. So are the grapes grown in the country. All the best apples are from Kulu-Manali valleys in Himachal Pradesh. There is a story going around which dramatizes what can happen to the farmer when the big corporates enter the agricultural market.
The story goes that Adani made a study of the apple market in HP markets. Adani found that very few apple growers had storage facility. This meant that they could not store their harvest of apples and have to sell immediately to wholesalers at whatever price they were offering. Gautam Adani found that the farmers were getting an average of Rs21 for a dozen apples from the local middle man. Adani offered them Rs23 instead of the Rs21 they were getting. In the meanwhile he quietly setup a very large refrigeration warehouse. Once it was complete he dramatically lowered the price he was offering to Rs6 per kg. He and his goons had driven away all the other wholesalers employed by them. The farmers had no choice but to sell the apples at Rs6 per kg to Adani. The agitating farmers know that this will be what will happen if the corporate sector takes over agriculture in a country.

IT is the farmers in Punjab in Haryana who ushered in the great green revolution planned by noted agricultural scientist MS Swaminathan. The farmers in Punjab and Haryana managed to increase the productivity of their agriculture land by a huge percent. They were responsible for India becoming a surplus state in wheat and rice instead of being a huge importer. People as old as me may recall that in the 60s and 70s India is to import huge quantities or wheat under the PL-480 scheme from the United States. When the farmers in Punjab and Haryana discovered that it was very profitable to grow premium rice varieties like Basmati. So Punjab and Haryana became the granary of not only wheat but basmati rice also. The farmers in Punjab and Haryana are educated. They use mechanised farming including tractors and combine harvest. Some of them already have storage facilities. They made sure that they would get protection even if there was a famine or a drought by pressurising the successive governments to declare a Minimum Support Price (MSP). So if there was excess production and the prices of wheat and rice fell below the production cost they would be assured a minimum price from the government. The MSP was declared at the beginning of the harvest season and kept increasing due to the influence of the farmers particularly before very election. The farmers were also exempt from the essential commodities act which panelises traders if they sell above the fixed rate.
The new farm laws enacted by the Modi government do not give any guarantee that the government will buy the farm product at the MSP. The new laws proposed to include the farmers within the essential commodities act. Which means that they can force the farmers to sell their products to the corporates to any price they demand. The new law also promotes contract farming which means that the corporates can be gifted large amount of agricultural fields which are now lying fallow for various reasons. In the new system that the government is trying to force the farmers to accept it will be the corporate cronies of Narendra Modi who will dictate not only the price at which a product is sold but even the crop that they can grow on their field. For instance the corporates decide that they should grow Avacados which are very expensive instead of wheat and rice they will have no choice but to comply. They will lose the right to demand the price for their blood sweat and toil and tears with which they work on the fields to feel the country. They will lose the liberty to sell at whatever price they get from the market which compare to the prices of luxury products is very marginal.
At the most the farmers may be able to get Rs50 per kg of onions instead of Rs20 per kg. The Modi government objects to that though it permits manufacturers of pharmaceutical products to make a 400 to 1000% profit! It threatens the farmers with jail under the Essential Commodities Act. But does not raise any objection when an apple contractor who has set up an I-phone factory in a backward region in Karnataka pays its employees just Rs8,000 per month. They are forced to work for 12 hours a day without any overtime. This for a product which is being sold for Rs1,12,000 lakh. Which is what the farmers rightly fear. That the corporates will take over their fields and their crops. In return give them crumbs and keep the chocolate cake for themselves.
We also need to learn a lesson from the manner in which the farmers are protesting. They have refused offers of food and shelter from government of either Modi or Arvind Kejriwal. The farmers even as they have been roughing it out for three months in the bitter cold at the outskirts of Delhi, have brought their own wheat from their own fields to cook roti for themselves.
They have brought their own chakki so that they can convert the wheat into atta. They have set up a semi-automatic chapatti making machine which turns out 5,000 roti per hour! They follow the tradition of the famous free Sikh langar meals. If you go to any gurudwara including the one at Betim in Goa anyone and everyone may eat a free sumptuous lunch. No questions asked about caste, community or creed. The farmers are not obstructing the movement of essential commodities like milk and vegetables. They are not stopping ambulances or hearses. They have even been complimented by the Supreme Court which has ruled in their favour. The SC has upheld their right to protest and suggested to the government that the agriculture bills should be kept on hold. Even the SC which is considered sympathetic to Narendra Modi is convinced that the three laws are not in the interest of farmers who are people at ground level to who feed the nation.

Goans should learn a lesson from the farmers of Punjab on how to organise an agitation. An agitation is not the stoppage of traffic on the South Western Railway track on one night or another day. It is not protesting in front of the Panaji Church Square against anti-environmental projects for the benefit of the big corporates. The people of Goa are fighting the same set of people who want to grab farming land and agricultural produce grown by the farmers.
It is the same Adanis and Ambanis who want to import more coal and increase its holding capacity of Goa’s Mormugao Port Trust. They are the same corporates who want double tracking of the SWR so that more coal can be transported to the factories of Jindal Group to the thermal power station of the Adani Group in Hospet and Bellary. They are the same people who want highways to be widened. Who want the rivers to be nationalised and channelized for transportation of goods. Who want Mopa airport for the development of beach tourism in Vengurla and Sindhudurg in south Maharashtra. It would be easier to reach Vengurla in an half an hour from Mopa than to reach the Taj Exotica down south Goa which takes three long hours.
So Goans and particularly the Goan farmers should join the agitation of the farmers of Punjab and Haryana. If they want to stop the doubling of the SWR they should block it for months as the farmers are doing in Delhi. If they want to stop the moment of coal they should surround the MPT and not permit any coal to be downloaded in Goa. We now have the blessings of the SC itself which has upheld the right to protest as long as it is peaceful and does not block essential services. We salute the farmers of Punjab. Not only for protecting us from the devious and greedy corporate sharks. But giving the country a lesson on how to stage a peaceful non-violent protest to bring the government on its knees.