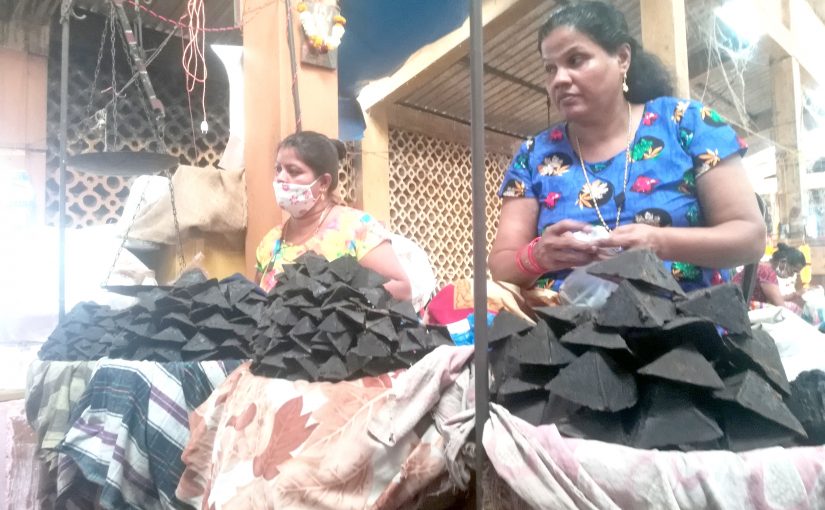 GOA’S FAMOUS MADACHI GODD! This natural dark brown jaggery cones can be found in most local wet markets in Goa during the winter months. They are a priced jaggery made from the sap of the coconut palm also called madda godd or suri godd. Goans eat this nutritious jaggery with the nachneche bakri or sannam (the Goan idli). It can also be melted into syrup and used in a variety of sweet dishes. A dash of maddache godd can bring many things to life! Retail selling price is approximately Rs120 to Rs160 per kg depending on its quality.

ANY project that the government approves must be for the common wellbeing of citizens. However, it has been months now since Goans have been relentlessly fighting to convince the government that its decisions regarding the massive deforestation at Mollem, the double-tracking of South Western Railway – all with a view to increasing the import and handling of coal, will have lethal repercussions for generations to come.
Goa’s gen next is demanding answers with regard to the life-threatening issues of ecology. However, the officials, particularly some of our elected representatives, either evade their queries or indulge in delaying-tactics or resort to indirect threats.
The present government seems to be hell-bent in choking all voices of dissent, opposition and protest, which are the hallmarks of a vibrant democracy. There is growing concern among people young and old about the a slow but steady germination of seeds smacking of dictatorship. It calls for concerted, courageous and persevering efforts on part of Goans to unite and work together to thwart the nefarious designs of a government with a hidden agenda.
In modern times people in general and the governing dispensation in particular functions along a utilitarian mindset. Whenever a decision is taken about a project our prime concern is whether it will be useful or benefit the people. The English philosopher, social reformer and founder of modern utilitarianism, Jeremy Bentham, said, “true utility constitutes in the greatest good of the greatest number.” Those who promote the interests and wellbeing of a few superfluous rich corporates and persons is no real government!
I urge all Goans to come together transcending all boundaries of caste, creed and religion to work towards the holistic development of the Goa we love and this involves paying heed to the greatest good of every Goenkar.
— Edmon Colaco, Salcete, Goa

GREAT OPPORTUNITY!
AS we bid farewell to 2020 and the world enters a new year 2021, we must remember the indelible scars of the pandemic which has disintegrated normal life as we knew it across the world. Rising to new heights now is within our grasp as various vaccination programs are inducted to eradicate Covid-19.While laying stress on individual freedoms with responsibility, the governments of the world should strive towards signing trade pacts, bilaterally and multilaterally, while allowing healthy competition and non-competition clauses for streamlining collective growth. This will strengthen health, education, commerce and most importantly, lay stress on human rights as the basic foundation and framework for a just and equitable world, in which hunger is eradicated and equality of opportunity drives the engine of prosperity all around.
Eradicating the Covid-19 pandemic should be seen not as a challenge but as an opportunity to achieve excellence in a merit-based world – when a new millennium transforms life on planet earth in such a manner that none is left behind!
— Elvidio Miranda, Panaji

KNOW YOUR GOVERNMENT!
UNION Health Secretary Rajesh Bhushan on December 30, 2020 at 2 pm, wrote a letter to all states and Union territories asking them to curb crowding in the wake of New Year, and keep a strict vigil on all events which could be potential super spreaders of the Covid-19 contagion. He further urged State governments to promptly assess the local situation and consider imposition of appropriate restrictions on Dec 30 and 31, 2020 as well as January 1, 2021.
Positive cases of the UK mutant strain may now increase in India. All contacts of affected persons have not been traced. Cases as close as in Pune have been come to light. The speed transmission of the new mutant corona virus is reported to be more than 70% currently. It’s no small matter. In Goa a number of UK-returned visitors who’re positive cases have come in, but few have been traced for follow-up details and treatment. We need positive action now!
— R Fernandes, Margao
JUDICIARY STAY FREE!
WE all need to be part of a crusade to ensure that our judiciary remains free from political interference or manipulation. The loyalty of every judge in our country is sacred in the Constitution of India.
Unfortunately, those in power want to overpower the judiciary too! There is a very disturbing disquiet over a slippery slope, down which judicial values are slithering. To ensure the highest standards of judicial independence and to ward off even the faintest trace of governmental influence on the judiciary, there needs to be at least a two year “cooling off period” for retiring judges before they accept any posting after retirement.
No government may dangle a carrot or put a price on the heads of our judiciary or senior civil servants to perform in a way that bends the rules which go against public interest in letter and spirit of the law. The need for rule of law and separation of powers between Executive and Legislature and Judiciary is paramount in any democracy for good governance to prevail. An independent judiciary can properly enforce rule of law only if it is characterized by impartiality and integrity.
As judicial independence of judges rests entirely on maintaining an incorruptible detachment from the government of the day, it cannot be allowed to be morally compromised by lobbying for cushy post-retirement sinecure postings! We have witnessed instances where judges have fixed their retirement nests much prior to even demitting office.
Currently the Indian judiciary is passing through a very turbulent phase, this “jobs-for-the-judges” syndrome could place judges potentially open to governmental influence and leaving scope for “pre-retirement judgments” being predisposed by the craving of a “post-retirement job.”
The Constitution of India is very clear on the distinct roles of  Executive, Legislature and Judiciary. There is a need of concerted efforts towards propping up highest standards of judicial accountability. The judiciary should never be manned by persons who are tilted or aligned to any political party. Judges should have the spine to crack down on illegalities of politicians, regardless of the high positions they hold. Judicial accountability must be maintained at all times with every judge conforming to the highest standards of integrity. If judges cannot independently balance the scales of justice, “the temples of justice” end up as dens of chicanery and jugglery.
The late American president Andrew Jackson believed that all the rights secured to citizens under the Constitution, are worth nothing if not guaranteed to them by an independent and virtuous judiciary.
— Aires Rodrigues, Ribandar