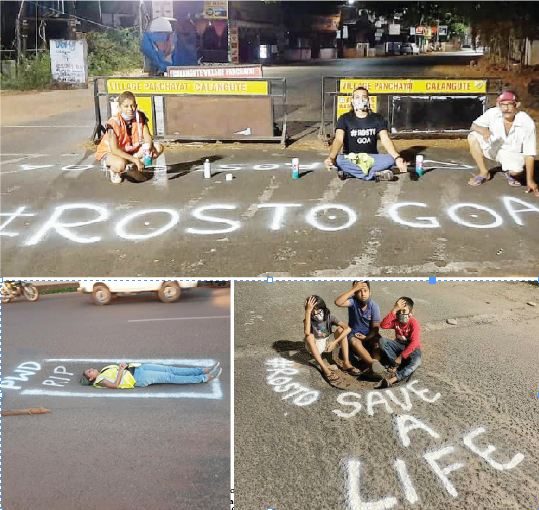 Political activist Cecille Rodrigues is leading efforts to map data on road safety issues in Goa. She has submitted a report to the Taleigao panchayat and proposes the setting up of a Road Safety & Traffic Management Committee…. this is a unique and one of a kind collaboration by Act for Goa, Nine Stack and other team members.

GOANS cannot have missed these broad bright white chalk markings to reinforce poor traffic zebra crossings and shoddy repair work of potholes and other traffic problems in need of professional attention up and down the roads and streets of Goa and especially capital city Panaji. This initiative was taken by political activist Cecille Rodrigues and her group of concerned citizens who care about the state of public roads in Goa.
Together this movement has flagged over 38 potholes and drawn attention to road safety issues in other places. Says this innovative Rosto group spokespersons, “We are not just about restaurants or food trucks anymore, but have put into place a digital app world where even potholes in Taleigao village have a place.
This out-of-the-box initiative focusing on road woes is by Act for Goa, Nine Stack and Cecille Rodrigues who is the brains behind it. For some time now the popular Rosto Campaign which has been highlighting safety issues after having flagged over 38 potholes amongst 80 other road safety issues in Taleigao villae alone on the PinIt App. This unique system of digital mapping of road safety issues, according to Cecille, is just the first step towards eliminating road hazards from Taleigao and making village’s roads safe for travel.
The mapped data was submitted to the Taleigao panchayat to be included in the Village Development Plan. With the accumulated data, Cecille has proposed the setting up of a Road Safety and Traffic Management committee in the panchayat, to deal with the road safety concerns of Taleigao village.

Says Cecille, “We have collected data by pinning issues related to road safety in and around the village of Taleigao using our PinIt App. Along with citizens help and like-minded individuals we managed to ‘pin’ traffic hazards, potholes, broken or missing signboards, unmarked speed breakers, open waste dumps and a lot of other issues on the virtual map available via PinIt. Around 38 potholes, 18 unpainted speed breakers, 24 broken or missing signboards, 13 broken street lamps, and over 4 bad stretches of uneven roads across Taleigao village, where required corrective action needed to be taken, were identified.”
In all 99 such issues in Taleigao have been geographically mapped using Google Earth software and pinned via PinIt, she said, “The PinIt app has really helped achieve what we couldn’t, for all these years. It has provided a platform to collect and store data as evidence to bring about a road safety revolution in Taleigao and the whole of Goa,” Cecille said.
The PinIt App innovation was developed by Goa-based application development firm NineStacks in collaboration with Act For Goa. The app was primarily developed to enable users to highlight issues in their immediate surrounding areas that need to be acted upon, as a step towards creating a sustainable future for Goa and to enable users to be a part of the development process in the state. The app offers 11 different categories which deal with issues as diverse as road safety, waste management, water and sanitation, health and nutrition, biodiversity, animal welfare, child welfare, education, culture or heritage, electricity and public interest or nuisance.
Jill Ferguson, a founding member of Act for Goa, explains that each village is expected to outline these type of social issues as soon as possible so they can be submitted to each village panchayat as part of their Village Development Plan. “We hope village panchayats will make use of the PinIt app to aid in the drafting of their village development plans. We are happy to share all the data crowd-sourced through the app with the panchayats for this purpose. Through this Rosto campaign, we encourage villagers to join in and use PinIt to bring these issues to light, so that the village authorities can act upon it for the betterment of every village and its people,” said Jill.

She also elaborated that one day of the week should be dedicated by concerned citizens of the village to map locations that require corrective action, and Jill suggested, “It’s always faster and easier to do it on a scooter or a bike, but one can do it while taking one’s evening stroll!” Needless to say the bottom-line of this bottom-up movement is to encourage citizens and residents to care and take action at local level for a betterment of their own quality of life in urban or village Goa.

One thought on “THE ROSTO CAMPAIGN IS UNIQUE!”