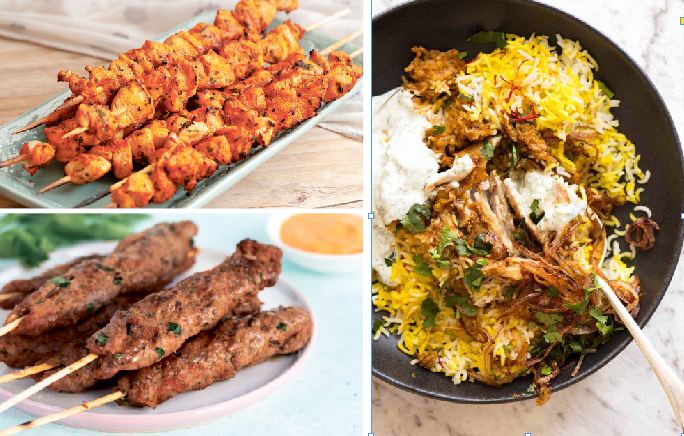 Perrenial national favorites but authentic quality is hard to find except in a few places …check out the Delhi-styled tandoori kebabs, tikkas and kathi rolls of Mofet dhaba at Caranzalen! As for biryani it is popular takeaway fare in Goa for meat-lovers with some saying a biryani is a biryani only if it is lamb or mutton biryani.

INDIAN PALATE
Have you noticed how our Indian palate has become a colonial, national, regional, even village to village affair — and yes, I would say kabab, biryani, tikka are on my list of sanctified national food popular across the country with almost all people. How often we’ve been delirious at the thought of throwing just a biryani party or bash or get-together or going away on a picnic and by way of food packing up or catering in lots of biryani, also kabab, tikka, yogurt-onion relish, chutneys and a dessert of gulab jamun, or one of the creamily delicate firni or shahi tukra!
There’s so much biryani, kebab, tikka being retailed on the on-line foodie networks that I’m totally lost about who is good, better, best. Oh well, these days it’s all a matter of trial and error when ordering food home from the plethora of caterers trying to …er…see if they can feed you to death as in living to eat or something like that. I’m happy with my curd-rice at home with shudh coconut oil friend banana wafers, thinly sliced and mildly salted and utterly delicious with a grated cucumber or carrot or apple dahi-bhat or curd-rice.
Do I hear anyone saying, Who wants to eat dahi-bhat in Goa? You’ll be surprised. On a hot January afternoon it’s ideal fare with a bit of the Society or Spice Secrets mango or sweet lemon pickle which is so hard to find. At Prashant Kamat’s fairly come lately The Organic Store I came across the Sweet Nation sweet lemon pickle in glass bottle but can’t say I like it too much, it’s overwhelmingly salty. It’s manufactured and packed by Madhav Agro Foods, Vadodara, and frankly, I want to boycott Guju products just as I want to boycott Chinese goods!
But drop by at Organic Store (in one of the lanes behind Hindu Pharmacy in Panaji, down the street where Bhonsale’s eatery is)…I’m getting terribly addicted to this wholesome store offering some interesting stuff to encourage you to switch over to a more body-beautiful friendly lifestyle and yes, I urge you to think that organic and eco-friendly must go hand-in-hand. That is if we really love Mother Earth! I favor foodie buys in glass packing and only reluctantly once in a blue way will patronize something in plastic pouches and packs, when I cannot help it.
Please make an SOS new year’s resolution to shun and boycott plastics in all the ways you can – count for something good in 2021. Be the light! As Prof Shiva Ayyadurai of Cytosolve in the US of A would say; if you haven’t caught up with his education videos on the modern human immune system, you must, do it today or tomorrow.

Cost of living going up, up, up…

More and more I try to discourage myself from eating out too much, with this kind of cost of living exercise now now and again! Okay, for example, how much would a breakfast at Kamat Hotel cost me? Never mind that some days the upma/meduvada/idli may be agreeable and some days not. Well, upma is 28.57, meduvada 66.66, idli57.14, masala dosa 85.71 (90 after addition of CGST and SGST @ 2.50%), puri-bhaji 66.66 (puri tastes good only while they’re hot, colder they become leathery or rubbery because of maida content in the flour). But lately I’ve forsaken all in favor of being tempted by the best tomato omlet of them all in town at90.47!
See, Kamat Hotel is an aam aadmi Udipi-style eatery and the hubby tells me during his early OHeraldo he liked to seek out a quiet corner here to feast on puri-bhaji or rava dosa – but those days the menu was pocket-friendly, “It was all I could afford on my salary which seemed so grand in the 1980s in Goa! Let me see, how much was it…about `4,000 per month or so for years on end.”

Presumably editors earn fatter, fancier salaries these days if they have no problem being more public relations entrepreneurs than good old-fashioned black and white editors! I’ve known how sometimes editors posts are commanded by biwi-bacche of the owner while somebody else does the nitty gritty hard work in their names for a pathetic salary. Biwi-bacche collect on salaries, plus absurd profit percentages — staff salaries and office infrastructure never improve but biwi-bacche and friends go everywhere on freebie holidays, return with colorful brochures to toss at staff and say, “Please write something nice about so and so and so and so!”
The last bit is my own addition here. I’m more interested in food than journalism these days. Lately I’ve been chasing a favorite tomato omlet – it comes large, softly savory and steaming hot from the Kamat Hotel kitchen (does the F & D do any kitchen inspections, I’d like to go along with them when they do and if anybody is inviting me, I can make a few suggestions for the good of the employees).